Noke Motivated for His Fighting Return

"Win or lose, if I walk away and people say that he fought with 100% of
himself and left his heart in there, then that’s all I can do." - Kyle Noke 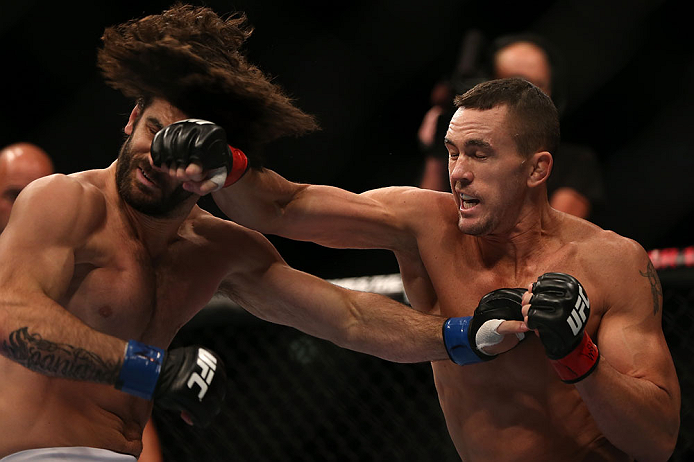 Himself, his coaches, and his country.

On April 16th at Colisée Pepsi in Quebec City, Canada, when Kyle Noke makes his walk to the Octagon, those are the three areas of interest that will be on The Ultimate Fighter: Nations coach’s mind because they are what he will be representing in his performance.

First, this forthcoming co-main event welterweight war with Patrick “The Predator” Cote will be the highest profile bout of Noke’s Octagon career. Second, every fight is a showcase of the hard work one has put in at the gym as well as the hard work that teammates and coaches from the gym have put into the fighter who enters the cage. More so, Noke has made his renowned coaches household names to Octagon enthusiasts by inviting them to supply the teaching backbone for his Team Australia on this past TUF season. Third, obviously, the Queensland resident is climbing into a cage in hostile territory, nearly 10,000 miles away from his home, with the aim of scoring an exciting win for his Aussie people.

As for the 20-6-1 pro himself, it’s been a while - about 19 months - since fight fans have seen him in action. Way back when, at UFC 152, The Ultimate Fighter 11 alum lived up to his “KO” moniker by delivering a quick TKO to former NCAA Division I wrestler Charlie “The Spaniard” Brenneman. Besides improving his Octagon record to 4-2 with all his wins via finish, it was Noke’s emphatic UFC debut at 170 pounds which he looked thoroughly lean and mean at.

The key to the victory was simple: having faith in his preparation.

“It was about having confidence in my hands again and letting them go,” states Noke. “It was basically training to where I didn’t care whether he took me down or not. I’m not going to strike as hard because I’m worried about getting taken down? None of that. I kind of got away from that. I trained so hard that I didn’t care where the fight went. The confidence I had let me use my hands to 100% of their ability. The fight didn’t last that long, but I was able to keep him at range and hit him wherever I wanted to. I was happy the way it went.”

From there, the now 34-year-old suffered back-to-back injuries requiring surgery: one for his shoulder and one for his wrist. Certainly, the rehab kept Noke on the sidelines for some of the time off, but the rest came due to accepting the role as a coach in his return to the show that initially got Noke his UFC start: The Ultimate Fighter. Following a successful season pitting Team Australia vs. Team UK on Smashes, the scrapping lads from “Down Under” were ready to rumble with the warriors of the “Great White North.” Not only did he jump at the offer, but Noke campaigned heavily for the position on social media for months in advance.

“I wanted the job,” tells Noke. “I don’t know if I was expecting it. When I got the phone call that they wanted me as coach - I was happy and excited. Before that, I didn’t really have an idea that I was going to get it; it was just a hope and a dream that I wanted to do it. I wanted the chance to represent my country. Basically, help these guys get into the UFC and give them the best opportunity I can. Going into the show, Patrick and I were on the same page about making it about the fighters and not about us. We wanted to give them the best coaching that we could. Who doesn’t love to have the opportunity to represent their own country? We fight in the UFC as fighters individually, but given the chance to do it as a team for your country? It was a great experience representing ourselves as well as our countries.”

Putting together his distinct set of assistant coaches, Noke made it easy on himself by simply selecting the men in charge of getting him cage-ready in the three major areas of a fight: wrestling, striking, and Brazilian jiu-jitsu. “I didn’t want to go up there with guys who were just my friends,” says Noke. “I wanted to bring in my coaches, so I could give the guys on the show the best opportunity to learn as much as they could. They’re my coaches in real life and I have a lot of respect for them.”

On the mats, Noke chose Israel “Izzy” Martinez, who, as a competitor, was one of the best wrestlers to come out of the state of Illinois and currently is one of the best high school wrestling coaches the state has to offer, as well as the wrestling coach for Team Jackson in Albuquerque, which Noke is a part of. Most recently, one of Martinez’s top products, Tony Ramos, won the NCAA Division I National Championship at 133 pounds for the University of Iowa.

For the stand-up, Noke brought along a taste of Australia’s MMA scene in Adrian “The Hunter” Pang. “I’ve probably known Adrian now for close to 15 years and he was one of the first guys I looked up to in mixed martial arts back in Australia,” affirms Noke of the 20-8-2 pro originally from Papua, New Guinea, who trained for years in traditional kung fu before transitioning to MMA. “I wanted him, especially, because he’s another Australian and I thought he could relate with the guys a bit more. Some of the guys already knew him from the local circuits back at home. He had a wealth of experience to teach the guys on the team and I was happy to have him.”

Lastly, in the submission department, Noke picked Roberto “Tussa” Alencar, who is a highly-regarded BJJ black belt under the legendary Carlos Gracie Junior. “‘Tussa’ is a phenomenal jiu-jitsu guy, he understands the game very well, and he understands how it translates to mixed martial arts,” explains Noke about the four-time World Nogi Champion and master of the flying triangle. “He’s just a phenomenal coach and a great athlete and he’s inspiring. He always wants to train hard, he always wants to work.”

A key to coaching is motivation, and when the cameras started rolling on TUF Nations, it was one of the cast members who took that torch and ran with it. And, admittedly, Noke and his coaches were surprised by which fighter it was: Brendan “Badger” O’Reilly.

“We saw his pictures and we thought he was going to be the goof ball of the team because he had the big sideburns,” reveals Noke. “He had a wacky picture and it stood out amongst all the guys. We thought he would be the clown of the group. But he came in and worked his butt off every day and inspired the guys. He pushed the guys to work hard every day. He’s just a great guy, honest guy. He was there motivating everyone and pushing them. I think if he wasn’t on the team, I don’t think the guys would have pushed as hard and worked as hard. He came in and lost his first fight, it was the first fight on the whole show, but he never lost his enthusiasm and never lost his push for training. He just fired everybody else up. We owe a lot to Brendan for motivating the team so much.”

Up next, it’s finally time for Noke to return to Octagon action as he is set to square off with rival Team Canada coach Cote at UFC Fight Night: Bisping vs. Kennedy. The Ultimate Fighter 4 finalist is coming off a successful drop to welterweight as well when he earned a unanimous decision win over Bobby Voelker at UFC 158. With an overall record of 19-8, Cote is known for his heavy hands and hard head, and is having a bit of a career renaissance, claiming victories in six of his last seven bouts. Only a few years ago, “The Predator” put together a four fight win streak inside the Octagon at middleweight, netting him a title shot, and surely, Cote is aiming to do the same at 170 pounds.

“I think he’s a great fighter,” asserts Noke. “He’s fought a lot of tough guys, a lot of great opponents. He’s got a strong chin, he keeps pressure, he’s got a great overhand right, and he’s good at jiu-jitsu. He’s a strong opponent, a smart fighter, and he’s been in the game for a long time and I have a lot of respect for him. I think he looks his best at 170. I think he looked a little out of shape at 185. I’m happy to fight the best Patrick Cote there is and that’s what I want and I think at 170 he’s at his best. I’m coming in at my best, so I’m looking forward to this. I know Patrick’s got a lot of power in his hands. I have been studying his game and I’m sure he’s studying my game as well. I think for me it’s worrying about his power. Trying to use my speed to move away from his power side and make it a great fight.”

On Wednesday, it’s time for Noke to shine in 2014 as a fighter, not as a coach, representing all he has improved on in the time off and to give it all he has against Canadian striker Cote. “Win or lose, if I walk away and people say that he fought with 100% of himself and left his heart in there, then that’s all I can do,” voices Noke, who will no doubt do just that, making himself, his coaches, and his country proud in the process.