"My focus is on the UFC, and I’m really happy to be fighting Anthony Johnson right now." - Rogerio Nogueira 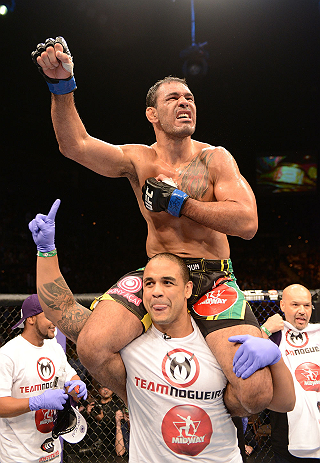 Rogerio Nogueira coulda been a contender. In boxing.

A Bronze medalist in the 2007 Pan American Games and a 2006 and 2007 amateur champion in his home country, the Bahia native had the potential to be that rarity of rarities – a serious Brazilian threat in the sweet science.

The fact that he was having this success in the amateur boxing ranks while he was beating fighters like Dan Henderson and Alistair Overeem and engaging in a classic with Mauricio “Shogun” Rua makes his prowess even more impressive. But he isn’t looking back with any what ifs.

“I’m just focused on MMA,” said Nogueira, who takes on Anthony Johnson in the UFC Fight Night co-main event in San Jose this Saturday. “At this point I just want to go back and beat the top-notch guys and be back at the top. I won a bronze medal in the Pan American Games, but I have no regrets. My focus is on the UFC, and I’m really happy to be fighting Anthony Johnson right now.”

He means it too. Returning to the Octagon for the first time since his UFC 156 win over Rashad Evans in February of 2013 (if you want a frame of reference for how long he’s been out, that’s before Ronda Rousey even debuted in the UFC), Nogueira is healthy, happy, and loose before this week’s fight, a trio of traits that he hasn’t felt in a long time.

“What I miss the most is being in the Octagon,” he said through translator Jorge Guimaraes. “I’m very happy to be back and to put on a great show.”

Some wondered if it would ever get to this point. The twin brother of former PRIDE and UFC heavyweight champion Minotauro Nogueira, Rogerio, at 38, is the veteran of 26 pro MMA fights and his share of wars. But it’s his body that has challenged him more than his opponents have over the last few years.

Staying fairly active in his early run in the UFC, Nogueira went 2-2 with wins over Luiz Cane and Jason Brilz and losses against Ryan Bader and Phil Davis. But after a first round TKO win over Tito Ortiz in December 2011, the injuries began to mount.

A 2012 fight against Alexander Gustafsson was scrapped, and when Nogueira finally returned to face – and beat – Evans, it was after 14 months away.

Hoping to get back in action fairly quickly, Nogueira again got bit by the injury big, this time forcing the cancellation of a rematch with Rua in June of last year. So when he makes his walk to the Octagon on Saturday, it will be nearly 18 months since his last fight.

“It’s been happening lately, and last time against Rashad the same thing happened,” he said of his injury woes. “And I came back well-prepared (against Evans) and pulled it off. I trained really well for this fight, and I think I’m going to pull it off.”

If he does, that would be three straight against a UFC Hall of Famer, a former UFC champion, and a top 205-pound contender. Of course they will have come nearly three years apart, but you can’t argue with a streak like that. And for Nogueira, that’s the point.

“I see this as another great fight for my career and it’s a fight that’s going to put me back on track in the rankings as well,” he said. “I’m always aiming for the top, and of course I want the title. That’s my goal.”

Can he make it? If he does, I hate to use another boxing reference, but that would be some Rocky story.

“I trained very hard for this fight,” he said. “I trained better than I did for Rashad, I’m in top shape, and the fans can expect a Rogerio that is going to get in there with a lot of attitude and who’s looking for the knockout.”