Nogueira - The Roar of the Old Lion

"The main goal here is to face the best and to stay among the best, so I’m testing myself in this contest against Davis." - Antonio Rogerio Nogueira 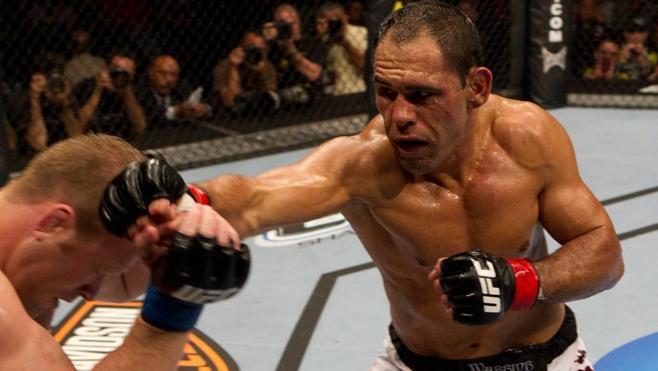 Every sport has its transitional time, when a new generation emerges to keep everything evolving, sharpening what the pioneers built from the beginning. But in MMA’s case, a unique situation occurs when the new generation of the sport collides with the tough veterans.

These veterans, who have been fighting since early 2000 and have passed through a variety of opponents and rule sets, now face the newcomers with their undefeated records and the extra motivation that to become a legend you have to beat a legend.

This clash of generations was experienced on the big stage not once, but twice, by this weekend's UFC Fight Night headliner, Antonio Rogerio Nogueira. Lil Nog compiled a 1-1 record facing fellow Brazilian Luiz 'Banha' Cané and TUF 8 winner Ryan 'Darth' Bader, and the list of dangerous prospects he has faced increases on Saturday, as he faces power wrestler and undefeated prospect Phil 'Mr. Wonderful' Davis.

Breaking down the experience factor, when Mr. Wonderful debuted in MMA, Nogueira had already fought 18 times. However, when we bring it inside the Octagon - the new blood fighters have dictated the pace, as evidenced by matches like Lil Nog's last fight against Bader, Cain Velasquez vs. Minotauro Nogueira, and most recently, Jon Jones vs. Shogun Rua. Nogueira sees the new lions coming, and even though he was expecting a highly anticipated match against former UFC 205-pound champion Tito Ortiz, who was replaced by Davis, the Brazilian sees the potential of a good fight still intact.

"The Ortiz fight was something I wanted for a long time, and since I joined the UFC he was the man I wanted to face," he says. "I waited a long time until everything lined up and we could meet inside the Octagon, and I was a bit disappointed when he was sidelined. But the main goal here is to face the best and to stay among the best, so I’m testing myself in this contest against Davis."

With due respect, Nogueira knows that Davis is for real - but he doesn't agree that the new blood is going to run over the veterans. For him, everything is based on the style, and as we know, styles make fights.

"Fighting is not like mathematics; it's not an exact formula,” he says. “It’s like saying that a guy who beat me would easily beat a guy who I defeated. It's not like that. For this fight against Davis, everything will be based upon the styles and who's better trained, not the old and new generation."

Lil Nog talked like that mainly because he felt that bad taste when his style didn't mesh with his opponent’s in his last fight against Bader. Bader scored some takedowns and imposed his game plan over the standup strategy that the Brazilian brought to the table on his way to a three round decision win. Yet the Brazilian Jiu-Jitsu black belt collected these past errors and he expects to have them fixed when he faces Davis.

"In the defeats we learn," he says. "Takedowns are a very important part of the game and I realized that fighting in UFC on two different occasions. Jason Brilz (at UFC 114) took me down and worked inside my guard; Bader didn't, but he scored with throws effectively. My goal here is push the pace on the feet, look to damage him there, and if the fight goes to the ground, I need to stay on top. Anyway my real objective is to knock him out and not let it go to a decision."

That is an optimistic goal if we consider that Davis is a NCAA Division I All-American and winner of the NCAA title in 2008. In other words – at some point in this fight, we know that Nogueira will be taken down. But the Team Nogueira founding member has the antidote, and it's when we think about his training sessions without beasts like Anderson Silva, Rafael Cavalcante, Ronaldo Souza, Minotauro and Junior dos Santos due to injuries and different locations, that Nogueira reveals that preparing with the new blood gets you ready to clash against one of them.

"The new guys here want to prove themselves too, they want to show that they’re worthy," Nogueira says, referring to fighters like Andre Santos, Thiago Goncalves, Igor Fernandes, Wagner Prado and former WEC 170-pound title challenger Brock Larson. "I mixed my experience of training and fights with some of those guys here that have more experience than I do, and even though Larson doesn't possess wrestling credentials, he has a wrestling base and he's helping a lot, along with Olympic wrestling participant Antoine Jaoude (Athens 2004). So don't get me wrong, we have high level training here."

1-1 against the new generation, Lil Nog expects to roar louder than Davis, using his experience to stop his adversary's attributes. It’s a not so secret weapon, as he calls on the the style he forged in old school battles in Japan against the undefeated rising star.

"The guy is new, and he’s good. He was national champion in wrestling and four times an All-American. He has an interesting record (8-0) and has a reach advantage, so he's a guy to take with special care because his will makes him dangerous. But on the other hand, he does not have much experience in MMA."