Amidst Difficult Circumstances, Dan Hooker Continues To Put On Impressive And Entertaining Performances
By Zac Pacleb, on Twitter @ZacPacleb • Oct. 11, 2021

The term “built different” is thrown around rather flippantly in the sports world, but few live up to that billing quite like fighters. Among that subgroup, even fewer embrace the irregular as comfortably as Dan Hooker.

A lot of it is due to necessity. Both he and his UFC 266 opponent, Nasrat Haqparast, ran into visa issues ahead of their bout, and they needed social media-driven campaigns to get clearance soon enough to make it to Las Vegas the day before official weigh-ins. After successfully making weight, Hooker came away with a unanimous decision win, and instead of hopping on a plane back to New Zealand, he opted to stay in Vegas to prepare for a fight with the surging Islam Makhachev a month later at UFC 267.

“No one else is doing it in the situations I’m doing it,” Hooker told UFC.com. “No one is in the Top 10 and going through the kinds of things I’ve been going through in these fights, and I’m still coming up and showing up and putting on a show for everyone. I definitely can garner a lot of confidence from that.”

It's that same confidence that prompted Hooker to raise his hand and welcome Michael Chandler to the promotion when it seemed like the newcomer was having a difficult time finding a matchup for his debut, and even though that fight didn’t go Hooker’s way, his confidence has only continued to grow.

When Rafael Dos Anjos fell out of his anticipated matchup with Makhachev, Hooker stepped up to the plate once again and agreed to the fight in Abu Dhabi. The casual eagerness with which he approaches these opportunities makes him a fan favorite, and Hooker also feels love from the UFC as well.

“I definitely feel like they appreciate the stuff that I do,” Hooker said. “I’ve done a lot of heavy lifting for this company over the years on the fights that I take and jumping into all the fights that these guys want to take to keep these guys busy, and I put every opportunity that’s presented to me. You don’t see a lot for a long time in your career. This is definitely one of those where the UFC says, ‘Hey, we appreciate you and what you do for the UFC.’ I feel good.”

A Kiwi In Vegas

For the next month or so, Hooker’s plan is to live in Las Vegas and train with coach and cornerman Frank Hickman, who is in communication with City Kickboxing head coach Eugene Bareman about the day-to-day work and game plan.

To a degree, Hooker stepping into the bout was humorously unsurprising, but it’s also a fight that makes sense. After a pair of dominant wins in 2021, Makhachev is in need of a signature win to push his way into the title conversation. The same goes for Hooker, but he’s also just interested in the matchup from a martial arts point-of-view. It’s a classic striker-vs-grappler matchup, and Hooker feels like he has “all the tools” to stuff Makhachev’s takedown attempts and force the issue in the standup game.

Agreeing to the fight also sparked a second wave of adulation after his win at UFC 267. Already praised for his efforts in keeping the fight alive amidst his visa hang-ups, MMA fans, peers and pundits alike took turns giving Hooker flowers for his attitude toward it all. Hooker doesn’t really take any of that to heart, though. He’s just doing what makes sense to him.

“I never let that kind of talk get into my head or blow me up to something it’s not,” he said. “I’m just being myself. I just like to get out there and fight, so to get another opportunity, I don’t see why I wouldn’t take it.”

Although a quick turnaround is normally physically and mentally taxing, Hooker is in good spirits in part because he can actually prepare for the fight. Because of the COVID-19 lockdowns in New Zealand, Hooker said his training for Haqparast consisted of “sweet nothings” other than some shadowboxing and running.

Even so, his main motivation in his last fight was to show breakthroughs he felt he made in the last few months – a mission he feels he accomplished.

Against Haqparast, Hooker was controlled and clinical. He pressured his foe early and kept himself out of range of his opponent’s powerful punches, and when Haqparast turned up the pressure in the third round, Hooker snuffed it out with some smart grappling.

It’s a testament to the work Hooker put in not only the first back-to-back losses of his career but also to his long journey as a mixed martial artist. He calls the loss to Chandler the worst of his 31-fight resume, but it realigned his shifting approach to fighting. Long considered a brawler, Hooker hoped to display his technical prowess against Chandler. The ensuing product was a bit more of a reserved – or less charitably, gun-shy – Hooker at UFC 257, but in the lead-up to his last fight, Hooker thinks he found the right balance. 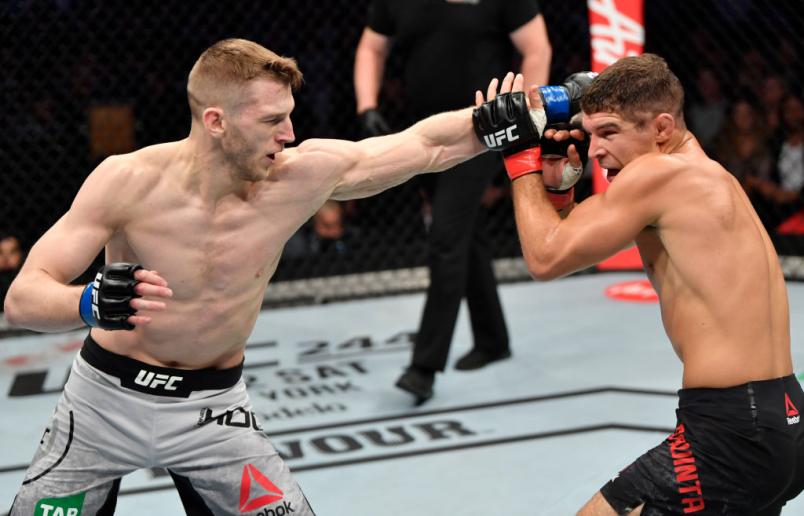 “It’s just martial arts. It’s just a huge contradiction. Everything in martial arts contradicts everything else. You have to dedicate your life to martial arts and to being a balanced human and good in approach, but then we get into the cage and fight each other for money, which completely contradicts the whole notion of a martial artist’s lifestyle.”

To be fair, the 31-year-old seems to already have a good grip on the prizefighter portion of the job. As he climbed the lightweight rankings, Hooker made sure to make the most of each of his post-victory Octagon interviews. The same was true at UFC 266, where he took his chance post-fight to name-check Beneil Dariush, who is also in search of that high-profile win to break himself into the title-shot conversation.

Hooker said he does usually check the landscape of the division before his fight so he has a callout ready to go, but the content of that callout comes more spur of the moment and adrenaline-driven.

Frankly, Hooker is good on the mic, and his most-recent offering was more of the promo-cutting same.

“That was a good one,” Hooker said. “Say it with your chest. Say it with some mana, you know what I mean?  They’re fighting words. I’m not shy. They’re fighting words. What am I supposed to say to the guy? Like, ‘Oh, hey, you want to come down to a tickle party?’ No. I’m going to say, ‘I’m going to tear your head off,’ because what do you want? You want the guy to be threatened so much that he wants to defend himself, he wants to fight back. It’s genuine. It’s nothing fake about what I’m saying. If you duck me, you are a coward. If someone said that to me, I’m fighting him. That’s it (laughs). I’m just doing what would work on me.”

Fighting For Something More

Hooker has come into his own voice when it comes to speaking on topics outside of mixed martial arts, namely the hoops he had to jump through as an athlete in New Zealand. He admits it feels a little weird because he just feels like a normal guy living in the suburbs, but his impact came to the fore when politicians bring up some of the comments he and his City Kickboxing teammates have made regarding the difficulties they’ve had traveling and training.

He added that part of New Zealander culture is to “not complain,” but with the spotlight on him during UFC 266, he was just “merely just explaining (the) situation,” and more athletes in the country have followed suit.

Those issues are why Hooker and other City Kickboxing fighters have said they plan to all move to the United States in the near future. Hooker’s teammates Kai Kara-France and Brad Riddell are lined up for December fights but don’t have vouchers to return to the country, and Israel Adesanya posted about the impending move on social media. They all have expressed just wanting to make the most of their time in the sport, and another part of that is wanting to honor their teammates who’ve passed away recently. Adesanya dedicated his most-recent title defense at UFC 263 to Fau Vake, who was murdered earlier in the year, and Hooker did the same after his victory over Haqparast. At their gym in Auckland, they have murals of their fallen teammates and hope to honor them with their work.

“We dedicate everything going forward because now that they’ve passed on, we’ve got to do it for them,” Hooker said. “They were going to do it. All these guys that have passed away, they absolutely loved martial arts. They were lifetime martial artists, so now it feels like if I pack it in or sit back or don’t train as hard, then I’m just wasting this opportunity that I’ve been given because he got taken away, and I’m still here.”

The tight-knit nature of the City Kickboxing crew is clear to anyone who is sees them cheering each other on during one another’s fights, and that deeper drive only emphasizes it.

For Hooker, it’s part of why he felt so driven to display his marked improvements in his last fight, and it’s just another reason to make the most of every opportunity that comes across the table. The losses to Poirier and Chandler set him back on the lightweight ladder, but the resolve he continues to show in the face of adversity is nothing short of inspiring. On October 30 in Abu Dhabi, he has another chance to provide another example of the determination that distinguishes himself among his peers.

“Even though I’ve taken some losses, I can grow and develop because I spend that time in the gym,” Hooker said. “I feel like my ego has been shattered so many times, it’s in liquid form now. It comes back. A lot of people think that it doesn’t come back, but trust me, you get your ass kicked, you take some time, that fire will reignite, and it does every time.”