Canadian Bantamweight Noah Ali Uses Lessons Learned From UFC Fighters Hakeem Dawodu And Chad Anheliger To Reach New Levels. See What He Had To Say Before Unified MMA 44:
By E. Spencer Kyte, on Twitter @SpencerKyte • May. 3, 2022

Noah Ali began his professional mixed martial arts career almost a dozen years ago, battling Ryland Coventry to a draw at Rumble in the Cage 39.

His second fight came nearly two years later and ended in just over three minutes, with Ali on the wrong end of the first-round finish. Stumbling out of the gate did not deter him, and the Calgary-based bantamweight closed out the year by earning his first two victories before adding three more, including a 51-second finish against his current training partner and UFC bantamweight, Chad Anheliger.

For the next three years, Ali remained as active as possible on the Western Canadian regional scene, building a 9-3-1 record through his opening appearance of 2017 before a pair of losses to far more seasoned foes slowed his momentum.

Over the next four years, the realities of life, the challenges of securing fights on the regional scene, and the global coronavirus pandemic limited Ali to just a single appearance — a third-round stoppage win over Michael Hay in December 2019 — but it wasn’t for a lack of trying.

“After losing to Bendy Casimir, two or three months later, I ended up leaving Champion’s Creed gym for a bit,” said Ali, tracing his steps through the last four or five years ahead of his return to action later this week at Unified MMA 44, where he faces Gabe Sagman for the promotion’s vacant bantamweight title. “I had started a new job selling cars, and I had a couple fights fall through during that time. My last fight, I was supposed to fight him prior to that, but he had gotten injured.

“I ended up fighting him, and then COVID happened,” continued Ali, who carries a 10-5-1 record into Friday’s contest. “Even when COVID was going on, I was still trying to get a fight with Jamie Siraj, who used to be the champ for Unified, but he kept having health issues and having to pull out, so I kind of just had crappy luck with getting fights.

“I’ve never said I was done,” he added. “I’m going to fight until either the doctors tell me I can’t any more. I want to fight as long as Lee Mein.”

Given that he just recently turned 37, Ali still has two decades of fighting left in him if we’re going on the Mein measurement.

Jokes about the Canadian MMA staple aside, Ali, who made his way back to Champion’s Creed following his brief sabbatical from the gym, recognizes that the time he’s already logged in the fight game and the experiences he’s been through have played a vital role in preparing him for the moment at hand.

On top of that, the fact that he gets to challenge for championship gold in his hometown has him champing at the bit to get in there and mix things up with Sagman on Friday.

“This couldn’t have come at a better time, especially with the losses that I’ve had, fighting some of the vets that I’ve fought,” he said. “I needed to go through those fights to get to the mentality and the experience that I have now and that has prepared me for this fight.

“It can’t get better than this,” continued Ali, who hasn’t fought in Calgary since his victory over Corey Gower in January 2017. “It’s an opportunity that may never come again —fighting for a belt, main event, my city; I jumped all over it and I’m super-excited for it.

“This is one of the first times that I’ve been so eager to get in there. I’ve always liked fighting, but this is the one I’m most excited about.”

In addition to being excited, Ali is buoyed by the work he does on a daily basis alongside the quality cast of teammates and coaches at Champion’s Creed, including a pair of UFC standouts that scored victories of their own earlier this year.

Featherweight Hakeem Dawodu got back into the win column in February, collecting a unanimous decision win over former Ultimate Fighter winner Michael Trizano to bring his record to 6-2 inside the Octagon and 13-2-1 overall.

After landing a contract with a win on Dana White’s Contender Series last fall, Anheliger stepped into the UFC cage for the first time two weeks after his teammate, collecting a third-round stoppage win over Jesse Strader to push his overall winning streak into double digits.

“What more could you ask for?” Ali said when asked about the impact training at Champion’s Creed and working with the likes of Dawodu and Anheliger have done for his career. “We have guys that are amateurs taking it to me, and then I have the vets like Chad and Hakeem, who have the experience and have been through it.

“It’s motivating, but it also builds a little more confidence because you know what they did, what they went through.” 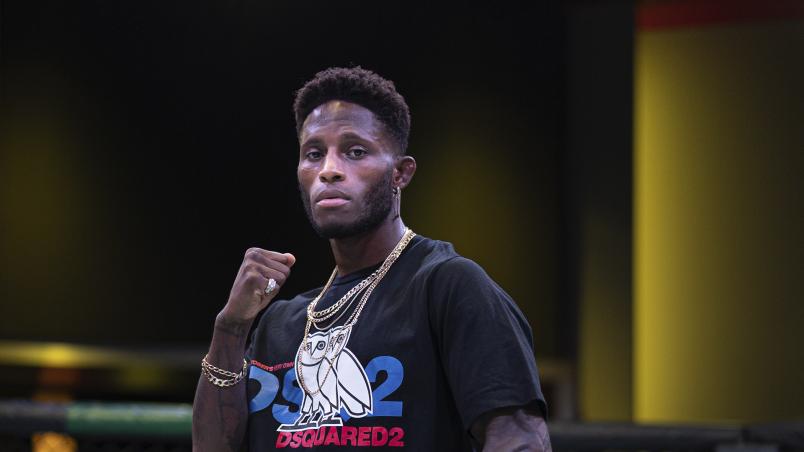 Hakeem Dawodu of Canada poses for a picture inside the UFC APEX at media day for UFC Fight Night: Hermansson vs Strickland. (Photo by Katie Schmeichel/ Zuffa LLC)

While some fighters have come to dislike the idea of competing in their hometown due to the persistent obligations and constant inquiries about tickets (or general fight week hook-ups), Ali hasn’t faced any of those challenges, and relishes the opportunity to get in there and mix it up with Sagman on his home turf.

“He’s a pretty relentless grappler and he has striking experience, too, so I’m ready for anything that he’s going to bring,” said Ali, assessing what his Ontario-based opponent brings to the table. “I do expect more of a wrestling, grappling match. If it’s a standup match, even better; I’m sure the fans would like that.

Find Out How To Watch UFC 274: Oliveira vs Chandler

“I’m ready,” he added. “We’ve prepared for him, and I definitely see myself finishing him. I think I’m going to be able to get him.”

So has he let himself think about how he’s going to feel if he turns that forecast into fact on Friday and gets to stand in the center of the Octagon triumphant, with the Unified MMA bantamweight title around his waist?

“I’m visualizing that every day,” Ali said with a laugh. “I’m living it like it has already happened.”