No Turning Back For Mana Martinez

Bantamweight Here To Make The Most Of A Hard-Fought Road To The UFC
By Thomas Gerbasi, on Twitter: @TGerbasi • Feb. 10, 2022

When you find out that UFC bantamweight prospect Mana Martinez was born of Mexican and Filipino descent, it’s hard not to think that the 25-year-old was destined to become a fighter.

“Maybe I didn't have a choice,” laughs Martinez, who faces Ronnie Lawrence this weekend in his hometown of Houston. “My father actually had a couple pro fights. He went 2-0 and he was doing open-hand pankration. They weren't wearing gloves and the only punches that were allowed to the face were open-hand slaps and closed-fist to the body. He grew up doing that, and my mom had a little bit of a boxing background.”

And once Leomana turned four, he was put in a karate class and the die was cast.

“I fell in love and I haven't turned back since,” he said. “It's been a lifelong journey and you could say that maybe I didn't have a choice, but I wouldn't want to have it any other way.”

That love of the game is evident when you watch Martinez fight, and it’s clear when he talks about it that this isn’t simply a way for him to earn a paycheck. He’s after more than that.

“I don't want to settle for just being regular or average,” said Martinez. “I want to be great and collect some belts before this whole career of mine comes to an end. I've always had that competitive drive and I hate to lose; I don't like it one bit. If you look back at when I fought on Dana White: Looking for a Fight and I got to speak on the mic, I said it straight up: I want to be the best and I know to be the best I gotta fight in the best organization, and that's for the UFC. So here I am in the UFC now, second fight in my hometown, an amazing opportunity and it's just gonna be another step in this journey to becoming the best.”

That win over Jose Johnson in front of the UFC President at Fury FC 46 last May came eight months after a submission loss to Drako Rodriguez on Dana White’s Contender Series that snapped a five-fight winning streak and was the middle victory in what is now a three-fight win streak. In August, Martinez made a successful UFC debut with a split decision win over Guido Cannetti, and it was an emotional victory for “ManaBoi,” who saw his longtime coach Saul Soliz pass away just 11 days before the bout.

When it was over and he returned to Houston, he got a message from UFC vet and renowned coach James Krause. 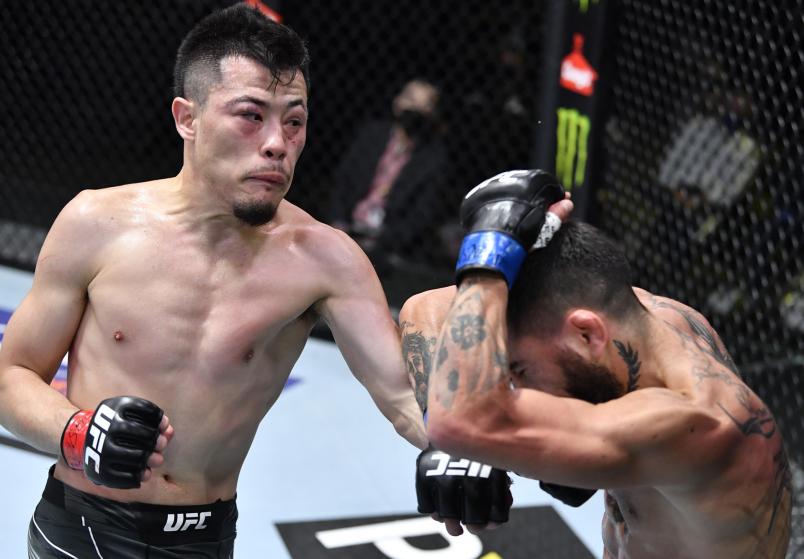 “After my last fight, literally as I got off the flight from Vegas back home, Krause sent me a message,” said Martinez. “He had seen what happened with my coach and he opened his doors to me and said he would love to have me at his gym.”

It was an offer he couldn’t refuse, even though he still puts in work at home with the Metro Fight Club. So after talking it over with his family, Martinez went out to Missouri for a camp with the Glory MMA squad.

“We felt like this was the right decision and I definitely feel like it has been,” he said. “I'm training with a lot of UFC guys and getting to learn from Krause and all the other coaches here has been an amazing experience, an amazing time, and it definitely helped level up my game.”

It’s another example of Martinez’ dedication to the sport and his desire to be more than an average fighter, because not too many 25-year-olds in the UFC and on a three-fight winning streak would leave their comfort zone to sharpen their tools when things are already going well.

“I don't want to have something happen and there be any doubt in my mind, like, ‘Oh man, what if I would have went to go train with James Krause earlier,’ or ‘What if I went to train at this gym earlier?’ I don't want there to be any doubt when I look back at the end of my career. So me being 25, which is still relatively young, I felt like this was the right choice. I have no kids, no girlfriend, nothing to attach to back at home, so coming out here and getting this experience just to literally eat, sleep and train has been awesome. And I've discovered a lot about myself too.” 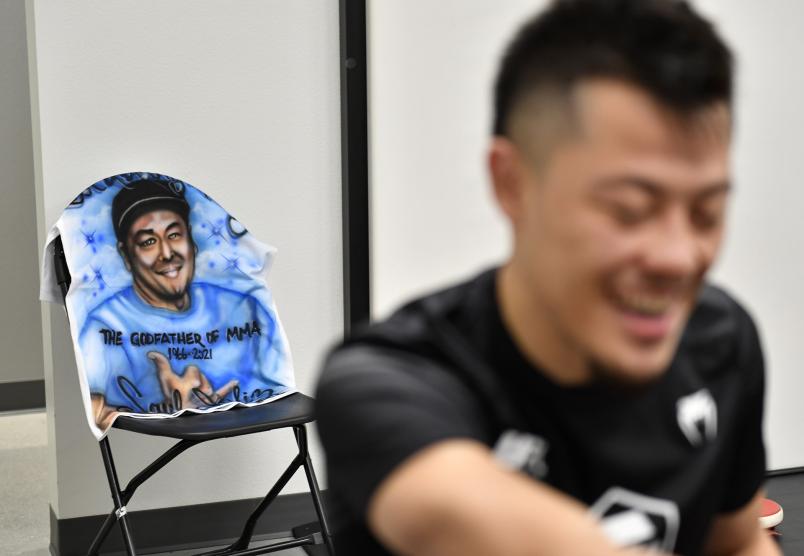 A shirt honoring the late Saul Soliz is seen in the dressing room as Mana Martinez has his hands wrapped prior to his fight during the UFC Fight Night event at UFC APEX on August 28, 2021 in Las Vegas, Nevada. (Photo by Chris Unger/Zuffa LLC)

Getting to the UFC has also prevented some strife at home, as Martinez explains that his father Gil had been hinting at taking a shot at improving that 2-0 record.

“He said, ‘You better hurry up and get to that UFC level because I'm starting to slim down,’” laughs Martinez. “‘We might have to be the first father-son on the same promotion.’”

Upon hearing this, mom Leona put in her two cents.

“Gil, we're gonna divorce if you try to make a comeback fight.”

Gil and Leona’s son Mana laughs. Yeah, he didn’t have much of a choice.