No Time to Hesitate for Scott Jorgensen

"My fans know exactly what to expect. They know I’m
going in there to get after it. I’m not going to hesitate or wait
around." - Scott Jorgensen 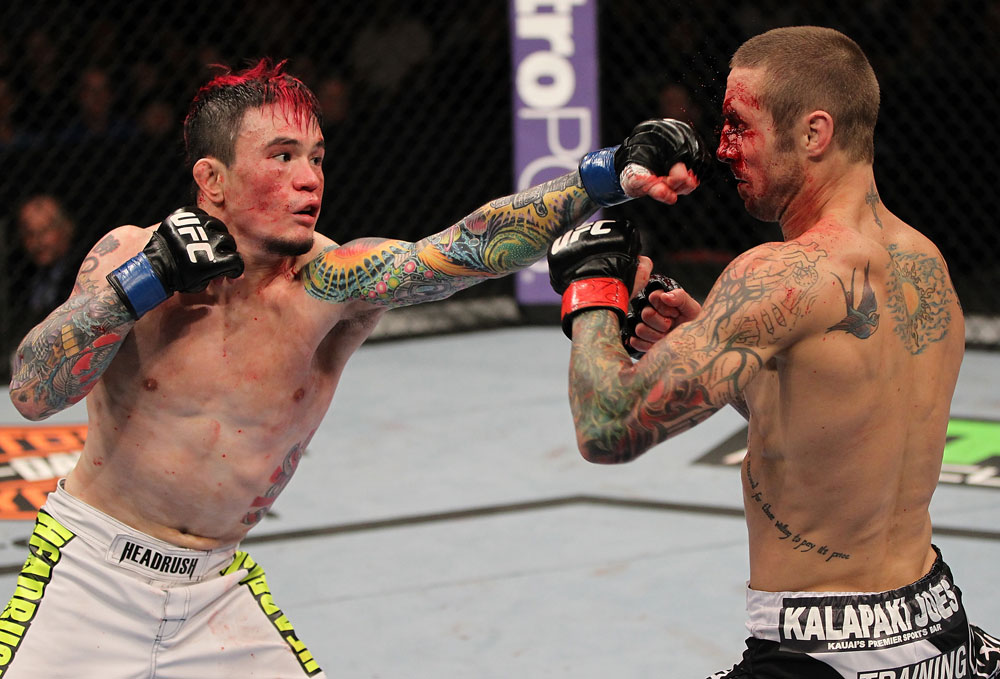 When Scott Jorgensen’s name is on the card, an action-packed fight is guaranteed to follow. The former three-time Pac 10 wrestling champion turned mixed martial artist has built a solid reputation as a fighter to watch every time he steps into the cage.  Working behind a fast-paced attack and put away power in his hands, Jorgensen rose to become one of the bantamweight division’s top fighters.

Unfortunately for the former Boise State standout, his last two outings have yielded difficult results. After dropping a decision to current interim champion Renan Barao, Jorgensen was eager to bounce back into the win column when he faced Eddie Wineland at UFC on FX 3 in June.  In the fight with the Indiana native, Jorgensen failed to find his rhythm, and suffered a second round knockout in the process.

The loss sent Jorgensen back to the drawing board and with re-ignited determination. He is looking to re-emerge from his training as a better version of himself and, when he steps into the Octagon against John Albert at UFC on FOX 5 in Seattle on December 8, get the win in exciting fashion.

“Right now John is just another opponent,” Jorgensen said. “I’m stepping into that cage, and for the first time in my career, I’m coming off two losses. There is definitely a little bit of disappointment there over my last two performances, but it has been a learning process. I’m changing some things up and evolving my game. I’ve been fighting professionally since 2006 and never changed anything.

“Now I’m opening things up, evolving, and taking a look at the entire sport. It used to be the ‘let’s go hard’ and force everything mentality, but I’m changing things up.  It’s been a good training camp. I’m very excited for this fight. I’m not sure where I’m at on the card but I’m going in there to put on an exciting fight.”

While Jorgensen’s skill set continues to progress, his ability to excite a crowd on fight night has never been a concern. He is a three-time Fight of the Night recipient (UFC and WEC) and believes his style is custom-made to entertain. That being said, he is fully aware his hard-charging style has created problems for him in the past, and the 30-year-old is focused to shore up the holes to get back into the win column.

“Going back to my wrestling days I’ve always had exciting wrestling matches,” Jorgensen said. “I’m willing to take risks where others may be more on the cautious side. I fight to have fun but there is definitely more there. I love the competition, the ability to train, do what I want, and live a life I like that provides for my family. I really do enjoy fighting and me being able to enjoy that doesn’t mean going out there and lying on a guy or dancing around to avoid everything. I fight to fight.

“I want to get in there and hit you with my best shot. I want to see if I can take some of yours and I’m going to come out on top. My approach to my last couple fights has been ‘You are going to hit me and I’m going to hit you as hard as I can. Let’s see what happens.’ I have a little bit more of a game plan that I’m going to follow this time around. I’m going out there to put on an exciting fight. This sport is about growing as a fighter, a brand, and helping the UFC grow into the biggest sport in the world. No one wants to watch boring fights.

“The biggest thing I’ve learned along the way as I can’t go into a fight thinking I’m going to force things. That is what I’ve done in my last few fights. As soon as I start getting hit I begin to get more emotionally involved in the fight. I have to stay calm, not let my emotions take over, and allow my pride to step in. Once my pride kicks in then we are in a fight. You can hit me as hard as you want. We are going to stand there and trade and I’m going to win this.”

After making a career based on a “throwing caution to the wind” style, Jorgensen is learning to adjust and adapt. The past two outings haven’t gone his way, but the process has yielded lessons Jorgensen feels will elevate his game from this point forward.  The former number one contender is looking to put his hard work on display in Seattle, and he plans on bringing the fight directly to Albert’s doorstep.

“After so many fights, you learn that a game plan is a game plan for a reason,” Jorgensen said. “When I was winning we were sticking to game plans. I normally don’t watch tape but we actually did that for this fight. My entire team of guys sat down, took notes, and put together a plan. My approach has changed and it’s a big part of my evolution as a fighter.

“As far as progressing from a wrestler to a mixed martial artist, the biggest thing that has slowed me down is the fact that I learned how to strike somewhere along the way. It’s like a new shiny toy at Christmas. You are not going to play with your old toys. You are going to go out there and use the new things you have.

“I’m also 5’4 fighting guys who are taller than me and I can’t be giving up that much reach and think I can just go out there and box. I have to utilize the other tools in MMA.”

While Jorgensen has found a way to put his power on the chin of his opposition, the re-discovery of his wrestling pedigree has been a valuable part of the evolution process. Since his time in the WEC, Jorgensen has been one of the weight class’s most tenacious grapplers. Getting back to the roots which provided his initial success, in addition to the new tools discovered along the way, have “Young Guns” eager to hit the Octagon in Seattle.

“My last few fights may not have reflected it, but I know for a fact I’m one of the best wrestlers in the division,” Jorgensen said. “It’s just a matter of when I choose to use it and what I’m using it for. If I’m using it to take you down or keep you there or if I’m using it to set up my hands and land another big punch; there is a difference there. It comes down to the choices you have to make.

“I have to remember where I came from and keep it that way. This is MMA. It’s not just taking your opponent down and hitting him with punches and elbows. It’s about keeping them guessing. I have the ability to dictate where the fight occurs. Whether it is against the cage, on the ground, standing up, on the ceiling, whatever – I dictate it.”

With a new approach and focused on the fight ahead, Jorgensen’s sights are set on Albert. He is confident the TUF alum will not bring anything to the table the veteran hasn’t experienced before, and he has every intention to leave the Octagon victorious.

In the process of doing so, fans will be treated to an exciting fight with action that touches every inch of the canvas. It is this brand of non-stop, full-throttle attack which has made Jorgensen a favorite amongst MMA enthusiasts, and he has no plans to disappoint on December 8th.

“My fans know exactly what to expect,” Jorgensen said. “They know I’m going in there to get after it. I’m not going to hesitate or wait around. I’m going to step in there throwing punches and kicks. I’m going after takedowns and I’m going to keep going and going. I’m coming in to hit him and cut him. I’m going to hurt him and beat the hell out of this guy.

“I have a great fan base behind me and they are very appreciative of the way I fight. Every time I compete I make more fans so I’m doing something right. Whether I win or lose inside that cage, I am making more fans because I’m not afraid to get in there and fight. If I hold back I lose. I’m going in there to put on a show and I think I do that very well.”