No shortcuts - Casey wants to fight the best 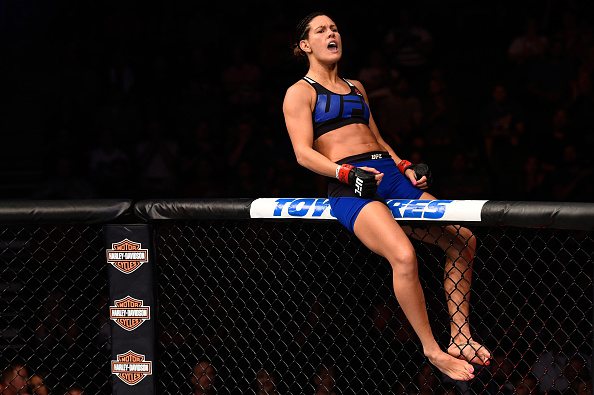 “I worked hard to get where I’m at,” said the UFC strawweight contender, who faces Michelle Waterson this Saturday in Glendale, Arizona. “I didn’t have a golden spoon in my mouth, I didn’t come from a wrestling background or a big jiu-jitsu background and all that stuff. I didn’t grow up in the smaller professional shows or anything like that. I went out there, I did my job, I fought who I needed to fight and I got where I am because of my hard work and my dedication and the type of fighter that I am. I’m willing to take fights no matter what. I’m not asking for easy fights, I’m not asking for tomato cans, I’m not trying to get a padded record and make my way up to a title fight. I think the way to get there is to beat the best, and that’s what I’ve been doing.”

Now in my defense, the reason I brought up luck was to ask the Arizonan whether with this fight kicking off her 2018 campaign, was there a feeling that the bad luck she’s endured throughout her career is a thing of the past.

She laughs, simply calling the bad decisions and a debacle with the Texas Department of Licensing and Regulation last year that almost cost her a win over Jessica Aguilar, “misfortunes.”

But she is optimistic.

“A lot of things are out of my control,” Casey said. “The only thing I can control is my attitude towards it and sometimes things happen and you’ve got to brush it off and keep going. I try to do that the best I can and hopefully one day I won’t have to dust off some stuff (Laughs), and when that time comes, I’ll definitely take it as a blessing.”

Her time may be here. Fighting the No. 7-ranked Waterson is a big deal, especially with it being televised on FOX, and with such a platform, fans will get introduced to the former Division I soccer player for UTEP. That’s great for the 30-year-old, but frankly, it’s been too long of a wait already.
MORE FROM FIGHT NIGHT GLENDALE: Road to the Octagon | On the Rise | Waterson embraces pressure | Vettori has fighting words for Adesanya

Forget the 7-5 record. When Casey fights, she fights. In a lot of ways her style is right in line with what boxer / MMA fighter Heather Hardy said in describing her own style in the boxing ring, that someone took her wallet and she had two minutes to get it back.

“That’s what it is,” Casey said. “I go out there and I want to fight. Our job is to fight. Our job isn’t to have a million followers (on social media). Our job is to go out there and put on a show for the fans. They come watch us fight. They’re not coming to watch us dance around and do anything like that. I want to get in there and I want to throw my hands. If it goes to the ground, I’m gonna work my jiu-jitsu, I’m gonna wrestle as much as I can, and I’m here to fight. That’s it. I don’t get paid to do anything else besides make weight and put on a show.”

If there was a Diaz sister in the UFC, Casey might be it. And as affable and soft-spoken as she is outside the Octagon, inside it, she’s got a good dose of mean. She might not describe it as such, but she will admit that she got her competitive native long before she put on a pair of gloves.

“I think it’s always been instilled in me from a young age,” she said. “I was the baby of the family. My sister’s a big girl, she’s almost six-feet, and she’s big compared to me. She’s an athlete as well, so I always had to compete with her. I was always the smallest on the team and I always played up a year in soccer. And my team would play up a year, so I was technically playing up two years, so I always had to fight for my spot on the team. I trained all the time, and when it came down to game time, I wanted to show people that I may be small but I belong here just as much as anyone else does. And I think that’s just how it was. I was a neighborhood kid, you had to stick up for yourself and you handled things. You didn’t go run and tell mommy and daddy that so and so pushed you or took your bike. You just handled it and that’s just how it was.”

That was life in Tucson and East Mesa, and Casey has no regrets for having an “old school” upbringing where kids didn’t rely on smart phones and video games for entertainment.

“My mom was a single mom for a long time and my dad worked graveyards and stuff, so when we were at his house, he was normally napping, so we were outside all the time,” she said. “We were tomboys and we hung out with all the boys around the neighborhood and apartment complex, and you get into your little fights. And playing football and basketball and soccer and riding bikes, we were just outside kids. It was fun. I think it helped me a lot as an adult and that’s been my mentality on things.”

Yeah, if you aren’t a fan of Cortney Casey yet, you should be. And you probably will be once you see her fight on Saturday.

“I definitely want to make a statement with this fight,” she said. “Michelle Waterson is a big name. Even though she’s coming off two losses, she still has a lot of hype behind her and she deserves it. She’s done well in the division and done well in the atomweight division and she’s a household name, so to go out there and do what I know I can do against her will be huge. It will be a great way to start off the year, so I’m definitely excited about it.