No secret what Garbrandt wants: Lineker 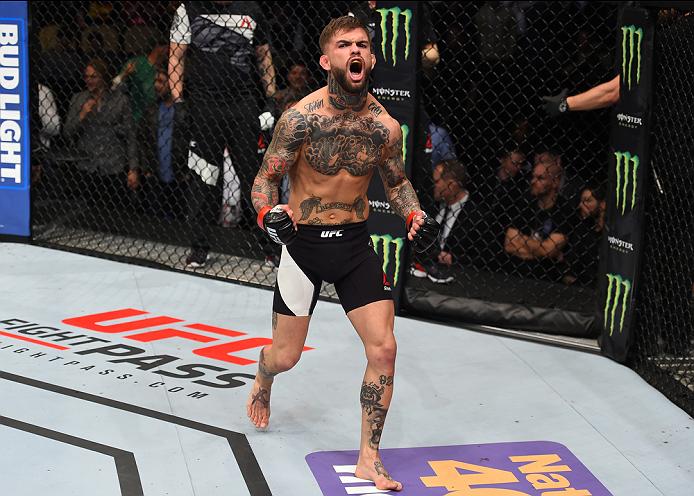 Prior to stepping into the Octagon in Pittsburgh last month, Cody Garbrandt was going a bit stir crazy sitting on the sidelines.

The late February assignment was his first since scoring a unanimous decision win over Henry Briones at UFC 189 in July and the Team Alpha Male member was chomping at the bit to get back into the cage and continue making a name for himself.

Matched up with Brazilian powerhouse John Lineker in a fight that had fans and media drooling at the explosive potential of the bantamweight pairing, the undefeated upstart saw the matchup as his opportunity to make a splash in the steadily improving, increasingly deep 135-pound ranks.

So you can imagine how disappointing it was for Garbrandt to wake up on the first day of fight week and discover that his heavy-handed opponent had to pull out of the fight after contracting Dengue Fever.

“I opened up with a knockout win over (Marcus) Brimage, fought a tough Henry (Briones) – didn’t get the finish, but I dominated the fight – so it was tough being on the shelf and seeing everybody in your division getting this hype built around them while you’re sitting there knowing you’re the real deal, one of the baddest in the division. I’ve got to have lambs to slaughter.

“That’s why I went after the Lineker fight,” continued the 24-year-old known as “No Love” for his merciless, attacking style. “I wanted somebody that was legit. I wanted to show people that he’s not. I wanted to dance around and make him look like a fool. That’s exactly what I was going to do to him and exactly what I am going to do."
RELATED CONTENT: Fighter bio | Watch Garbrandt's UFC debut | Garbrandt's Roots

Lineker may not have made the trip to Pittsburgh last month to face Cody Garbrandt, but as far as the up-and-coming bantamweight contender is concerned, the Brazilian’s withdrawal from their meeting at UFC Fight Night: Cowboy vs. Cowboy was simply a stay of execution.

“I’m trying to get this Lineker fight back and trying to get better as a martial artist. You better believe the hype,” the fired up Garbrandt added after his first-round knockout victory over Lineker’s late notice replacement, Augusto Mendes, in Steel City.

With the UFC fresh off announcing its schedule for April through June at last week’s “Unstoppable” launch event, the Uhrichsville, Ohio native and Sacramento, California-based fighter is targeting a return to action in June, though his preferred opponent has been lobbying for an early date in a very different location than Garbrandt has in mind.

Almost as soon as the dust settled from Garbrandt’s dusting of Mendes in Pittsburgh, Lineker received a clean bill of health from his physician and took to Twitter, asking to reset the matchup as part of UFC 198 on May 14 in Curitiba, Brazil, a stadium show headlined by a heavyweight championship bout between Fabricio Werdum and Stipe Miocic.

While Garbrandt absolutely wants to share the cage with Lineker, he has no interest in heading to Brazil to make that happen and made a compelling case for why “Hands of Stone” should have to face him on neutral ground whenever they do meet.

“Of course he wants me to come to Brazil, but you don’t get no favors,” Garbrandt exclaimed, fired up simply by talking about the matchup. “You pulled out the week of the fight and you’ve missed weight four times? You shouldn’t get any favors.

“He got scared. He was shook. He’s healthy now and he’s ready to fight and he wants me to come to Brazil,” he continued. “But why would I go to Brazil? You come up here and fight me in Vegas or a neutral spot. 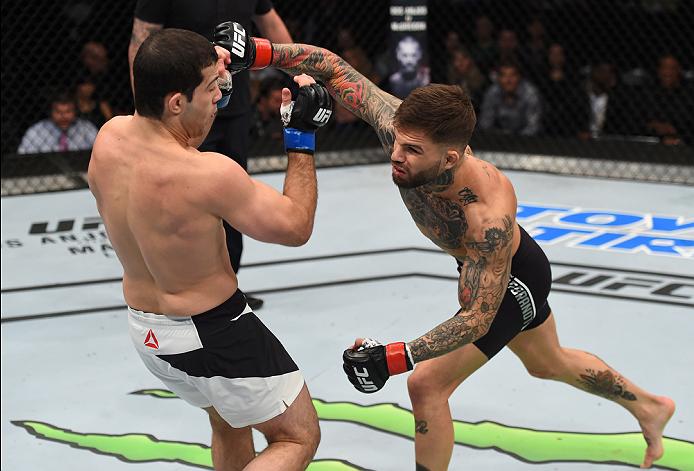 And after Lineker, “No Love” is ready to take on all comers, just he was back in February when he stopped Mendes inside the first round, because while his short-term focus is on securing a fight with the hard-hitting Brazilian, his ultimate goal is bringing UFC gold back to Team Alpha Male.

“Once I find my mark, find my range – I’m just starting to get comfortable in there. With more fights and more training, I’m only getting better and more well-rounded. I get better each fight. I’m not on my couch, checking my Twitter feed; I’m in the gym chasing this opportunity and chasing gold; I’m chasing gold every day.

“I don’t care that I’m not ranked. I’m not coming for a Top 15 spot. I don’t care about a ranking; I’m coming for gold. All that matters to me is bringing the belt home.”