No Rest for Yushin Okami

"My goal is to become the world’s best fighter, not to become the best
Japanese fighter. I am going to make it happen." - Yushin Okami 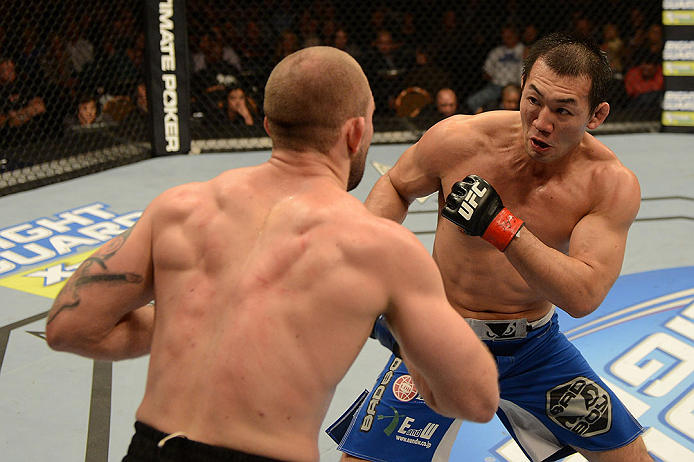 UFC President Dana White has called Yushin Okami the best Japanese fighter to ever compete in the Octagon, and with 12 wins in the promotion to his name, it’s hard to argue with his success in the UFC. But before Okami was fighting top level competition, challenging for world titles and securing a main card spot on Saturday’s UFC on FUEL TV 8 card against Hector Lombard, he was a fan like the rest of us, hoping to one day emulate the exploits of his countrymen.

“Yuki Kondo and Caol Uno were my favorite fighters in those days,” said Okami through translator Gen Isono when asked about his early years in the sport. “I loved how Yuki Kondo fought and how he looked, and I respected and still respect Caol Uno because we were on the same team and I knew how dedicated he was to this sport."

Kondo was one of the most underrated Japanese fighters to step into the Octagon, and though he once challenged Tito Ortiz for the 205-pound title in 2000, his impact was felt most keenly back home, both before and after his three fight stay in the promotion. Uno was the gold standard for fighters from the Land of the Rising Sun in the UFC for years, challenging twice for the lightweight title, losing a decision to Jens Pulver in 2001 and drawing with BJ Penn in 2003.

It was Okami who became the first to put it all together though, with his strength, ability to use the Octagon to his advantage, and fighting savvy serving him well consistently. Only four fighters have issued him a defeat in the UFC, and when those fighters are named Rich Franklin, Anderson Silva, Chael Sonnen, and Tim Boetsch, that’s pretty impressive. But ask him about White’s comment, and while he appreciates it, he has bigger goals in mind.

“I am very glad and honored to hear that, but my goal is to become the world’s best fighter, not to become the best Japanese fighter,” he said. “I am going to make it happen.”

And after his upset loss to Boetsch in the third round of a fight he was winning last February, Okami bounced back with a TKO of Buddy Roberts in August and a decision win over Alan Belcher in their December 2012 rematch, giving him some nice momentum heading into his first start of 2013 against Lombard.

“I feel proud that I have defeated top fighters in my division, and in 2013 I want to convince fans that Yushin Okami has the right to challenge the title again,” said the Kanagawa native, who will have home Octagon advantage against the Cuban powerhouse.

“There is no jet lag and no difficulty for my daily life here,” he said of fighting at home. “In that sense, of course some adjustments are easier here. I admit I had and have some different kinds of pressure because I want to live up to the expectations of my fans in Japan and the people who support me.”

Against Boetsch, he fell short of those expectations thanks to the furious comeback of “The Barbarian.” But in an odd 12 months for the division, one that saw top contenders Boetsch, Belcher, and Michael Bisping lose big fights, Lombard drop his UFC debut, and yet another top contender, Chris Weidman, get sidelined by injury, Okami’s defeat has not hurt his standing as much as it may have in any other year. In fact, with two straight wins already in the bank, a third could skyrocket him back up the 185-pound ranks. Yet “Thunder” admits to not looking at his peers defeats as a way for him to move forward.

“I did not pay attention to those fights in that way,” he said when asked about Bisping’s loss to Vitor Belfort and Boetsch’s defeat at the hands of Costa Philippou. “Of course I was interested in their fights very much and I believe that any fighter should be given an opportunity when he proves he has the right.”

Now it’s time for Okami to prove that he’s worthy of eventually securing a third fight with Silva, and he has to get by Lombard to do it.

“Quick hands and one punch KO power are combined in Hector Lombard,” he said. “That will be the most difficult part for me to handle when I fight him, and I am very careful about that point.”

It’s a good mindset to have, especially since Lombard is coming off a first round blitzing of Rousimar Palhares last December. But Okami hasn’t made it to this point in his career without being able to adapt to different styles, which is just one element of his success thus far. As for the other secrets, he simply says, “I am very grateful to the UFC and the people around me for giving me such huge opportunities, but I do not regard myself as being successful already. My goal is to go one step further.”

And maybe that’s the secret, a humility that keeps him pushing for more, despite already reaching a high level. At 31, he’s still in his physical prime, and in training with other partners, including Team Quest and Chael Sonnen, he’s keeping things fresh at a time when other fighters can get stale. And while the grind of being a professional athlete can be a rough one, leading him to hit his bookshelf for relaxation, he refuses to take off too much time from his day job.

“I believe that relaxing is very important, but I am a professional fighter and training is part of my job, so basically I do not want to be away from martial arts completely.”