No Rest for Vik Grujic

"I’m a fighter, I want to put on a good fight, and I want to win, number one. But I also want to attract lots of fans. I want a lot of people to appreciate what I do because part of what I do is entertain people." - Vik Grujic 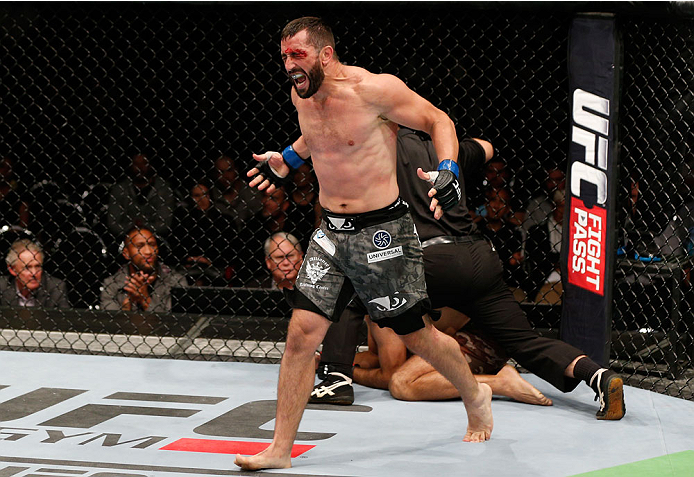 With his back against the wall following a loss in his UFC debut against Nordine Taleb, The Ultimate Fighter Nations’ Vik Grujic knew that he likely had just one more shot to secure a spot on the welterweight roster when he faced his teammate on the show, Chris Indich, in June.

Many falter under that weight; Grujic - a thyroid cancer survivor who had faced more imposing opponents in life - didn’t, rising to the occasion to stop Indich with five seconds left in the opening round. He was a UFC fighter. That doesn’t mean he’s decided to sit back and smell the roses, though. As he approaches his third UFC bout against Canada’s Chris Clements tomorrow night, he still feels as if his shoulders are pinned to a huge slab of concrete, with only one direction for him to go to break loose.

“I don’t think there’s ever gonna be a time when I’ll feel complacent,” Melbourne’s Grujic said. “I’m just gonna go in and do my thing and wing it, and if I come out with the win or not, my perspective is not that my head’s always going to be on the chopping block in terms of being in the UFC as a fighter, but more that I want to entertain. I’m a fighter, I want to put on a good fight, and I want to win, number one. But I also want to attract lots of fans. I want a lot of people to appreciate what I do because part of what I do is entertain people. There’s a lineup of fights throughout the night and I want to be that one guy to stand out amongst all those fighters. There are a lot of guys coming from all parts of the world that put their lives on the line just to get out there and shine for that 15 minutes of their life. So if I can be that one guy to step up and take that limelight, that’s something that I’m really driving for in every fight.”

Each fighter in the UFC takes what he or she does seriously. There’s just no other option. You win, you double your money, and even from a mere survival standpoint, it’s better to be the one doing the hitting than being on the receiving end. So this isn’t something to brush off as just another thing to do on a Friday or Saturday night. But when you talk to Grujic, there’s an added sense of urgency and intensity. Sure, the married father of three is a heck of a nice guy, but there’s no question that when it comes to his job as a fighter, it’s not a joking matter. Maybe it’s being 37 that has given him that sense of urgency. But more likely it’s the idea that as someone who may not have been expected to get this far, now that he’s here, he’s not letting go.

“I know how hard my life’s been, and I haven’t even touched on my upbringing as a kid,” he said. “It was extremely hard, basically growing up without parents around. And there’s been lots of alcohol abuse in my family and things like that that most kids have gone to get therapy for. But these are the things that have made me mentally stronger in life and more determined to succeed. And there was the thyroid cancer and so many other things that continually try to beat me down. But it strengthened me more. So I think that when I look at the way things have gone for myself, I can see why a lot of people tell me they draw a lot of inspiration from my story and how I carry myself. And I’m thankful that people can respect and connect with that. That’s extremely rewarding.”

A 7-4 pro MMA record doesn’t tell the tale of the fights Grujic has won in life. As far as that goes, he’s already a world champion. But in the Octagon, there are still fights to be won, and to get past Clements, Grujic has again enlisted the aid of the Alliance MMA team in California.

“I absolutely love it out here in the U.S.,” Grujic said. “There’s something about it. I’ve always dreamed about coming out here as a kid, and California is one of the places I really wanted to visit. I think where Alliance is located really helps me to take my mind off things and enjoy myself a little bit and not focus on being away from my family so much because that’s one of the things I find extremely difficult and very hard. But on the same token, Alliance is what brings me back here. I’m training with the best to fight in the UFC and better myself every time, which is something I’m able to do.”

On paper, Grujic couldn’t have a better dance partner in Sydney than Clements, a no nonsense striker who loves nothing more than a back-and-forth slugfest. Grujic relishes such a matchup, but as he learned in his debut loss to Nordine Taleb, you can’t always count on fights on paper to be the same in reality.

“Nothing’s ever really sure,” he said, “I was certain Nordine would do the same in our fight. I prepared to stand and trade and I found myself chasing him around the ring, and he pretty much ducked under, took me down and held me down for three rounds. I was extremely disappointed with that fight and I’ve worked tirelessly since then to make sure I can get up and not be taken down again. So whatever Chris is bringing to this fight, nothing is going to surprise me.”

That goes for everything Grujic encounters.  And while it’s been a crazy ride for him over the last 37 years, he’s refusing to let anything negative he’s gone through define him now or ever.

“I want to enjoy life,” he said. “I want to see the good things in life. I want to experience life. You wake up one day, who knows if you’ll be able to wake up the next. I believe that I’m very fortunate to be able to get somewhere in life through my athleticism. In just the last year it’s got me to the UFC and it’s taken me places in the world to do things that I never thought I’d be able to do. I never really had that belief in myself that I could get up and get myself out of the slums where I grew up and the s**t that I’ve gone through in my life to get to where I am today, and you don’t really know, but you gotta try, and that’s the underlying factor. You gotta get up and try and that’s what life’s about. You’re either a winner or a loser.”