No Rest for Cholish Before Homecoming Bout on May 5th

"Obviously, fighting is a risky and dangerous sport, and getting into a cage with another guy takes a lot of guts, but at the end of the day, these people are here to watch a fight." - John Cholish 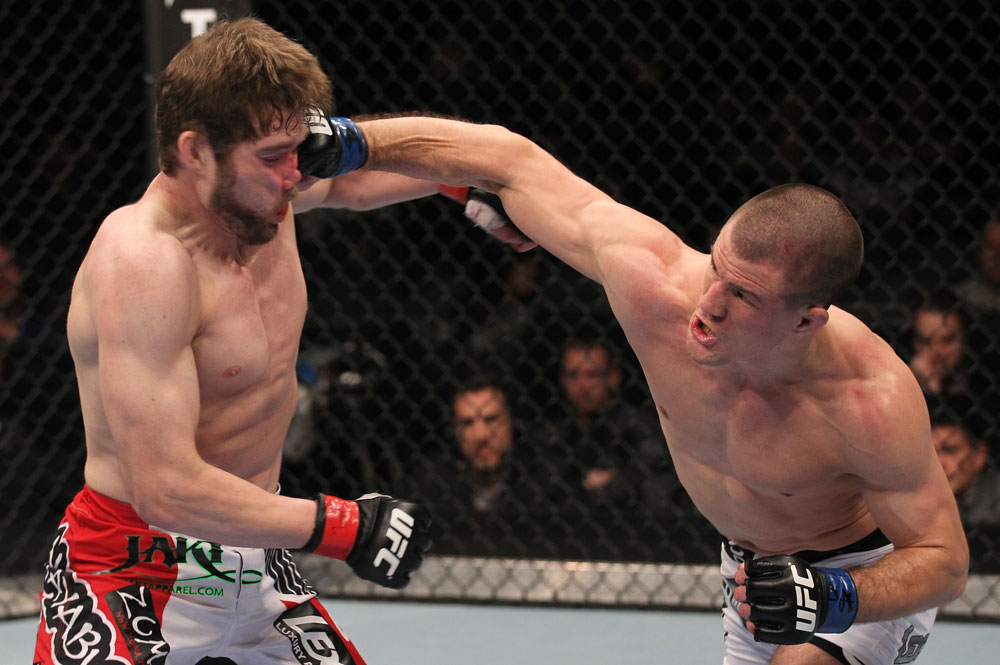 It is said a man can be known by the company he keeps.

This timeless proverb could not be more applicable for both UFC lightweight John Cholish and Brazilian Jiu-Jitsu black belt John Danaher. In the former’s Octagon debut last December, fight fans instantly knew almost all they would ever need to when the latter was introduced as Cholish’s head coach. This immediate recognition or near a priori understanding of Cholish because of Danaher’s presence can similarly be likened to Danaher’s indelible integrity from his work with and subsequent praise from Renzo Gracie, Roger Gracie, Matt Serra, Chris Weidman, Greg Jackson, UFC welterweight champion Georges St-Pierre, and many others.

As Danaher has never been an animal of competition, his legend as a teacher will forever be linked to the overwhelming success of his students, including the 8-1 Cholish.

“John was one of the first guys I met at Renzo Gracie’s Academy in 2006,” tells Cholish. “Georges St-Pierre is such a highly respected fighter and to have a guy like that speak so highly of John speaks for itself. He's a black belt and I think he is one of the best teachers of the overall game of jiu-jitsu and mixed martial arts. One of the things that I think makes him so great is he is still a student of the game. Whether he is working with a white belt on a technique, teaching a class, or drilling with Georges St-Pierre, he's constantly learning and developing and trying to find something new. He's just so open minded and looking for new possibilities and new techniques and new strategies. Not just with jiu-jitsu. He could be studying a new gymnastic move in which he thinks the hip movement will correlate to jiu-jitsu or a judo technique. It's really interesting how he brings the academic side of the sport over to the practical side of the sport. His dedication of how many hours he spends in the gym is above and beyond anyone else I know.”

At 28 years old, the New Jersey native looked completely unaffected by any “jitters” inside the Octagon at UFC 140, which Cholish easily equates to his enigmatic mentor. “John's coached Georges St-Pierre in numerous title fights, so I had pretty much a full mental breakdown of what the week would entail from the Tuesday getting there all the way up until fight time,” says Cholish, who scored a systematic second round TKO over Mitch Clarke. “He did a great job just reassuring me about everything I was going to walk through, so I wasn't at all surprised or nervous or anything. As far as it being the first fight of the night, the best part is you’re the only one who is on time because you know exactly when you're going to start. It was just like another day training, except this time it was in the Octagon.”

The finish of Clarke improves Cholish to an eight fight win streak with the past seven by stoppage. The sole loss on the former division I wrestler from Cornell University’s record was in his first MMA fight, which Cholish took on a lark after training a year of BJJ at Renzo Gracie’s Academy in Manhattan. Although that 2007 defeat on a baseball diamond in Fort Myers, Florida is technically a blemish on his professional record, it was the watershed moment for Cholish, as he fell in love with the sport while grinning through every punch he ate. Afterward, Cholish dedicated himself to learning each aspect of this new combat passion and has gone undefeated ever since, but Cholish is far from content at his current level of expertise.

“John and my father tend to harp on me about me being my toughest critic,” reveals Cholish. “Before I even get back into the locker room, I'm talking to John like I did this wrong and this and that. I always try to pick myself apart and I sometimes get in trouble over-analyzing myself. At the end of the day, you have to say, 'did you get the result that you wanted?' And I did. I set a decent pace, I was able to kind of dictate where the fight went, and in the second round I picked it up. I felt like I was landing consistently on the feet and starting to get my rhythm. When we had that little flurry, I was able to secure a good transition and get to the back and finish the fight. You always have to get better from fight to fight because your opponents are going to be doing the same thing. Overall from my first fight in the UFC, I was definitely satisfied with the performance, but I'm definitely looking to improve upon it.”

At UFC on FOX 3 in his home state, Cholish will get that desired step-up in competition with Danny “Last Call” Castillo. “He's got a real reputable name and fights out of a great camp,” admits Cholish of his 13-4 opponent, who is a member of Urijah Faber’s Team Alpha Male in Sacramento, California. “I am excited about it. He has a great record fighting in the WEC and the UFC, so he's a great challenge for me. I'm definitely looking forward to the opportunity of testing my skills and abilities against him.”

Besides the given that Castillo is a tough well-rounded fighter, which is noted by his wins over Dustin Poirier, Joe Stevenson, and, recently, Anthony Njokuani, Cholish likes to unconcern himself with his adversary and leave the tape watching to his coaches. “My main belief, I really enjoy training and I train so much, and when I'm just training for the love of it and having fun I improve a lot better as opposed to training with subtleties in the back of my mind of what my opponent does, because I'll focus on those areas a little more,” explains Cholish, who benefited greatly from this practice in his Strikeforce win over Marc Stevens as Stevens, a righty, started their bout as a southpaw. “When you rely on what you see, you go in practicing that and studying for your whole fight camp, and you are going to be in a little bit of a deficit if you go out there and all of a sudden your opponent does something different. I try to be as good as I can in all the areas of the game, so no matter where the fight goes, I hopefully can dictate the pace or dictate where it goes.”

In preparation for his second UFC outing, Cholish is busy criss-crossing New York City’s first borough to train all the As in MMA. Outside of his work with the academic armbarrer from New Zealand in Danaher, Cholish’s other two cornermen are his standup coach Joseph Samperi and BJJ black belt Erik Owings, the owner and operator of Mushin MMA in Union Square. Cholish can also be found at Church Street Boxing, doing gymnastics at Chelsea Piers, and learning the “Jantzen Ride” from friend and former NCAA Division I national wrestling champion from Harvard University Jesse Jantzen. As Cholish sharpens his weapons all over the Big Apple, they are all used accordingly by Danaher’s guidance.

“When working with him, I put 100% all the trust in him, his abilities, his words, and what he does,” affirms Cholish. “I have the confidence that when he tells me to do something, whether it sounds like it makes sense to me or not, I can 100% fully put my confidence into what he says. I can believe if I do what he says I will get a positive result. He's not out there with a huge camp, so I do feel very honored he takes the time to spend time with me and work with me. I definitely owe a lot of my successes to him.”

If being a rising prospect in the shark infested waters of the UFC’s lightweight division wasn’t enough to spend his days on, Cholish maintains a full-time job as a Commodities Broker for an OTC Energy Brokerage Firm where he primarily focuses on brokering Natural Gas and Crude Oil options, futures, and swaps. Essentially what that means is that when Danaher references Pareto’s Principle of economics in a grappling seminar, Cholish gets it. It also means that a couple of the suites at the Izod Center in East Rutherford, New Jersey will be rocking with Cholish’s white collar co-workers.

“They're nothing but supportive at work,” states Cholish. “Of course, I need to not let my work slack, and my work comes first and I need to make sure everything goes well in the office. As far as the fighting goes, they love the sport and they're big fans of the UFC. Having that support and having that camaraderie in the office is definitely nice to have on my side. In all honesty, it's nice fighting in New Jersey because I won't have to take off as much time for work. When I have a fight, that's actually my vacation time. Most people wouldn't call that a vacation. It's nice that it's close by and I'll definitely have a lot of family and friends there to support me, which is definitely a plus. Being able to sleep in my own bed and train at my own facilities is obviously going to be a big benefit.”

On May 5th, Cholish’s mix of brains and brawn will collide with the California contender, Castillo. “I want to put on a strong performance and use everything I've learned in training and get a strong finish that's in a technically sound way and is hopefully aesthetically pleasing too,” asserts Cholish, which in laymen’s terms translates to another choke or knockout finish for a biased and bellowing Jersey crowd. “Obviously, fighting is a risky and dangerous sport, and getting into a cage with another guy takes a lot of guts, but at the end of the day, these people are here to watch a fight. That's what I plan on doing. I'm bringing a lot of fast paced action, using skill and technique to show how beautiful mixed martial arts can be.”

Describing a stoppage win over Castillo as a pursuit of beauty, Cholish sounds exactly like the company Danaher would keep.