No Rest for Cathal Pendred 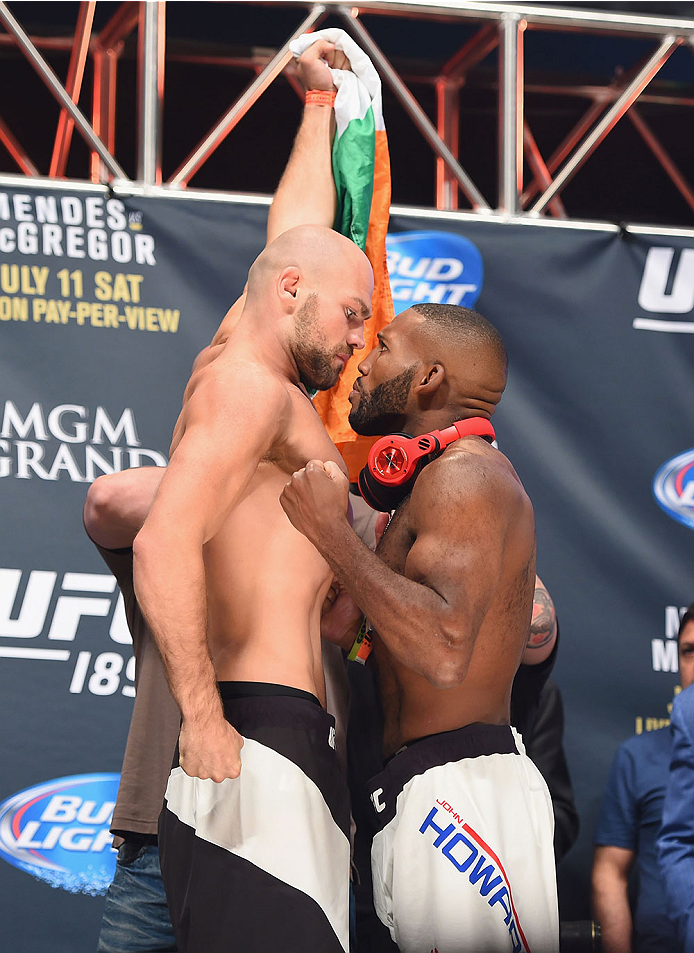 Before his June 13 bout with Augusto Montano, Cathal Pendred did expect to be on vacation right about now, maybe even in Las Vegas to cheer on his teammates Conor McGregor and Gunnar Nelson as they fought on Saturday’s UFC 189 card. But after leaving the three-round win over Montano unscathed, the Dubliner wanted nothing more than to fight again.

“First and foremost, I was in great shape from being down in Mexico for six weeks, training at altitude, and second of all, the fight itself in Mexico was a bit frustrating,” Pendred explains. “My opponent just didn’t seem to want to be there, and I didn’t take any damage whatsoever in the fight. I was hit maybe once or twice in the whole fight, so all those factors made me realize that I may as well try and get a fight. There were also a lot of welterweight fights in a short space of time and I just knew I would be able to get a fight somewhere.”

Somewhere, anywhere, Pendred didn’t care, and he lit up social media looking for a fight. He was so persistent that you got the notion that if there was an opening in a heavyweight fight, he would have offered his services.

“The UFC was probably looking at putting a restraining order on me because I was harassing them for a fight,” he laughs. Pendred thought a June 27 bout with Rick Story was promising when Erick Silva fell out of their fight due to visa issues, but instead, the 27-year-old got the call when John Hathaway was forced out of his UFC 189 bout with Nelson. In with Nelson went Brandon Thatch, and Thatch’s original foe, Boston banger John Howard, got Pendred.

All in a day’s work.

“This was the best case scenario I suppose, because my whole team is here,” Pendred said. “We’ve got a house, we’ve got a gym organized in Vegas, and everything is looked after.”

On Saturday night, Las Vegas will seem like Dublin, as the Irish pack the MGM Grand Garden Arena to cheer on their lads.

“I would suspect that nearly half the arena will be Irish, so I’m expecting the MGM to be overtaken by the Irish on the 11th of July,” he said. “The Irish Invasion of the UFC is not just describing the fighters taking over the show, but the fans as well, so it’s definitely going to feel like back home.”

And with the training situation a perfect one for a short notice fight and the crowd on the side of Pendred and his SBG Ireland teammates, all that’s left is what happens in the Octagon, and he hopes it’s not a repeat of what went on in Mexico City.

“It was the last thing I was expecting,” he said of his three-round unanimous decision win, one in which Montano was uncharacteristically passive throughout. “I was in a little bit of shock when it was happening because it was the furthest from what I thought I was gonna come up against. I had seen all of Montano’s fights, he’s a super aggressive fighter, comes straight out, and you could see that on his record. This is not a guy that messes around; he comes forward and is looking to fight. So that’s the last thing I was expecting. On top of that, he was in front of his home fans. Mexican people are very proud people and Mexican fighters are very proud and passionate and I was expecting the emotions to make him more aggressive, but it didn’t happen whatsoever. I just tried to adapt to the situation, but it was frustrating because it was like he wasn’t trying to do anything.”

Pendred did get the win, his fourth straight without a loss in the UFC, and that’s the most important part of the whole equation. But after spending over a month in Mexico to get ready for the bout, he’s not so sure that he got what he was looking for.

“I wanted to go out there and put a performance on,” he said. “I invested a lot of time and money into going to Mexico. I was the first fighter from that card to get out to Mexico, I was there six weeks, I did a lot of prep for it and the reason being that I wanted to put on a performance and make a statement.”

There is Saturday night though, and the likelihood that Muay Thai striker Howard won’t put on the same performance Montano did with the world watching. Don’t tell Pendred that though, as he has learned that not everything is what it seems in mixed martial arts.

“One thing I always seem to learn in my fights, and I can’t learn it enough, is to expect the unexpected,” he said. “It’s one of the reasons I don’t put too much weight on footage of the fighters I’m facing because you never know what you can expect. I just focus on what I’m going to do, and you have to adjust and adapt in the moment when things get very strange like they did in the last fight. I’m not expecting Howard to pull off a Montano in the next fight, but I wasn’t expecting Montano to do that in the last fight. So I don’t know what’s going to happen on the 11th of July. I just know I have to be ready to fight, and I’m going to be ready to throw down.”

As for that vacation, he’s made it clear to his girlfriend that it’s coming after this fight.

“She’s very understanding and accommodating, so I promised her that there is a vacation on the horizon,” Pendred laughs. “It will be an even better vacation after I get two wins in succession in a short space of time. So it will be worth it.”