No Peace - Smith KOs Duke in One 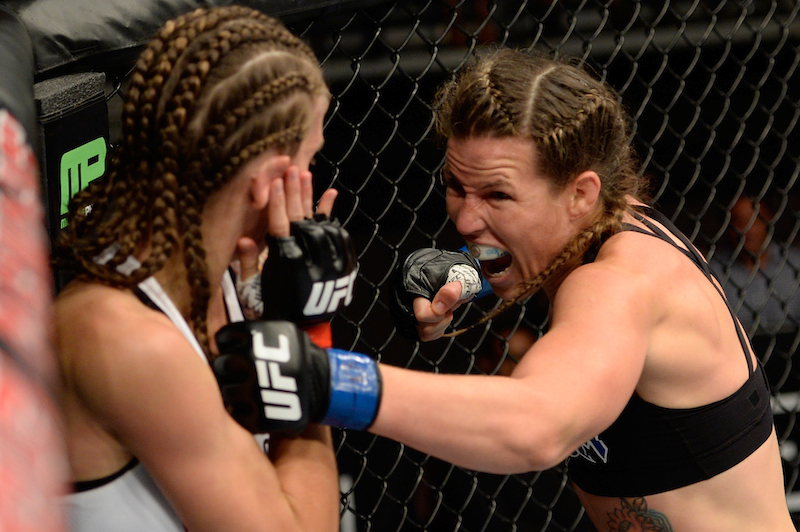 ATLANTIC CITY, NJ, July 16 - Bantamweight veteran Leslie Smith wasn’t much of a “Peacemaker” against The Ultimate Fighter 18 alum Jessamyn Duke Wednesday night, as she stopped her opponent in the first round of their UFC Fight Night prelim bout at Revel Casino Hotel to nab her first Octagon victory.

“This is epic,” said an ecstatic Smith. “This is one if the biggest wins of my entire career and I'm going to remember it and take it with me. I'm really glad that I was able to live up to the training and the expertise that my coaches have shared with me. They all have done so much and been such good examples. It was great to be able to honor them with a win.”

Duke looked to be in control of the bout in the early stages, as she used her significant height and reach advantages to keep Smith at the end of her jab. But as soon as Smith was able to cut the Octagon off and put Duke against the fence, she unleashed a torrent of strikes. Duke took the first few shots well, but after a couple body shots, the Kentucky native slumped to the canvas, with referee Vitor Ribeiro stopping the fight at 2:24 of the round.

“The fight was going well with a good pace,” said Duke. “I knew she was going to come out strong. I threw a left hook and felt a pain in my left hand. To her credit, she sensed something was wrong and took advantage of it and got the win.” 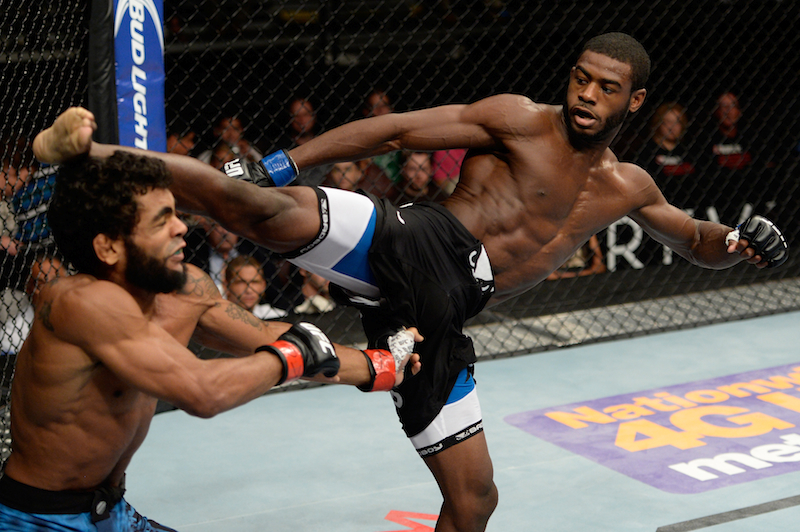 The bantamweights set a fast pace from the start, Viana having some solid success in the stand-up game as Sterling did equally well in the grappling realm while also getting his share of strikes in.

It was in the second that Sterling started taking over, as Viana had few answers for his stellar ground game, and things just got worse from there for “Wolverine,” who made a quick visit to the mat again early in round three. Patiently, New York’s Sterling looked for his time to strikes, and with under two minutes remaining in the fight, he found it, letting loose with a series of strikes that caught Viana by surprise and soon prompted referee Liam Kerrigan to step in and halt the fight at the 3:50 mark.

Despite a stellar effort, Pat Healy remained winless in his sixth trip to the UFC Octagon, as he dropped a three-round unanimous decision to fellow lightweight veteran Gleison Tibau.

Tibau was sharp from the opening horn, stunning Healy briefly with a few flush shots while the two stood, and then going on to dominate the action on the mat, starting with a thudding slam and some equally hard ground strikes. With less than a minute left, Healy got to his feet, but his faster opponent kept him from getting any significant offense off.

Healy, always known for being resilient, kept the pressure on Tibau in round two, and after some rough early moments, he appeared to get himself back in the fight as he chased his tiring foe around the Octagon.

In the third, Healy continued to push the action on the feet, outworking the Brazilian, but a slam by Tibau with a little over a minute left set the stage for a late rally that secured his well-deserved victory. 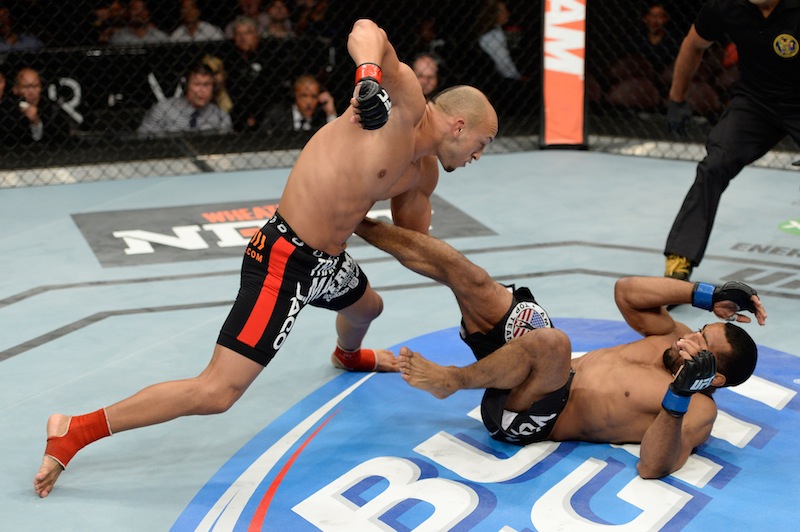 Lightweight Yosdenis Cedeno had a strong first round against newcomer Jerrod Sanders, and it was enough to land the TKO victory, as an injured knee suffered by Sanders in that round left him unable to come out for the second.

After a tentative opening as the fighters got acclimated to the fight, Cedeno (10-3) caught a Sanders kick and drilled him with a right hand, dropping him to the mat. Sanders was able to weather the follow-up storm, and in response he had the fight where he wanted it on the mat, but it was Cedeno who remained in control from the top position, where he landed several hard strikes throughout the rest of the round.

At the end of the frame though, Sanders (14-2) was slow to get up as he limped on an injured knee that forced him out of the bout before the start of round two.

The fight went as expected in the first round, with Gadelha controlling matters at range, in the clinch, and on the mat. Yet despite finding herself in serious trouble on a couple occasions, Lahdemaki showed plenty of heart and made it out of the first five minutes, giving her a chance to put Gadelha in some deeper waters in round two.

The Finland native wasn’t able to take full advantage in the second, as Gadelha controlled much of the frame, but Lahdemaki did get on the board late, tagging her foe with some significant shots while the two stood.

Gadelha fought past fatigue and finished strong through, controlling the final round on the mat to keep her unbeaten record intact and start a new chapter in women’s MMA history.