"This is another chance to prove that I'm one of the best fighters on the planet." - Mark Hunt 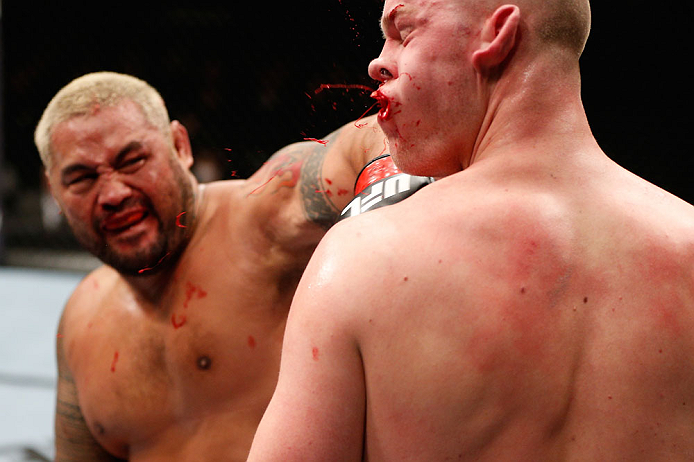 In 2011, heavyweight Mark Hunt told UFC.com if he didn’t win his next fight he’d be looking for a new organization or a new line of work. If he beats Junior dos Santos in their fight this Saturday at UFC 160, he could be in line for a title shot. And while he doesn’t gush about his own achievements, he admits he’s proud of how far he’s come.

“I am pretty proud of it, going from where I was to where I am today, so it's great.”

“Everyone thinks they can knock me out, but anyone can be knocked out. If he gets you in the right spot you're gonna get knocked out.  Vice versa, the same goes for him.  If he thinks he's gonna have an easy road, he's wrong.  We'll see who gets knocked out on the night.”

Hunt won’t be surprised if Brazilian Jiu-Jitsu black belt dos Santos tries to take him down after getting a taste of the standup.

“That's what happens with everybody (they try to take me down). I can stand and bang all day, it's just a matter of timing, when I get them. We'll see what happens on the 25th.  We'll see who's doing what.”

Hunt’s last fight ended with a brutal third round TKO victory over Stefan Struve, after a massive left hook broke the Dutchman’s jaw.  Despite Hunt’s emphatic finish, Struve had some strong moments in what was a back and forth battle.

“It had been a year that I hadn't fought.  I wasn't all there. He was a tall guy, it was hard to get the timing, I got beat up a bit, but in the end, I got there and that's all I really needed, the victory.”

While Hunt has fallen prey to submissions in the past, he’s also demonstrated an impressive resilience in some bad positions on the ground.  He found himself under the 7 foot tall contender’s mount several times, but didn’t feel in any danger.

Hunt was recently awarded a purple belt in Brazilian Jiu-Jitsu under black belt Steve Oliver.  MMA coach and fighter Oliver has long been a fixture in Hunt’s career, and it’s a relationship the “Super Samoan” is grateful for.  For Hunt, people like Oliver haven’t been easy to find in the fight game.

“It's always good to have a friend that helps like you like Steve. It's been a long journey for us from way down to where we are now.  It's good to have someone on board who helps you wholeheartedly, not just for their own reasons, so I've been blessed to have Steve a part of my life as a fighter. Onwards and upwards.”

Hunt says he has seen his share of cheats throughout his long career.

“Management’s always been an issue for me as a fighter. I've been through 4 or 5 of them, and it's always been a bad run with management. Management just doesn't help you these days; they're just into cheating people and running their own little scams.  Sometimes you can catch them before they do something stupid or take you for a ride, but sometimes you just don't get there.”

Hunt has been sparring with a team assembled by Oliver to prepare for dos Santos, in addition to doing strongman-type training for his conditioning.

“(I have) A few training partners, I had a group of guys that I've been working with in New Zealand, some young guys, some old guys. Like I said it's good to have Steve Oliver's team to help me.”

Hunt has been an elite fighter for over a decade, so when asked if he finds himself training a little harder with a title shot so close, he replies no.

“I've been fighting at the top level for 15 years; there's not much different from then to now.  There's just more people watching.  I've been working hard on everything so I'm prepared. Prepared for battle.”

The “Super Samoan” is buoyed by support from fans in his birthplace of New Zealand and adopted home of Australia. He’s won a world title in kickboxing as an underdog from Oceania, and now he’s trying to do it in MMA.