No Nonsense Story Hopes for War with Alves

"I don't shy away from anything or anyone. I like always pushing forward and meeting in the middle and butting heads.” - Rick Story 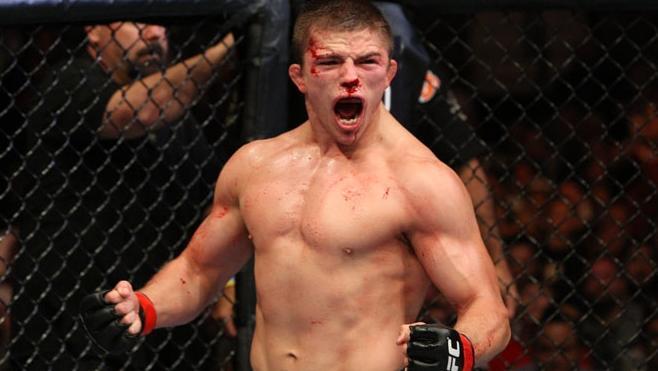 Nothing is more dangerous than a man with a plan who has the means to accomplish it. That man is UFC welterweight Rick “The Horror” Story. That plan is becoming the undisputed 170 pound champion. The means is winning every which way he can, as Story is riding a five fight win streak that features a TKO, a “Submission of the Night” and a few hard fought decisions. The next step on Story’s path towards a title shot is defeating a top 10 opponent: Thiago Alves.

“I'm making a name for myself. I'm taking the steps in the right direction by winning five straight. Simply, I hate losing and I like winning. Fighting in this organization is everything for me. It is everything that I've been working for. I set a goal for myself to be a world champion and I'm doing what I need to do to get there. I'm a goal oriented person. I made a list of things I need to do to accomplish that goal. Alves is on that list and in my way.”

On May 28th at UFC 130 in Las Vegas, Nevada, Story and the “Pitbull” will do battle in the Octagon to get that much closer to a fight for the gold belt. For Story, defeating a famous former number one contender would do wonders for his burgeoning career. Meanwhile, if Alves wants a second title shot he needs to build off his decision victory over John Howard at UFC 124, which was his first win in two years, by beating this surging newcomer.

This matchup of two big, aggressive welterweights who like to control the center of the cage appears to be Heaven sent, but it was one specifically asked for by Story. “My coach and myself were just talking about who would be a good fight for me and he brought up Thiago Alves,” states the 26 year old without any hint of sarcasm about an opponent often referred to as the “Muay Thai wrecking machine”. “I was like ‘okay, that sounds good, let's go for it’ and we just asked for him. There was no second guessing about it or any hesitation. I'll train my ass off for it and train with the same camp that helped me win in the past, so let's keep it going.”

The Southern Oregon University graduate stands a mighty 5-10, is chiseled out of granite and is a wrestling powerhouse with a 12-3 record. But, the scariest part of “The Horror” is him being genuinely excited that the UFC accepted his proposal to fight such a revered knockout artist. “I thought it was awesome. I was like ‘shoot, we can just call guys out like that and get it?’ I thought it was pretty cool.”

One answer to why Alves was called out, Story says, “he's got a big name and he's ranked top 10 in the world.” But the follow-up answer of Story’s is more telling about his confidence in this fight, “stylistically we thought it would be a perfect matchup for me.” It’s the cage-fighting classic confrontation of opposing styles: the standup versus the ground. “He's a kickboxer and I'm a wrestler. Let's be realistic, he has, against top wrestlers, faded in later rounds and he's done it a few times and that was something we wanted to go after.”

Story’s gameplan in this fight is the same as with all his fights: pressure. As soon as the cage door shuts, he will come across the cage like a freight train, making Alves work. Whether it is defending takedowns, getting back to standing, jockeying for position in the clinch or turning this into a brawl, “The Horror” wants to push the pace just like a certain two-time winner over Alves has. “The proof is in his fights against Jon Fitch. A top wrestler with really good Jiu-Jitsu as well and a better gas tank. I don't think there is anything more to say.”

Taking the fight to his opponent and keeping it there has been a trademark for Story in the Octagon. His five fight win streak started with an impressive “Submission of the Night” arm triangle choke on Brian Foster at UFC 103 that was also awarded “Fight of the Night”. In 2010, he fought and won four fights, beginning with a pair of split decisions over Jesse Lennox and Nick Osipczak. At UFC 117, Story hit submission specialist Dustin Hazelett with punishing body blows for a second round TKO. Most recently, he ground out a unanimous decision over Johny Hendricks, making Story the first man to beat the collegiate wrestling superstar.

As for Alves in the cage, the critics have been raving that the “Pitbull” is back because of his dominant standup duel victory over Howard in December. “It was by far the best he looked in a while, but anyone can stand around and throw a few punches and kicks and stuff and not get tired,” asserts Story, declaring that the Howard fight is not a good representation of what Alves will be in for at UFC 130. “The pace wasn't pushed on Alves. Howard kind of let Alves pick his game. I just think with someone constantly in his face, it's going to be a different story.”

Story is preparing for this fight where he always has: Team Brave Legion in Vancouver, Washington. “The training each day is regimented to a way where it is very intense and I focus on whatever I need to do for my game plan,” Story explains of this practical approach from his coaches Pat White, Ray Armstrong and Patrick Briceno. “Also, I'm constantly reminded of what the repercussions would be if I don't show up and fight well. It's motivation, hard training, and hard work - that’s what we're all about.”

Another source of motivation for Story, the pseudo trash talking by the “Pitbull”. In several interviews, Alves has stated he is looking to make quick work of Story - submission or knockout - and stay injury free, so he will be eligible to fight at UFC 134, which is in Alves’ native Brazil. What does Story think of Alves underestimating him? “Let him. He's going to be in for a rude awakening. He better hope he knocks me out quick because, if not, he's going to be in a war that he wasn't at all expecting.”

At UFC 130, two bruising welterweights are going to lock horns to decide the layout of their weight class. For years, Alves’ powerful striking held opponents at bay and kept him high on the divisional ladder. Now, a young challenger with a brutal wrestling style wants nothing more than to match brawn with brawn in the center of the Octagon.

“Everyone I go against always comments on my strength. I think my power to weight ratio is very good. I've wrestled really big yoked guys before and manhandled them. The size doesn't do anything to me, I couldn't care less. I don't shy away from anything or anyone. I like always pushing forward and meeting in the middle and butting heads.”

If all goes according to his plan, “The Horror” will come out on top and be one step closer to his goal: a championship. “You're not anything until you're a champion and if you're not a champion then no one is going to remember you.” And no fighter would be more deserving of a title shot than one with the name ‘Thiago Alves’ crossed off their list.