No Nonsense Griggs Ready to Put The Pressure on Browne

"I think if you put enough pressure on someone their gameplan changes." - Chad Griggs 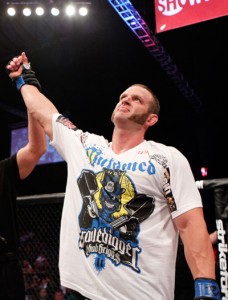 The old adage “the best defense is a good offense” has been adapted to everything from military combat to board games, and has shown to be both entertaining and effective in mixed martial arts.

The famous saying can specifically be applied to the UFC’s new Strikeforce acquisition Chad “The Grave Digger” Griggs and his patented “sprint and swing” fighting style. If you haven’t seen these mutton chops in action, a transcript for almost all of Griggs’ 12 fights goes as follows: he charges at his unfortunate opponent and throws heavy, head-hunting, haymakers until the fight’s finished. It’s a strategy that was instilled in Griggs from the very beginning, earning him an impressive 11-1 pro MMA record, a UFC contract, and a date in the Octagon with rising heavyweight Travis Browne at UFC 145.

“It’s where my success comes from, but it has always been my style and it has always been my survival technique too,” reveals Griggs. “My main coach and first sparring partner was Don Frye. He's coming in from the opening bell and trying to knock your head off. If you stand back and let him do it then he's going to. From the opening bell, we're swinging for the fences to take each other out. I guess it all started from survival because the guy across the ring was coming at me and trying to hurt me and I'm coming at him before he can hurt me. So far, it's worked.”

At 33 years old, the native of Tucson, Arizona is understating the waves he’s already created in the heavyweight division a little. Besides not having lost since his only defeat in 2007, he went 3-0 in Strikeforce, with his best performances coming in his last two fights against Gian Villante and Valentijn Overeem. Both of these 2011 bouts ended in a remarkably similar fashion: Griggs dropping thunderous fists until the ref pulled him off only minutes into the first round. The Overeem win is one of two oddities on Griggs’ record where the victory is recorded as a submission, but the slick BJJ sub of note was “punches”.

“I won't lie, I have found what works for me,” tells Griggs. “A lot of guys I have fought are better fighters, they've got better techniques, their submissions are better or their standup is better. But I think if you put enough pressure on someone their gameplan changes. A jiu-jitsu guy who has tons of submissions, if you start punching him in the head real hard he starts changing his gameplan. Same with standup; if you take them down and start pounding on them then their gameplan changes. I put pressure on them and make them play my game. When they are in control, I stay out of trouble, make them work, get them tired, and try and outlast them. If they're beating me at something then I make them work, try and outlast them, and wait for them to get tired then thump them. I obviously have weaknesses and I'm sure they're trying to find them and capitalize on them, but I'm trying to keep them from doing that by keeping the pressure on them and fighting them when I want to fight, which is right now.”

The first UFC heavyweight set to tangle with Griggs is the undefeated Browne. At 29 years old and sporting a 12-0-1 pro record, Browne took the UFC by storm in June of 2010 by stamping out a first round TKO over Ultimate Fighter season 10 alum James McSweeney in his Octagon debut. In three fights since, Browne has gone 2-0-1 with the overwhelming highlight being his Superman punch knockout of Stefan Struve at UFC 130. The short story on Browne is he’s big, athletic, explosive, and he loves to strike with 9 of his 12 wins coming by KO/TKO.

As a welcome party to the Octagon, Browne is a tough and interesting test for Griggs. He is 6’7” with an 80 inch reach and a swimmer’s build to Griggs’ 6’1”, 73 inch reach, and a muscular frame like he hammers in railroad spikes. Although no one has defeated the Hawaiian so far, Browne’s fights show a split-personality between either an exciting first round drubbing or a long, clinch-athon, drawn out decision where “Hapa” is visibly frustrated and fatigued. It’s obvious that Griggs will come forward looking to hurt his foe and make him uncomfortable, but the real question is how Browne will react.

“I do think that I'm going to have more strength, more core strength than him,” states Griggs. “I'm going to be shorter. I think that's going to benefit me inside the pocket. I think when it comes time for me to muscle him around, I think I will be able to. As long as I stay inside the pocket, keep him from getting that clinch - which I have a strong feeling he's going to try and get that Muay Thai clinch when I'm coming in - work my angles, and use my power to take him down if I want to, then I think I'll be good. I'm giving all my secrets away, but hey, it's a fight. He can know whatever he wants.”

As far as preparation for the bout with Browne, Griggs has been nomadic with his training by traveling between Tucson and Las Vegas, Nevada. In his hometown, Griggs splits his time battling guys like Shane Johnson and Lyle Steffens while maintaining a full-time job as a firefighter/paramedic for the Tucson Fire Department. In Las Vegas, Griggs has been working with none other than former UFC heavyweight champion Frank Mir. The gambler’s bet is probably this fight being determined on the feet, but if the fight hits the floor, Griggs will be ready. Either way, he guarantees entertainment.

“I would like to think with each fight I've grown a little bit and picked up new techniques,” says Griggs. “There's a lot of stuff in my toolbox that I haven't used yet. I think he's going to want to stand up and bang, that seems to be his thing, but if he wants to go to the ground, that's okay, we've been working a lot of the ground. I've been working with Frank up in Vegas and I have some good guys down here and if it comes to that, then so be it. Our feeling is he is going to try and use his reach - long arms, long legs. If he can keep me out and peck away at me then I'll be in trouble. I'm going to have to get inside that pocket and try to hurt him there and stay in there. I think it's a good matchup. I think the fans are going to get a good show. I don't think there's going to be anything lackluster in this fight. I think the biggest thing the fans are going to get out of this is that I'm there to fight. I do put some risk on the line to make it a show, make it exciting, and to make my opponent fight.”

At UFC 145, two titanic heavyweights will clash inside the Octagon, with Griggs debuting his ‘hit first and ask questions later’ offensive style much to the delight of the UFC faithful. “I will predict that someone is going to be hurt - there will be blood,” he said. “I highly doubt it will last more than two rounds and I'll be surprised if it does. I'm looking forward to it and the fans should be too. If they're not then they're going to see this one and look forward to the next ‘Grave Digger’ fight.”