No name change - Wood fine with being "The Prospect" for now 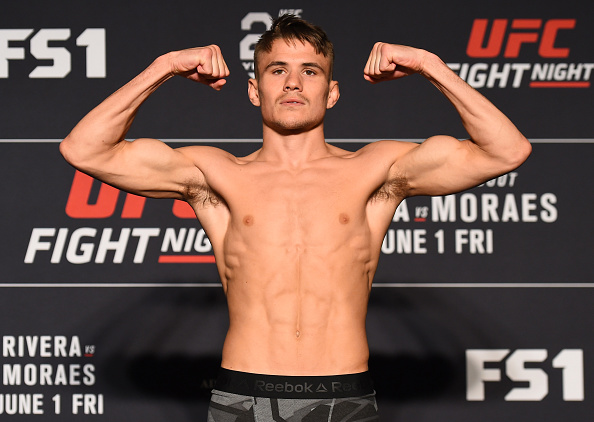 Nathaniel Wood of England poses on the scale during the UFC weigh-in at the DoubleTree Hotel on May 31, 2018 in Utica, New York. (Photo by Josh Hedges/Zuffa LLC/Zuffa LLC via Getty Images)" align="center" />
With a 13-3 pro MMA record that includes a five-fight winning streak (all by knockout or submission), Octagon newcomer Nathaniel Wood has earned his nickname, “The Prospect.” But what happens if and when he soars up to the top of the bantamweight division? Will a nickname change be in order?

“That’s the debate I’m having at the moment with my coaches,” he laughed. “What they said is that once you get that belt, then you go for pound-for-pound number one. So I think until I hit that spot, I think for now I’m gonna stay with ‘The Prospect.’”

Sounds like a plan, and even now, if you’re walking around with a moniker like that, people will be expecting big things. That’s fine with Wood, because he has high expectations of his own.

He’s got a tough test the first time out on Friday, as he battles Brazilian veteran Johnny Eduardo. That’s no shocker for Wood, but he was “a little bit surprised” that the UFC has him fighting in Utica and not in his native England last weekend.

Coached by UFC vet Brad Pickett, the two have developed quite a bond over the last few years, and you can tell that Wood is fighting as much for “One Punch” as he is for himself.

“I can’t even put into words how important it is to have Brad there,” Wood said. “The guy has been there from the start. I’ve only actually known Brad personally for about four years now, but I feel like I’ve known the guy all my life. The guy has passed on so much knowledge to me, and not just in fighting, but through wisdom and life experience. So for me to go out there now and take Brad with me and start sharing that experience, it means the world. I know it’s important for Brad, and with him retiring, I’m keeping him in that game too. He’s a very competitive person, so from being an athlete himself, he’s now very competitive with me, so he’s making sure I’m getting the right training in because he wants me to win just as much as I do.”

The 25-year-old Londoner turned pro in 2012, but it’s been in the last couple years that he’s really made his move, with his last four wins ending by knockout in the Cage Warriors promotion. And with that streak, it was clear that he was ready for the next step in his career.

“I think that’s how I felt for the last four fights,” he said. “I felt like these guys aren’t on my level and it’s nothing to do with Cage Warriors. They’re bringing in guys from all over the world for me. But I know that the UFC is the place where I need to be now to get people that are gonna give me a challenge. My last three fights were all first-round KOs, so I know that the UFC is that place I need to be to perform at my best now and show that I should be in there with the top guys in the world.”

And as a forward-thinking young man, Wood has already been analyzing his new peers on the UFC’s 135-pound roster, and he believes that he can take on any of them.

“If I’m honest, I’ve been doing it for the last year or so, looking at them and planning and plotting,” he said. “I’m looking at the top 15, and there’s no one in there that I think I can’t beat. They can put me in there tomorrow with (champion TJ) Dillashaw, and if I got that opportunity, I would grab that with both hands. I’m confident that I can go in there and give them guys a run for their money.”

“I believe it’s a new wave now,” Wood said. “We’ve got new guys up and coming, and I honestly think that we’re gonna start making waves. When I look at the bantamweight roster, I think that it was Americans and Brazilians up until where Brett Johns was ranked and I’m looking at that and thinking, ‘Man, they need an English guy in there, someone to shake things up a bit.’ It’s time for us to mark our territory.”