More than a decade after his victory over Kris McCray to win the middleweight tournament on Season 11 of The Ultimate Fighter, Court McGee is still plugging away.

Now a 37-year-old veteran who has made 18 trips into the Octagon, the proud father of three has finally reached a stage in his life and his career where breaking camp at home in Utah and jetting to wherever he’s slated to compete isn’t accompanied with uneasiness, nerves, and an assortment of questions that no fighter wants at the forefront of their mind when they’re readying to step into battle.

“For years, I was so worried about getting cut and injuries and I’d lose my mind comparing myself to all these other athletes and all these other things,” admitted McGee, who takes on Ramiz Brahimaj on Saturday night in Las Vegas, looking to earn consecutive victories for the first time since making the transition to welterweight nearly eight years ago. “Now I don’t care about where anybody else is at. I only care about what I’m doing. I don’t need to prove anything to anybody.

“I feel good in every aspect of my life, I want to be in there, and I’m not dreading it,” continued the veteran, who carries a 21-10 (9-9 in the UFC) record into the Octagon this weekend. “I’ve had times where I’ve dreaded fight week. I’ve dreaded the weight cut or the nervousness before I go out, but not this time. I welcome all that stuff. I’m ready, man.”

A lot of McGee’s feelings of uncertainty and anxiety about things stem from his struggles with addiction.

Though he now has more than 15 years of continuous sobriety under his belt, there were times when the thoughtful and durable grinder’s life was dictated by his vices, and the idea of building anything positive, let alone sustaining those things long term, was unfathomable.

Day-by-day, that belief gets a little greater, a little stronger, but the concerns that it could all come crumbling down for one reason or another never fully fade, and when you combine that with the up-and-downs of a career forged inside the cage, it’s easy to understand how those distracting questions and uncomfortable feelings would crop up as fight week drew closer.

But nearly a dozen years into his UFC adventure, the veteran is finally at a place where he’s clear of the thoughts that made readying to step into the Octagon even more challenging, and ready to continue writing the next chapter of his career. 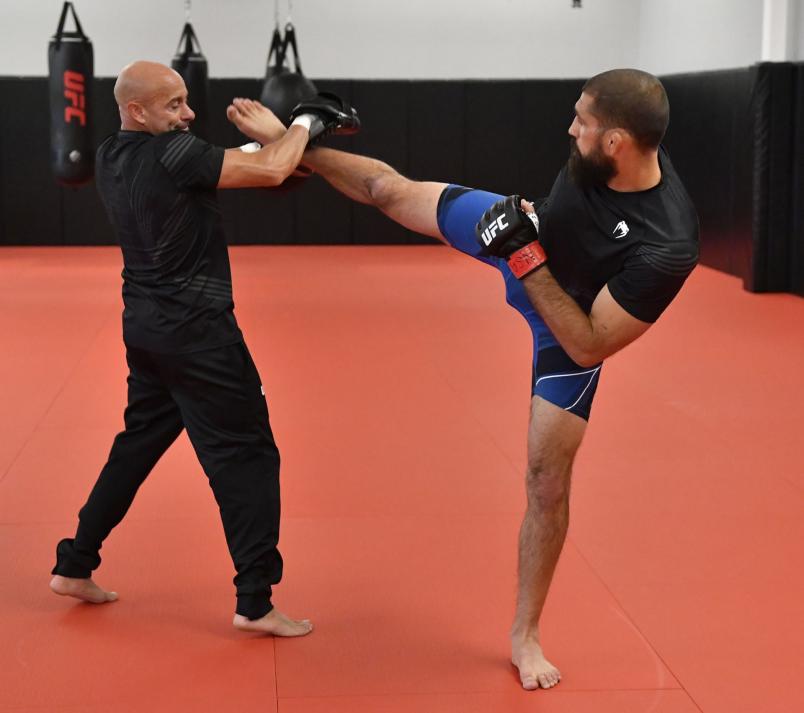 Court McGee warms up backstage during the UFC Fight Night at UFC APEX on May 22, 2021 in Las Vegas, Nevada. (Photo by Mike Roach/Zuffa LLC)

“I’ve had 16 decisions and I think this will be my 23rd fight in the UFC — and I count the four fights that I had on The Ultimate Fighter because all them dudes fought in the UFC,” said McGee, who faced Nick Ring, James Hammortree, and Brad Tavares on the way to the TUF 11 Finale, where he submitted McCray before delivering a memorable, teary-eyed address following his victory. “I think that I have that maturity and the confidence, plus I’m not forced to go in there and fight right now because I’m not running out of money.

“I’m part-owner of a gym now, I have the speaking and The McGee Project, plus I get to help kids and work with people that struggle with addiction. My recovery is strong. I have guys that I shepherd through a 12-step program. I’m active in my sons’ wrestling life.

“I’m happy and I feel good about what I’m doing. I have something pushing me saying, ‘Hey man, you’re not done yet.’”

There have been many times in his lengthy career where McGee has been forced to ask himself if he wanted to continue competing.

After fighting three times in 2013, he missed the next two years, laid up as a result of multiple wrist surgeries before returning and registering a unanimous decision victory over Marcio Alexandre Jr. at UFC 194 on his 31st birthday. He’s watched multiple training partners navigate the whole of their careers and move on to the next stage of life, and had a front row seat to see several different high-impact fighters burst onto the scene, take the sport by storm, and then fade out, all while he’s been plugging away.

Along the way, he’s continued to check in with himself, measuring his internal drive and desire, and while there have been more than a few moments where he’s wondered if he was simply fooling himself into believing he could still compete at this level, his most recent result shows he absolutely still can.

“In that fight, I was like, ‘I don’t care. I’m throwing caution to the wind,’” he said of his May meeting with Claudio Silva, where he earned a dominant unanimous decision victory to snap a three-fight slide. “I didn’t care that he was an IBJFF world champion and a world-class grappler — I’m a world-class grappler; I just stopped competing in grappling because I pursued a career in the UFC. 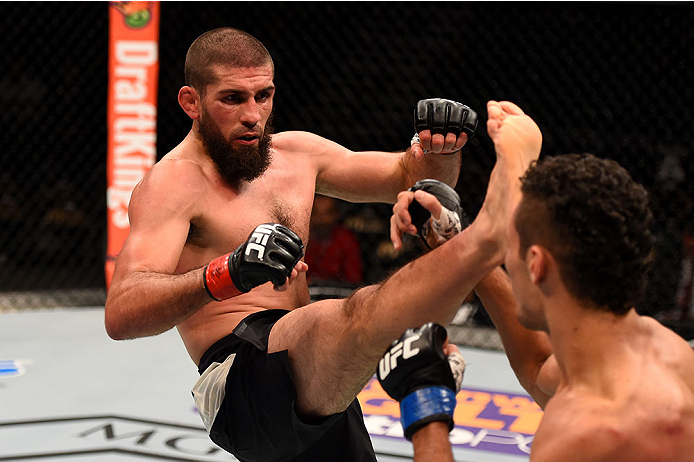 “I thought, ‘I’m going to go out and I’m going to let it go,’ and when I got done with that fight, I thought, ‘You need to be a little bit more confident in yourself, throw caution to the wind, and get out there and show them ‘The Crusher.’”

McGee isn’t the first fighter that has struggled at times to flip the switch and tap into his “in-cage persona” in a timelier fashion, and he certainly won’t be the last.

Fellow welterweight Bryan Barberena shared a similar story ahead of his victory over Darian Weeks at the start of December, echoing the challenges of transforming from mild-mannered Bryan to “Bam Bam” as soon as he comes through the curtains leading to the cage.

“For years I had problems hurting people,” continued McGee, “but it’s like my neighbor across the street said — ‘For 15 minutes, you need to be ‘The Crusher’ and go out there and crush ’em, and after that, you can be the dad, the neighbor, the everyman, the speaker. When you’re in there, you have to have that stage character.’

“That’s the only thing I thought about going into the cage, and it worked, so I’m not going to change it.”

It may sound strange to some to hear an 18-fight UFC veteran — a guy that has been competing in the promotion for nearly a dozen years and logged nearly 250 minutes of time inside the Octagon — admit to struggling to hurt people or finally now coming to accept that he has to be aggressive and not worry about his opponent’s well-being for the 15 minutes or less they’re locked in the cage together, but it again all goes back to who McGee was in his previous life, and the duty he carries as a person in long-term recovery.

What a powerful experience in a small town called Nephi, UT. Grateful to all those involved in making the event special. Big thanks to Chelsie and Central Utah Community Center for sponsoring the event. #nephi #the_mcgeeproject #courtmcgeemma #ufc #communityevent #speaking pic.twitter.com/9ikSlMHzEl

“Do no harm” is one of the foundational elements of recovery programs and separating that out when it comes time to “go to work” can be a difficult thing because caveats and exceptions aren’t generally something you deal with when you’re trying to follow a program to get your life back on track and keep it moving in a positive direction.

But all these years later, McGee is finally coming around to striking that balance — of being “The Crusher” from the moment his music hits and he starts walking out to the Octagon — and he’s reached a point where he knows he’s earned the right to step into the fray and showcase the full extent of his talents.

“What’s the difference between winning and losing?” he asked rhetorically. “Maybe it’s the mental side, because I know it’s not the physical, the toughness, or the ability; it’s the application in the fight. So, for me, I just need to know I’ve got good coaches, I’m training the right stuff, and if I do that and I know that, now I have to turn that switch on and get after it.