No More Doubts for Ryan Bader

"For me to lose and come back, it’s definitely gonna be a lot sweeter for
me to reach my ultimate goal, which is to get the title." - Ryan Bader 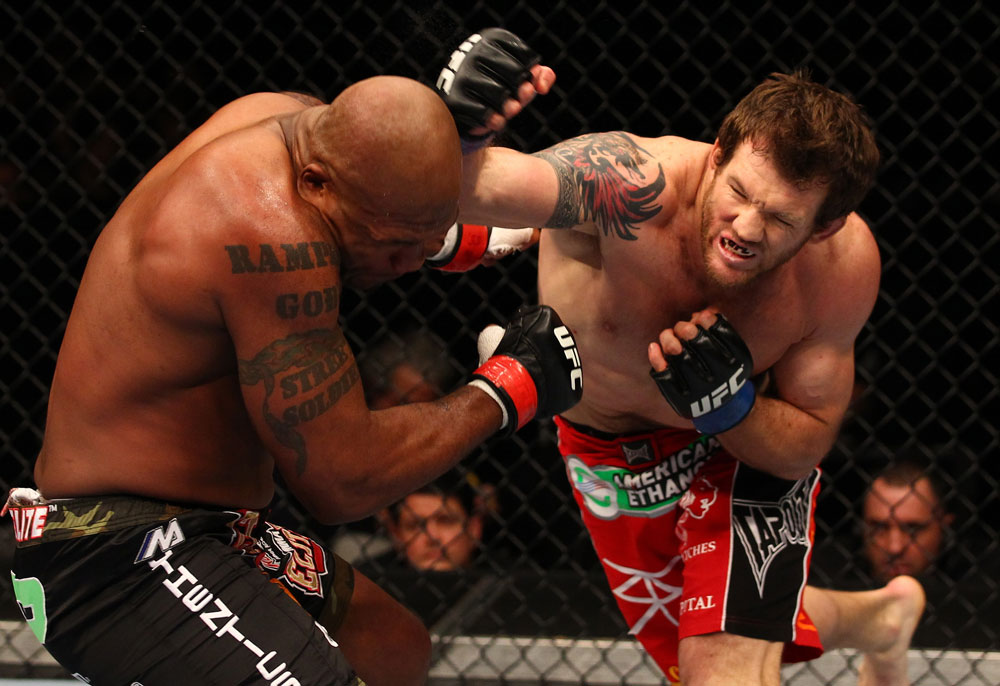 In all honesty, they don’t come classier or more professional than UFC light heavyweight Ryan Bader. Always on top of his responsibilities in and out of the Octagon, he’s one of those athletes that it’s impossible not to root for.

But some will find a reason. And after two well-documented losses to Jon Jones and Tito Ortiz in 2011, Bader’s once packed to the gills bandwagon began to empty. No longer was the Ultimate Fighter season eight winner destined for stardom and a world title. To the naysayers, he was a cautionary tale for too much too soon.

At this point, most athletes would lash out at their detractors, come up with a stack of excuses, or simply shut themselves off from the world. Bader did every interview, answered every question about the worst two nights of his career, and he did it with grace. So when “Darth” Bader rose from the ashes to knock out Jason Brilz and then win a lopsided decision over former world champ Quinton “Rampage” Jackson, you almost expected – and maybe even hoped – for him to look at the camera and say ‘I told you so.’

“Maybe after this one,” laughed Bader, referring to his Saturday co-main event bout on FOX against another former champ in Lyoto Machida. But even after saying that, the truth comes out.

“I’ll never come out and say it, and it’s not as much as an ‘I told you so’ to doubters or anything, but it’s more for me,” he explains. “I changed a lot of things up after that (the two losses) and it’s been showing. So it just lets me know that I’m doing the right thing and I could really care less if people are gonna doubt me. I like to play that underdog role like I did in my last fight and like I’m going to in this fight, and to go out and get the win, there’s no better feeling than that. Getting a win is awesome when you’re supposed to win it, but coming from the underdog role when people are doubting you and saying there’s no way you can win and going out there and doing it, I think it just opens up people’s eyes a little more, and for me, it’s gonna show how I’ve changed so much as a fighter.”

Still fairly young in his UFC career, with nine fights in the Octagon since winning TUF in 2008, Bader had little difficulty keeping his unbeaten record intact in those early days, beating the likes of Red Schafer, Keith Jardine, and Rogerio Nogueira with an attack mainly based on his All-American wrestling background and a thudding right hand. But after the dynamic Jones and the seasoned vet Ortiz put two notches in his loss column, it was a sign for Bader to either regroup and show that championship potential again, or to start the fade into obscurity.

He showed that championship potential again.

And though the 77 second knockout of Brilz in November of last year was a nice clip for the highlight reel, it was his trip to Japan in February to face Jackson that showed what he was made of, as not only was this supposed to be the PRIDE veteran’s triumphant return to the Land of the Rising Sun, but the former UFC champ came into the fight at 211 pounds, immediately placing Bader at a physical disadvantage. But Bader shook off any negatives and shut Jackson down and out. If there were doubters after the Ortiz fight, they had plenty to chew on.

“It was an awesome experience to go over there and fight a big name like that,” he said. “I knew I belonged there even though the last couple showings when I lost didn’t show it. I feel like I’m just getting started on my MMA career with switching everything up, and I feel like I’m finally in the right place where I needed to be. I feel like I’ve grown more in the last year that I’ve been working with the new coaches more than I ever have in my whole career.

“It was a huge win to go in there and take Rampage out and I want to keep that going,” Bader continues. “A lot of people were like ‘oh, he was hurt,’ this and that, but I went in there and convincingly beat him, did my job, and I think this fight (against Machida) is gonna prove that ‘oh, maybe it wasn’t Rampage, maybe it was Bader. Maybe he is getting that good now.’”

The main change that Bader refers to is bringing in long-respected coach Tom Vaughn and a group of other coaches (Ray Stafford, Andre Maracaba, Danny Brandt, Jason Kamens) into his Power MMA & Fitness gym in Gilbert, Arizona to prepare him and his teammates completely for their fights. There’s no more winging it these days, and that’s never been more evident than in the lead up to Saturday’s fight, where Bader isn’t taking the tact of ‘well, Machida is a complex puzzle, so I’ll just focus on me.’

“In the past I would have said that,” he admits. “I would have been like ‘well, I’m just gonna worry about myself,’ and our gameplan would have been to go in there and try and take him down. Since we switched everything up, our head coach Tom Vaughan is awesome and he brings in sparring partners every fight. For Brilz and Rampage he brought in guys that resembled them, and we actually found the best sparring partner that I’ve ever had, as far as resembling an opponent, for Machida, and that’s kind of funny because he’s probably one of the hardest ones to replicate. But Hiroshi Allen from Vegas has come down every other week, he’ll be in my corner, and we spar and drill. He won the karate world championship, he’s trained with the Machida family, he watches tape and he can emulate him. So we’ll drill, he’ll go over what he sees, and then we’ll spar, so I’ve seen Machida fight hundreds of times in the gym. In the past, I would have just shown up and just been like ‘okay, here it goes.’”

The stakes are too high for that now, and Bader knows it. Losing a fight or two will rarely crush a career, especially one as promising as the 29-year old Arizonan’s, but with UFC President Dana White declaring that the most impressive 205-pounder emerging from this weekend’s card will be next in line for a shot at the belt, it’s a once in a lifetime shot to control your own destiny.

It’s not the conversation you would have expected to be having with Ryan Bader at this time last year. He had just come off two losses and was surrounded by question marks. But since then, he’s ticked off each question with a resounding positive answer. Saturday night, he’ll step up to the plate yet again, with doubters and supporters both jockeying for position. Yet surprisingly enough, he wouldn’t change a thing.

“I needed that adversity,” he said. “I needed to taste that defeat and have those couple losses in a row. If I didn’t lose to Tito, I would have been doing the same thing and I wouldn’t have branched out and found different coaches, and I wouldn’t have been training like I am now. I would have been doing the same old thing and I would have paid for it down the road. So for me to lose and come back, it’s definitely gonna be a lot sweeter for me to reach my ultimate goal, which is to get the title. I think this was just part of being a fighter and growing and learning. Now, when I get in the cage, I’m excited and ready to go instead of being nervous and doubting myself. There are no more doubts.”