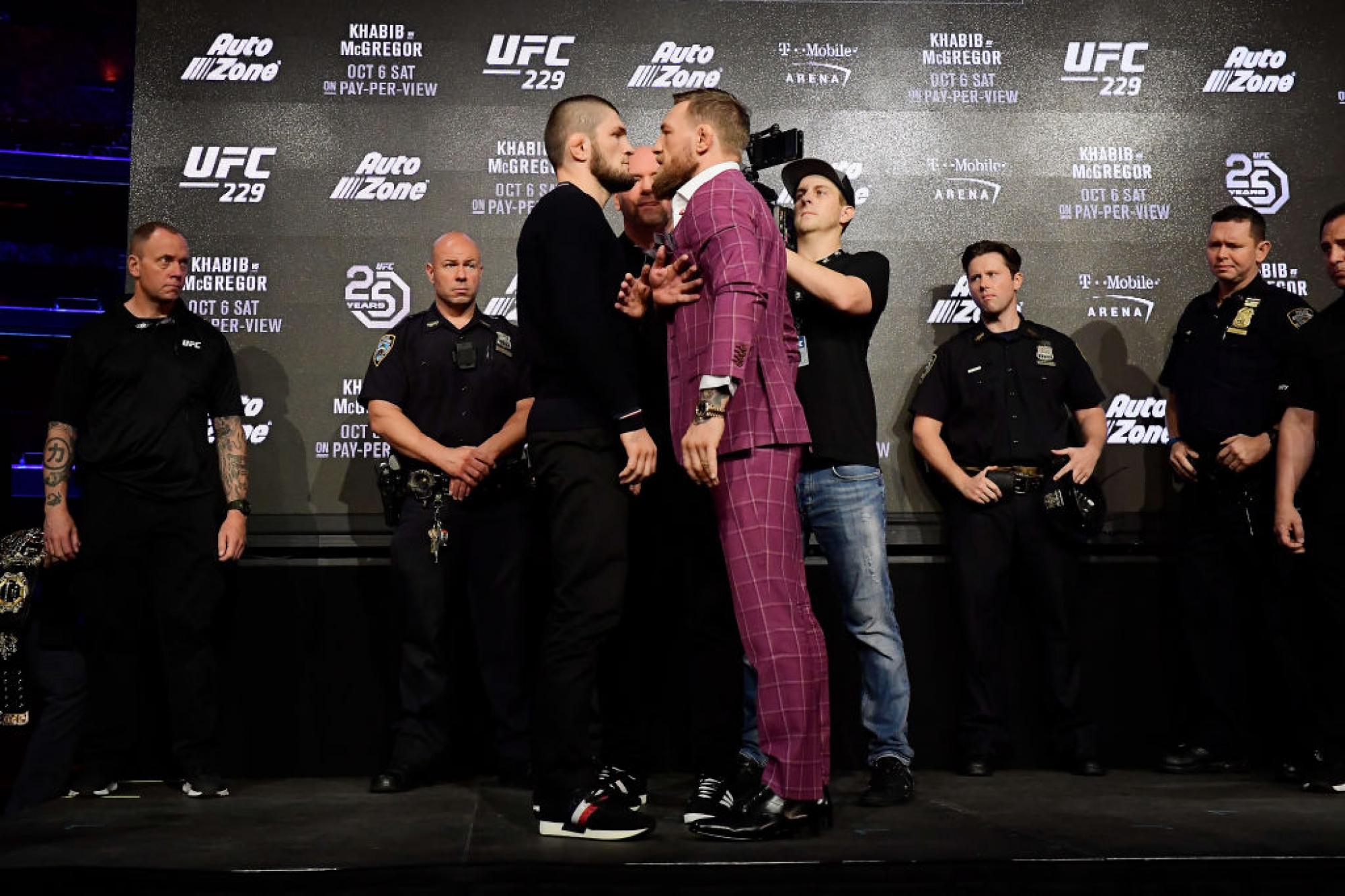 No Love Lost Between Khabib & Conor At UFC 229 Presser

NEW YORK – The combatants in the main event of UFC 229 have kept a fairly low profile in the lead-up to their October 6 showdown in Las Vegas. But across the country in the Big Apple on Thursday, UFC lightweight champion Khabib Nurmagomedov and former two-time titleholder Conor McGregor made up for lost time during a raucous press conference at Radio City Music Hall.

Well, at least “The Notorious” one did, as he took every opportunity and every angle to rip into his rival, with most of the barbs being greeted by a bemused grin or a shake of the head from the soft-spoken Dagestan native.

“This is what I expected,” said Nurmagomedov. “He’s gonna talk. The sixth of October is what’s important.”

That’s not to say the challenger wasn’t able to get a rise out of the champion. Yet while jabs about Nurmagomedov’s father, finances and nation saw the 30-year-old seething a bit, it was the references to McGregor’s infamous hand truck throwing incident before April’s UFC 223 event in Brooklyn that got Nurmagomedov a little heated.

And for all the bluster and back and forth, the fight is really all that matters, and it’s the biggest one of 2018. The reason is simple. Nurmagomedov is 26-0 and he’s been as dominant as that record would denote. McGregor, well, is McGregor. One of only two fighters in UFC history to hold two titles simultaneously, the Dubliner has become a crossover star of epic proportions, even making a move to boxing last year to debut in the ring against future Hall of Famer Floyd Mayweather.

It wasn’t a victorious move, but it was a lucrative and successful one, and now he’s back in the Octagon for his first appearance since he stopped Eddie Alvarez for the lightweight title at UFC 205 in November 2016.

“I’m going to put him back to boxing,” said Nurmagomedov. “You come here for money. I come for legacy.”

“I came back for the love of this,” countered McGregor, who saw his title go to Nurmagomedov in April, as “The Eagle” defeated Al Iaquinta for the belt. It was the typical swarming and dominant effort from Nurmagomedov, yet despite his dominance, he’s not taking his foot off the gas in preparation for McGregor.

“I’m not underestimating him and when I go to the cage I’m gonna go like it’s my last fight,” he said. “I think it’s gonna be long night for him.”

RELATED: See The Full Press Conference | The Wait Is Over

“You dive on to the legs and hold on to them for dear life,” said the challenger. “What kind of fighting is that? I hope it’s a long night.”

And that’s the big question: Can McGregor stay off the mat against perhaps the best grappler he’s faced thus far in his career? Nurmagomedov says no.

“I think I’m gonna make him tired and after, play with him,” he said. “Because when he’s tired, he always gives up.”

Of course, McGregor believes it won’t get to that point.

“I know a glass jaw when I see one and I’ve seen this man wobble many times. I know he is afraid of a smack, and if you’re afraid of a smack off me, a smack will feel like a double-barrel shotgun.”