"I’m just trying to let all this experience help me as a person and not detract from me, and that’s always been a definite goal of mine." - Amir Sadollah 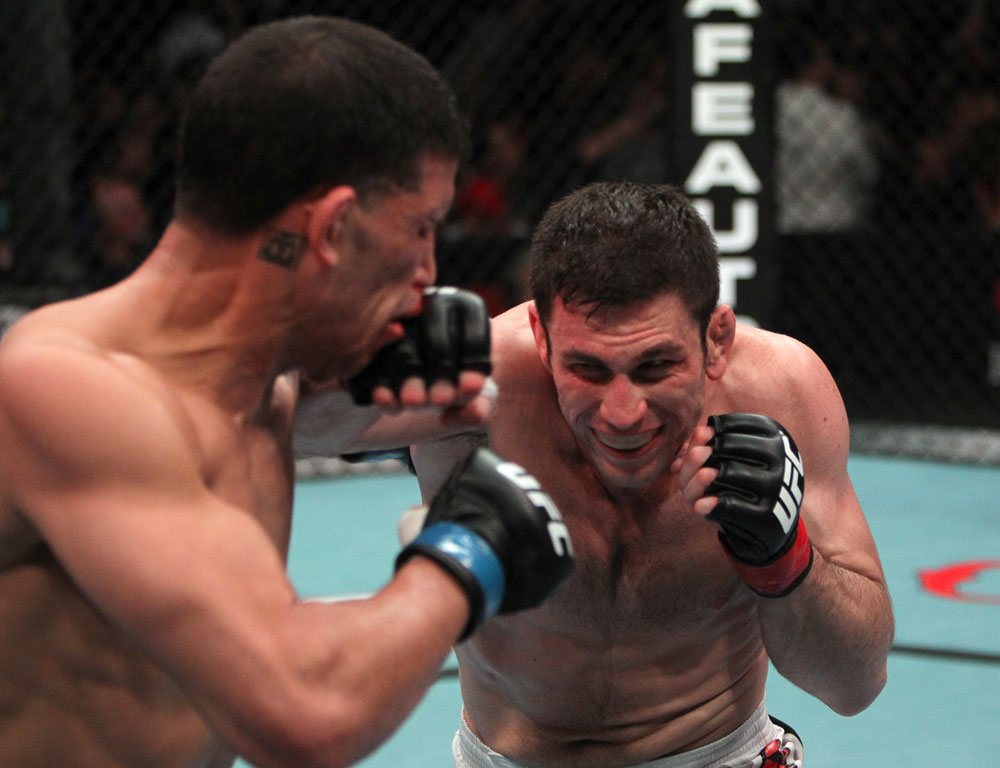 UFC welterweight Amir Sadollah falls into the latter category, and he has no shame in admitting it.

“I get beat up in the gym all the time,” said the Ultimate Fighter season seven winner, who returns to the state he grew up in, Virginia, to battle friendly rival Jorge Lopez this Tuesday on FUEL TV. “I have my share of bad days, but I think that’s always been a strength of mine (to come back from that and perform on fight night). I’m not going to say I don’t try in practice, but I’ll be trying on certain things and kind of letting things happen. And at the end of the day, I think what I’m doing is really training and really practicing and experimenting in training, where it doesn’t matter. It doesn’t matter if you get tapped out of beat up, as long as you’re applying what you’ve learned on fight night.”

So if Lopez believes that his sparring sessions with Sadollah a while back have prepared him for what he will see in Fairfax in two days, not so fast, says the 31-year old vet.

“Even if you trained with someone recently, training is different from a fight, and I think you’d be foolish to really think you can know what’s gonna happen,” said Sadollah. “I don’t know about him, but I know I fight very different from how I train. It’s good to have an idea, but at the same time, you just have to go ahead and continue with your gameplan and not worry about what they’re gonna do.”

That’s just another part of the educational process of Sadollah, one of the rare athletes who has fought his entire professional career under the UFC banner. To succeed in the Octagon and stay here for nearly four years is a significant feat. To do it without any prior pro experience takes things to a whole other level. Sure, there have been ups and downs for Sadollah, but the ups have kept the downs from overwhelming him. Needless to say, he has no regrets.

“I always wish I can do what’s best for my career and make it optimal, but I was kinda thinking about that (fighting his whole career in the UFC), and I wouldn’t change anything,” he said. “I’m glad that I got to jump in the big leagues, and I’m proud of all my wins and losses in the UFC. It’s the big stage and you gotta be confident to be there, and I think that was best for me. My personality’s the same way. I want the challenge, and I want the high risk / reward. Of course it’s much harder to fight in the UFC than on the local circuit, but at the same time, if you can do it, you’ve got something to be proud of.”

Winner of bouts over CB Dollaway, Phil Baroni, Brad Blackburn, Peter Sobotta, and DaMarques Johnson, Sadollah has proven himself in the Octagon, and even his decision loss to veteran Duane “Bang” Ludwig in August of last year proved to be educational, as he got to test his standup skills against one of the best technical strikers in the game. He didn’t come out on top, but he got plenty of things to work on moving forward.

“For me it was important,” said Sadollah. “I’ve always seen so many fights in the UFC that are these great promised striking battles, and then they turn into a grappling match. And not that I’m so vain that I wouldn’t try to win the fight, because I definitely went for takedowns in the fight and Duane did a great job on the feet in defending that stuff. But for me, he’s a great striker and definitely the best I’ve faced so far, so it was important to know that I wasn’t gonna ditch out on the striking. I was there to fight and win, but I also wanted to fight the best and learn from that experience, and I feel like I did that.”

Injuries have kept him sidelined since the Ludwig bout, with his original UFC 143 meeting with Lopez becoming a casualty as a result. But when he was able to train, Sadollah made sure he was in the gym, not just to get in shape and keep sharp, but to learn.

“It was unfortunate that I was injured, but the upside of all that is that training for the period that I was able to and then going into this camp, I noticed all these, not shortcuts, but things I was doing efficiently and doing well in my camp, and things that historically I had stressed about, I wasn’t stressing about anymore,” he said. “It showed me that maybe I’m starting to get the hang of this.”

You rarely get this kind of honesty anywhere in the sports world, but particularly in the fight game. Most fighters don’t want to show the process to get to this point, to admit that maybe they don’t know it all. To those athletes, that just gives an opponent ammo for an upcoming bout. Sadollah has never been a typical pro fighter though, and in all honesty, he’s the same person today that he was when he first appeared on the world’s radar on The Ultimate Fighter in 2008. That’s admirable.

“It would be wrong to say that nothing has affected me, but I’m just trying to let all this experience help me as a person and not detract from me, and that’s always been a definite goal of mine,” he said. “Obviously I want to be in the UFC and perform to the best of my abilities and fight the biggest fights and be the best, but you don’t want to let your own hype take away from who you are and I’ve been fortunate enough to have supportive family and friends to keep me grounded.”

Being humble is the first step to getting better. If you know it all, you’re not willing to learn. Amir Sadollah has checked his ego at the door of every gym he’s been in over the last few years, and now he’s beginning to reap the benefits.

“I’m starting to feel like these lessons are accumulating and I’m starting to learn the tricks,” he said. “I’m far from being a master, but I think I’m definitely past being green.”