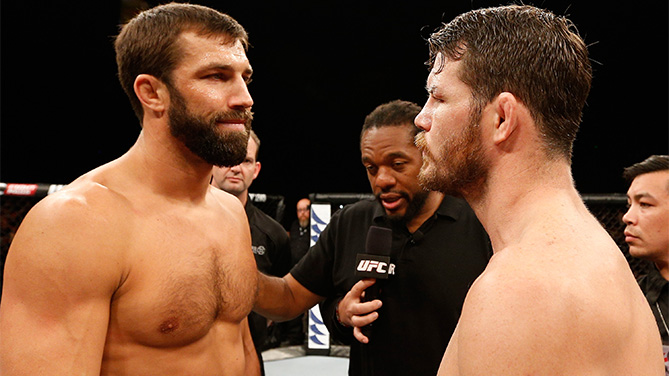 On a thrilling night at the Allphones Arena in Sydney, Australia that saw a UFC record set for most finishes in one event with 11, it was only fitting that middleweight contender Luke Rockhold ended his feud with Michael Bisping with a spectacular submission, forcing “The Count” to tap out in the second round of the UFC Fight Night main event.

Each bout on the card ended before the final horn sounded, with the 11 finishes surpassing 2008’s UFC Fight Night 13 and 2013’s UFC on FUEL TV 10 cards, each of which had 10 early endings.

But no finish was probably sweeter than Rockhold’s submission of Bisping, as the two traded barbs with each other for the past few months leading up to Friday’s bout. When it was over though, the two buried the hatchet.

“It’s in the past now,” Rockhold said. “I don’t think we’ll ever be friends but I’ve got a lot of respect for him. He’s a warrior.”

Bisping had similarly respectful words for his former nemesis, while insisting that this setback was only a minor one.

Bisping stayed busy with his striking as the bout began, but he found himself in a bit of trouble in the second minute when a clash of heads reopened a cut over the left eye that Bisping had initially suffered in the late stages of his training camp. The bout was halted momentarily and while “The Count” wasn’t hurt, he did seem to lose his focus as he complained to referee Herb Dean about the situation. Rockhold stayed cool, calmly walking down his foe. Two hard body kicks appeared to jar Bisping as the clock ticked down, leading Rockhold to pick up the pace.

With Rockhold’s promise of a first-round finish out the window, it was going to be interesting to see if the Californian was going to lose his composure, but a stiff left hand to the head in the first 30 seconds of round two answered that question, with a kick to the head making it even more emphatic as Bisping fell to the deck. With his foe down, Rockhold sunk in a guillotine choke, forcing the tap 57 seconds into the round and making a statement in the process.

“I’m the number one contender and Ill prove it anytime I have to,” he said.

With the win, Rockhold improves to 13-2; Bisping, who had never been submitted before, falls to 26-7.
> Watch: Luke Rockhold and Michael Bisping Octagon Interview | Luke Rockhold Backstage Interview 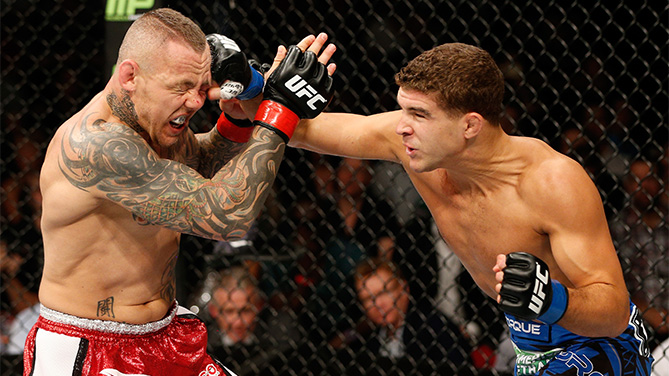 Some wondered whether TUF 15 alum Al Iaquinta was ready for his step-up bout against veteran contender Ross Pearson in the UFC Fight Night co-main event. They’re not wondering any longer, as Iaquinta put on a brilliant performance in halting “The Real Deal” in the second round.

The first five minutes delivered compelling action from both fighters, with Pearson stalking and Iaquinta sticking and moving. The New Yorker may have edged the round though with the more telling blows throughout.

In the second minute of round two, Iaquinta (10-3-1) dropped Pearson (18-8, 1 NC) with a right hand, and while the Brit got back to his feet, “Raging” Al wouldn’t let his opponent off the hook, continuing to pour it on until referee Leon Roberts stepped in to halt the bout at 1:39 of the second frame. 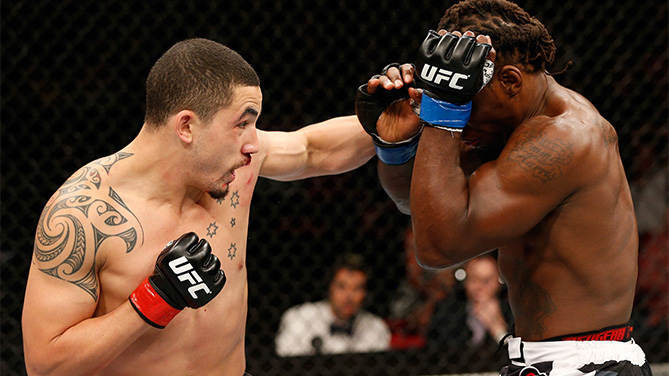 TUF Smashes winner Robert Whittaker made a successful move to the middleweight division and looked better than ever in stopping Clint Hester in the second round of an exciting slugfest.

Both fighters got right down to business, rocking each other simultaneously in the early going. Hester seemed to get the worst of it though, and Whittaker knew it, moving forward behind a stiff jab. Hester did score with a spinning elbow that sent shockwaves through the crowd, but Whittaker took it well, showing no ill effects at all. Midway through the round, Whittaker dropped Hester with a right hand, and though the American was able to survive the initial onslaught, Whittaker’s steady pressure kept him in control until a late ground reversal from Hester just before the bell.

Whittaker’s sharp striking and Hester’s haymakers made for compelling action in round two, but after a brief tie-up against the fence, the two broke free and Whittaker exploded, putting Hester on the deck with a knee to the head. Sensing the end, Whittaker emptied his tank with lefts and rights, referee John Sharp stepping in at the 2:43 mark.

With the win, Whittaker improves to 14-4; Hester, who lost for the first time in five UFC bouts, falls to 11-4.
> Watch: Robert Whittaker Backstage Interview 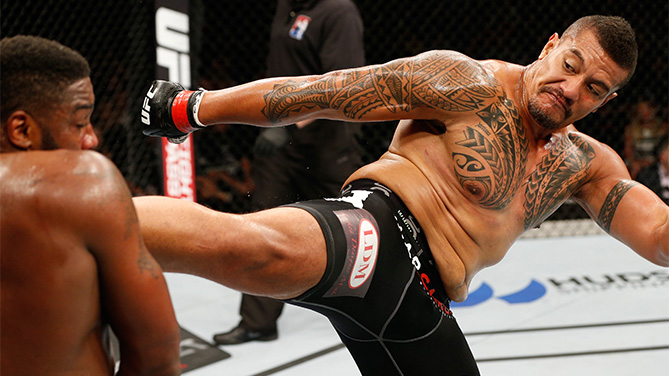 Aussie finishing machine Soa Palelei put another knockout win in the bank, halting Walt Harris in the second round of their heavyweight contest.

After an action-packed prelim card, Palelei and Harris were expected to bring the heat too, but the first round of their bout didn’t provide any significant action outside of a couple kicks from both fighters that landed but didn’t do any serious damage.

The pace picked up in the second, with the stalking Palelei getting the better of Harris as the round progressed. With a little over a minute left, Palelei got his first takedown, setting up his trademark ground-and-pound attack. And though it didn’t seem like Palelei had enough time to finish, he did, pouring it on with seconds left to bring in referee Leon Roberts to step the bout at 4:49 of the round.