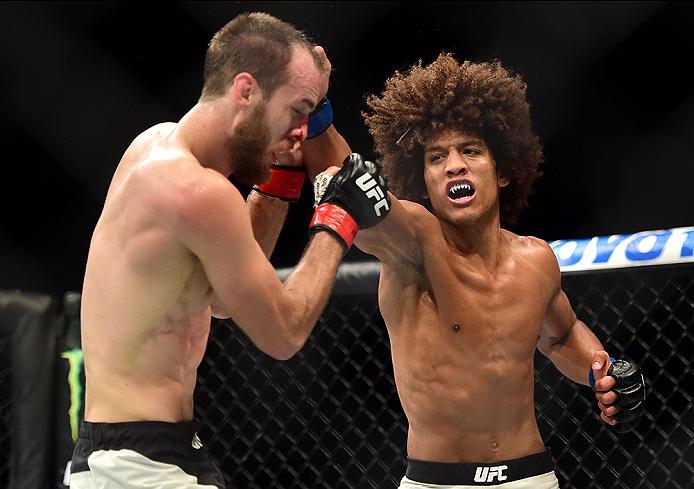 At one point, Alex Caceres was seen by some as a flash in the pan, a charismatic young man who was going to make a little noise in the Octagon and not be heard from again. Yet over five years after his UFC debut in March of 2011, he’s not only still here, but he’s about to headline this Saturday’s Fight Night event in Salt Lake City against Yair Rodriguez.

Not many people can say that. In fact, out of the Ultimate Fighter 12 cast that he emerged from, only Caceres and Michael Johnson are still on the UFC roster. But “Bruce Leeroy” isn’t one to say “I told you so.”

“Honestly, I could really care less about what other people think of me,” the 28-year-old said. “If they want to respect me or not, I haven’t really changed much. If people want to say that I changed and I’m maturing and I’m a little different, it’s obvious that they haven’t been paying attention, that’s all.”

He has changed though, even if he doesn’t think he has. Sure, he still has the megawatt smile and trademark afro, but as a fighter, he’s not the same one that lost his first two Octagon bouts to Mackens Semerzier and Jimy Hettes. He’s had his ups and downs since those early days, but in his return to the 145-pound weight class after a 10-fight run at bantamweight, he’s shown a maturity to go along with his usual cool, beating both Masio Fullen and Cole Miller in 2016.

A lot of that has to do with joining the MMA Lab squad in Arizona, and he’s even upped the ante by moving to the state from his hometown of Miami.

“It’s not too bad,” he said. “I like it better. It’s a little bit more slow-paced and I like the hiking culture. The heat is one thing, but you can deal with it.”

As for the clearly different energy going from Miami to Glendale, that’s not an issue in the slightest.

“I never was a person for the club scene or bars,” Caceres said. “I was more of a homebody all the time. They had to drag my ass out.”

It’s a stark contrast to the image many have of Caceres, but as he points out, he saves his serious side for “real” life.

“When you think about life, I can name a thousand things a lot more serious than fighting, like having kids or helping people,” he said, and while he takes his martial arts and his career seriously, he also realizes that in this journey, smooth sailing all the time is nothing but a myth.

“I think that the fight game, martial arts, and the journey of life is just a long and bumpy road.” Caceres said. “We’re going to have our ups and downs and we just have to accept it. No matter how many times we fall down, we’ve just gotta get back up, get right back on the horse and keep on riding into the sunset.”

It’s a great attitude to have, but one that doesn’t always mesh with life in the fight game, where a fighter is often seen as being only as good as his last fight. Caceres scoffs at such a notion, proving that while he might dispute this, the wild kid from Miami has grown into a mature young man who has a firm grip on reality.

“Those people don’t pay your bills, they don’t sleep with you at night and they don’t hold you when you’re down,” he said. “So their opinions don’t really matter.”