No excuses: Miller looking to right his losing skid in Dallas 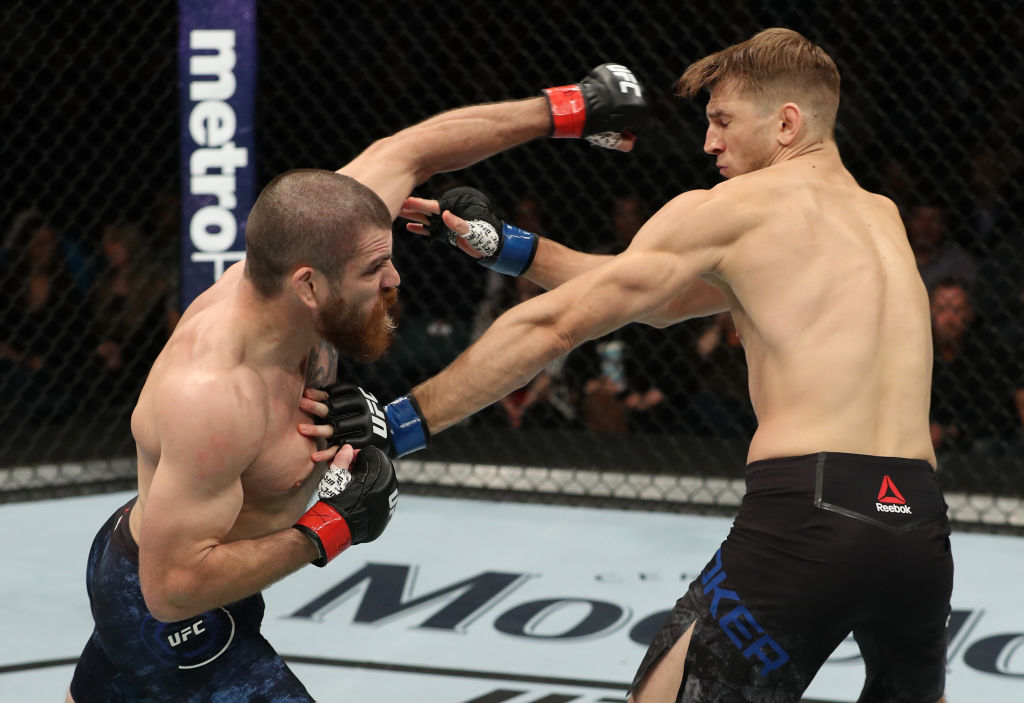 Jim Miller is not the type to make excuses.

While some of his contemporaries are quick to detail every injury and inconvenience that arose during fight camp or how each loss could have been a win if not for one thing or another, the long-tenured lightweight prefers to let his results stand on their own and people to think whatever they want about his performances.

That’s an easy approach to take when things are going well and everyone is singing your praises, but it’s far more difficult when you’ve just turned 35 and are heading into battle this weekend on a four-fight skid.

Yet the stubborn veteran still has a difficult time talking about the illness that has hampered his ability to compete at the level he is accustomed to over the last several years.

“I honestly don’t want anyone to know the B.S. that I’ve had to deal with because it hasn’t been easy,” says Miller, who was diagnosed with Lyme disease prior to his UFC 200 bout with Takanori Gomi. “This has been trying; it definitely has been trying.”

The veteran from Sparta, New Jersey has never been the biggest or the strongest fighter in the division. He’s not what talent evaluators in the stick and ball sports would call a “plus athlete,” but that never prevented him from having success in the deepest, most competitive weight class in the sport.

“I know my strengths,” begins Miller, who faces southpaw Alex White on Saturday night at UFC 228. “I’m not the most athletic guy. I’m not the most technical guy. I’m the guy who meets you in the center of that Octagon every second of that fight and if there is an opportunity for me to throw a kick or a punch or a knee or an elbow, I’m going to throw it. I’m not picking and choosing; I’m overwhelming people.

“That’s kind of why I picked the nickname that I picked too,” he adds.

A few fights back, Miller added the moniker “A-10” to his introduction, a reference to the Air Force jet commonly referred to as the “Warthog,” which was designed for close air support.

“I’m not a fighter jet. Some of these guys are fighter jets – the way they move, how fast they are. I’m slow and lumbering, but I can take a beating and I will f*** s*** up if given the opportunity.”

But for a long time, Miller wasn’t able to fight the way he normally does because he simply didn’t have the ability to do the work it takes for him to be able to be at his best.

Although he was able to follow up his victory over Gomi with wins over Joe Lauzon and Thiago Alves to enter 2017 on a three-fight winning streak, Miller still wasn’t close to 100 percent.

He couldn’t get through the strength and conditioning routines that had always been such a vital piece of his preparation, and while his technique and tenacity were enough to keep him competitive in bouts with Dustin Poirier, Anthony Pettis and Francisco Trinaldo, Miller was fighting without his greatest weapon – the ability to push a torrid pace and go forward at all times – and it resulted in the first three-fight losing streak of his career.

At the beginning of the year, Miller felt like he was starting to turn a corner, and heading into his date with Dan Hooker in Atlantic City, he was ready to put the previous few years of frustrations and struggles behind him.

He was training the way he did in the past – pushing hard in the gym, knocking out his strength and conditioning routine – and saw the showdown with the surging New Zealander as a chance to right the ship.

Roughly a minute into the contest, Hooker inadvertently poked Miller in the eye and while the veteran fought on and still managed to have some early success, his vision was compromised and two minutes later, “The Hangman” hit him with a knee that he didn’t see coming and his losing streak was extended to four.

“It happens,” he says of the eye poke. “I was ready to go and it’s just one of those things. We fight with open-fingered gloves and there is no way around that. If the ref saw it and the doctor came in and the fight ends there as a no contest, I’m still not going to be happy or satisfied with what went on and how the fight went.

“I still feel really good. I feel like I’ve finally gotten things under control and I’m able to train to bring out my strengths as a fighter, so there really was no question about fighting again or anything like that. In my mind, that last fight was against a guy that’s dangerous and something happened.”

With everything that has gone wrong and impacted his career over the last several years, Miller remains focused on the present and the future, disinterested in explaining away the past or putting it into greater context.

Life dealt him a whole bunch of lemons and he made the best lemonade he could.

But he’s finally back to feeling like his old self and champing at the bit to make the walk on Saturday night.

When he does, he’ll become the first fighter in UFC history to cross the threshold into the Octagon 30 times, an accomplishment that serves as a further testament to his toughness and resolve.

“It’s a pretty cool feather to have in my cap,” says Miller, who is one of just 13 fighters to make 25 or more appearances inside the UFC cage. “There is a certain group of fighters where we all started around the same time in the UFC and those are the guys that are around me and the ones that are going to be able to get over 30, but I don’t see a lot of the younger guys getting to that point because they don’t have as many opportunities.”

And while he’s proud of his achievement, the scrappy veteran is far more interested in just getting in there and mixing it up with White this weekend.

“He’s another tall lefty; that’s what I know about him,” laughs Miller. “Pain in my a**. He’s a young, tough kid. I’ve seen him fight. He’s dangerous, but everybody is dangerous.

“I train to get myself better and to push myself and to be able to overcome things in the fight; that’s what I’m worried about. I’m trying to have my skills be the best in the world and when they don’t match that level, that’s when I capitalize.

“Honestly,” he continues, “I want to do it to show myself what I’m capable of, most of all. I’m going to go out there and cut loose. I’m looking forward to finally getting the opportunity to go out and do what I do – to do what I’m made to do – and that’s fight aggressively and be on my opponent all the time.”