No Dream is Too Big for Andrew Craig

"I’ve got specific goals that I want to accomplish within the UFC. I want
to crack the top ten, and ultimately I want to be champion." - Andrew Craig 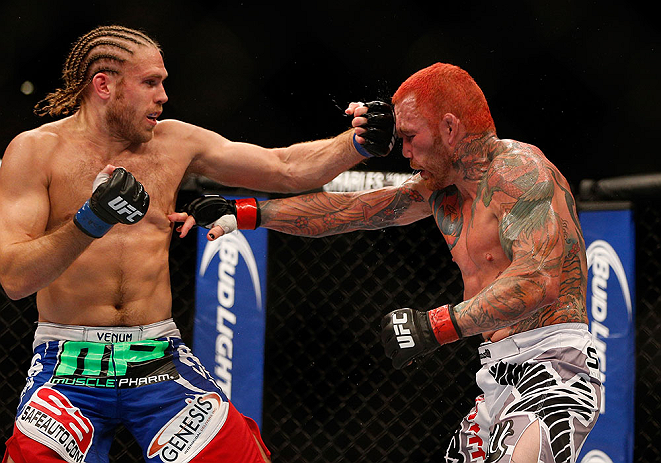 Due to a case of tonsillitis suffered by Andrew Craig, his bout against Chris Camozzi has been pulled from the card.

You’ve probably done it a million times before. Go to watch a video and as soon as that “skip video in three seconds” link comes up, you’re counting those seconds until you can skip the advertisement and see what you wanted to see in the first place.

But when Andrew Craig showed up in an ad for one of his sponsors, Onnit, saying “Wake up my friend,” I had to watch the entire clip, and for some reason it stuck with me as he told his story of coming out of college with no combat sports experience but a desire to one day become a UFC fighter. And yeah, he did it.

So where does that possibly come from?

Maybe, but it worked. And while hard work, talent, and a high level of stubbornness certainly aided in his road from college to the UFC, the biggest step he took was winning the battle with himself.

“There was a lot of trepidation and silencing the doubt in your mind,” said Craig. “The great thing about where I’m from and the people I surround myself with is that there was not a lot of doubt around me. Everybody believed I could do it, everybody felt I had it in me, so the biggest doubt was in my mind.”

Eventually though, he overcame it, and two years and five Octagon fights later, the Texan is preparing for a fight in Abu Dhabi this Friday against fellow middleweight prospect Chris Camozzi. So what was the point when he realized that his dream had the potential to become a reality?

“There wasn’t one particular point,” said Craig, who began training for his fight career in the fall of 2008. “I think it was the fact that I didn’t want to give up, ever. I didn’t lose until I was three fights into the UFC, so confidence continued to build off of each win, and all I could ever think about was getting to a bigger arena, having more fans, and just being more in the moment with it.”

Craig went unbeaten as an amateur, and after six pro wins without a loss, he got the call to the UFC to face Kyle Noke in the veteran’s backyard of Australia. Craig upset Noke, and he was on his way, winning two more fights over Rafael Natal and Chris Leben, with his only losses coming against Ronny Markes and Luke Barnatt. But don’t think he’s been able to sit back, put his feet up, and enjoy a job well done thus far.

It’s the adjustment every fighter must make. In some cases it takes years to get to the UFC, and once you hit the pinnacle of the sport, you either readjust your goals or you grow stagnant and wind up on the cut list. Craig readjusted.

“For the longest time, my goals were win the next fight, make it to the UFC,” he said. “And I would win fights, I made it to the UFC, and once I got there, I really didn’t have any specific goals set out. I’d already accomplished all of them and so I was kind of drifting. But I’ve realigned myself, and now I’ve got specific goals that I want to accomplish within the UFC. I want to crack the top ten, and ultimately I want to be champion. What do I have to do to become champion? I’ve got to crack the top ten, and what do I need to do that? I need to beat Chris Camozzi, probably beat the next guy, and then call out somebody in the top ten and move on from there and eventually make it to the championship.”

The Camozzi bout is an intriguing one, as it pits two fighters whose styles should mesh well together against each other with a lot on the line after recent losses. For Craig, his loss to Barnatt last October at least came with a Fight of the Night bonus, a consolation that didn’t console him too much.

“I’d much rather get paid less and win,” said Craig. So what went wrong that night in Manchester?

“A lot of things,” he said. “I don’t think I was as focused mentally as I should have been and I didn’t fight my kind of fight. Usually I’m a little more cerebral, a little more patient, and I just went out there looking for the fast finish. I was fighting a dude in his home country, so I just wanted to get in and get out, and I bit off a little bit more than I could chew and made some technical mistakes. So it was some mental under preparation that led to some technical mistakes.”

Mistakes he doesn’t expect to make again, simply because if you expose the same weaknesses over and over, you don’t last long here. To keep your job and make it up the divisional ladder, you have to be better than you were the last time, and for fighters like Craig, who are basically growing up in the organization after brief pre-UFC careers, you’re not graded on a curve. Here, it’s pass-fail, but he likes it.

“I wouldn’t have it any other way,” he said. “I’m glad I got in when I got in, and I think that makes me a stronger and better fighter and a little more mentally capable of handling criticism and what comes with the job.”

So don’t think that initial dream has turned into a nightmare or something less than what he first expected. Andrew Craig is doing just fine.

“It’s a blessing, it’s a dream come true, and I’m living out my fantasy of being a full-time fighter,” he said. “Being a fighter is the greatest job in the world. You get to train and hang out with your friends all day and learn how to be the best human weapon you can be. I don’t have too much to complain about.”