No Bonus Concern, Smith Wants To "Get In And Get Out"

Ever since Devonte Smith arrived on the UFC radar a year ago with a first-round finish of Joseph Lowry on season two of the Contender Series, he’s been nothing short of spectacular, adding two more early knockouts to his record.

But it was his UFC 234 win over Dong Hyun Ma in February that earned “King Kage” his first Performance of the Night bonus in the Octagon, which begs the probing question; did he buy anything interesting with his extra check?

Now that’s a young man with a goal and a vision and plenty of smarts when it comes to getting there.

“I got to, because money moves fast,” said the 26-year-old, who makes his third visit to the Octagon on Saturday to face Khama Worthy.

That fact doesn’t hit many fighters until it’s too late, but Smith, who spent plenty of time as a truck driver back in his home state of Ohio, knows that the window is small for a professional athlete, and he’s going to make the most of his time while he’s here. That doesn’t mean he wants to stick around longer than he needs to on fight night.

“Yeah, it’s always like that,” he said. “Get in and get out. I don’t like the Fight of the Night. (Laughs) They get bloody, you get your head beat in, and that ain’t fun.”

There have been no Fight of the Night wars for Smith thus far, and while he’s friends with and a former training partner of Worthy, who replaced Clay Collard, who replaced John Makdessi in this week’s bout, he expects to keep things moving at the pace they’ve been going at thus far. And if you haven’t been paying attention, that’s a fast pace, one so fast that Smith had to be reminded during this August 7 interview that this was the day he earned his UFC contract.

“Oh man,” he said. “It feels like it happened last week. Time flies by.”

But here he is, third UFC fight and already sitting in the featured prelim spot on ESPN. 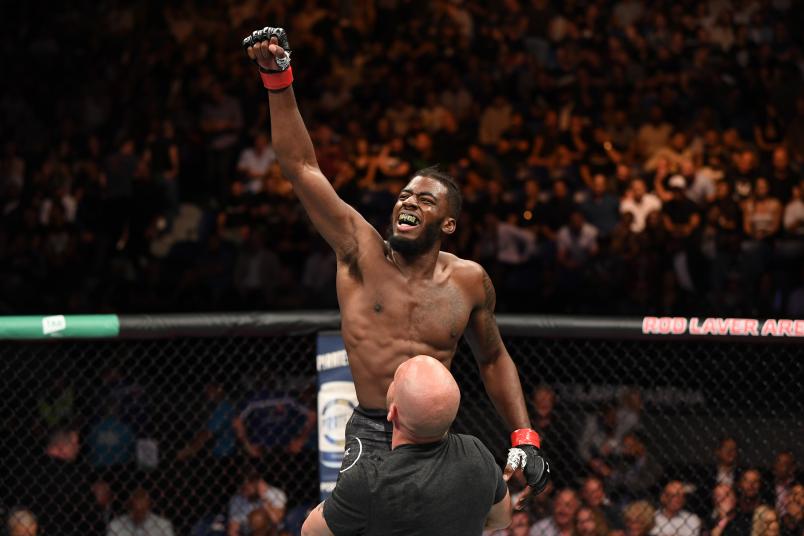 MELBOURNE, AUSTRALIA - FEBRUARY 10: Devonte Smith celebrates his TKO victory over Dong Hyun Ma of South Korea in their Lightweight bout during the UFC 234 at Rod Laver Arena on February 10, 2019 in the Melbourne, Australia. (Photo by Jeff Bottari/Zuffa LLC/Zuffa LLC via Getty Images)

MELBOURNE, AUSTRALIA - FEBRUARY 10: Devonte Smith celebrates his TKO victory over Dong Hyun Ma of South Korea in their Lightweight bout during the UFC 234 at Rod Laver Arena on February 10, 2019 in the Melbourne, Australia. (Photo by Jeff Bottari/Zuffa LL

Not a bad run thus far, but despite the whirlwind, the lightweight prospect from Colorado’s Factory X squad is taking time to enjoy the ride.

“My mom and my dad are always telling me to enjoy the journey, so instead of looking at it like a job, I gotta look at it like there are billions and billions of people who are out there working 9 to 5,” Smith said. “I’m someone who’s blessed enough to be in the position that I’m in where I don’t have to do what I don’t love. I’m doing what I love to do and I’m having fun with it. Sometimes it does feel like a drag, but it’s all for the end goal, which is to become the champion and bring that belt back to Cleveland, Ohio and Denver, my second home, too. And I’m enjoying it.”

But no cake for the anniversary?

“I’m gonna save that for after the win.”