No bad blood, Stephens says he and Edgar are a dying breed 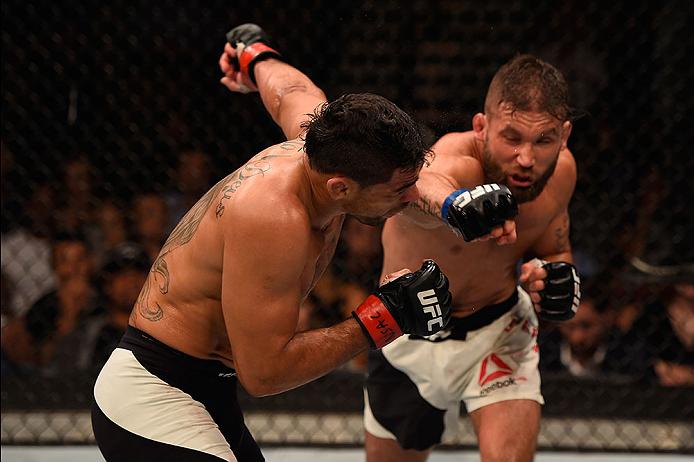 When Jeremy Stephens talks about his UFC 205 opponent, Frankie Edgar, there is no shortage of respect given. In fact, when the Iowan gives his thoughts on the former UFC lightweight champion, it’s almost hard to believe that the two will be trying to knock each other out in Madison Square Garden on November 12.

“Frankie’s a true champion,” Stephens said. “He hasn’t been broken, he’s hard to rattle, he hasn’t been knocked out, and he doesn’t run away from fights like other people in the division. He’s a real true, born and bred fighter, and that’s why I respect him and why I train hard for fights like this.”

In other words, he can have no problem fighting Edgar because they’re mirror images when it comes to mindset.

“We’re a dying breed,” Stephens said, and he’s right. There will be no Twitter wars on the way to New York City, no shoves at the press conference or weigh-in, no denigrating of each other’s accomplishments. Like the MMA version of Arturo Gatti and Micky Ward, Edgar and Stephens will show up to the Garden, fight like bitter enemies, then shake hands at the end.

“I know Frankie comes from back in the day, where he fought bare knuckle,” he said. “I come from the Toad Holler days in that same era. And that symbolized real fighters. There are only a select few guys out there that are real fighters, like the Diaz brothers, Frankie Edgar and me, and everything we have, it’s all from our hands, feet and chin, and we’ve dedicated our life to this sport. Nowadays, it’s more about athleticism, trash talk and entertainment. But

we’re still some of the realest, bite down on your mouthpiece, hard-working dudes out there and we’re still showing these athletes, yeah, you may be able to talk trash and do all that, but that’s why you avoid guys like us.”

Maybe it’s in the blood, or something in the water in Stephens’ Iowa or Edgar’s New Jersey, but more accurately, it’s probably because the two fight for similar things – to be a champion and to take care of their family. For Stephens, a father of two, providing for his daughters is the be all, end all of his transformation from family man to knockout artist on fight night. And he has no qualms about getting mean when the Octagon door closes. To him, that’s a gift.

“I’ve been through a lot of s**t and I’ve literally fought for everything that I have,” he said. “I’m fighting to put food on my daughters’ table, to get them in dance classes, further their education and put clothes on their back and a roof over their head. I’m fighting for everything that I have and it puts me in a vicious mentality where all I do is stay in the gym, grind and work my ass off because fighting is all I’ve ever known. I’ve dedicated my life to this sport and I’m still thriving off that fear of being embarrassed, that this guy can kick my ass. So I know how to harness those fears and yeah, I am trying to knock your lights out.”
Get ready for UFC 205: Fight card for Nov. 12 | Champions Alvarez, McGregor to headline historic card | Woodley-Wonderboy welterweight title clash set | Polish stars Jedrzejczyk, Kowalkiewicz perfect for NYC | Few tickets remain, buy now

Flipping that switch has been easy for the 30-year-old throughout a pro MMA career that began when he was a teenager. But is it confusing for his girls, aged five and seven, to see the father they were coloring with now punching someone in the face on fight night?

“They see that, and they don’t really ask – they’re just happy that dad won,” he said. “They accept it for what it is – my dad goes in there and fights, and it is what it is. They’ve also seen me lose, and I explain that it’s just like riding a bike. You’re gonna fall down but you’ve got to get back up and ride it. You may not know something now, but if you keep attacking it, you’re gonna get better at it and eventually you’re going to conquer it. I try to be as real as I can be with them, and if you’re not, you’re kind of putting them in Disneyland and Disneyland ain’t good in reality.”

Coming up the hard way in the Midwest gave Stephens a dose of reality that his daughters have been fortunate to never see in southern California. There, it’s sunshine, training, and family.

“They train with me in the gym, they do jiu-jitsu and striking classes and they see me put in work,” he said. “I’ll take them with me to the beach and go run and they’re with us 24/7 and I’m glad. It’s cool to be a part of my kids’ life and they’re very aware of what I do, they love it, they embrace it, and they’ll tell people, ‘You know my dad’s the great Jeremy Stephens?’”

He laughs, but on November 12, the proud papa turns into the “Lil’ Heathen,” and then it’s a whole different story.

“This is what they’re paying me to do,” he said of his no nonsense fighting style. “I’m not going to stop until they pull me off of you. I’ve never disrespected any fighter, and when the ref pulls me off, I’m off of you, but you’ll know you’re in a dogfight, and I’m going to attack you and do anything I have to do to get that win because of what I’m fighting for.”