No Additional Motivation Needed for Collard 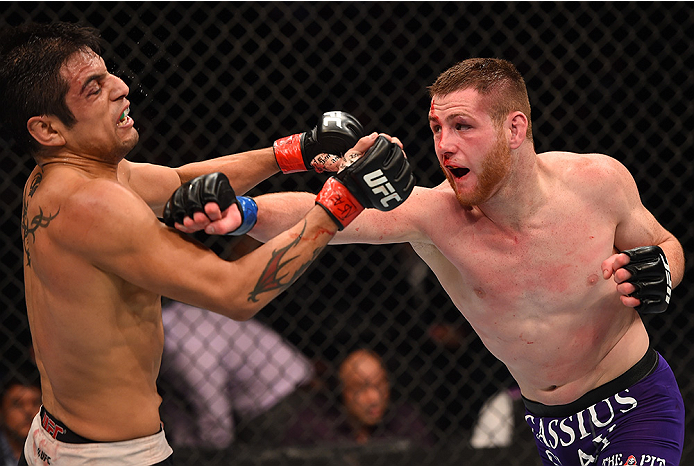 It’s no secret that mixed martial arts is an ever-evolving landscape. In the brief, but rich, history of the sport, everything from fighting styles to preparation has seen a once effective method give way to something more versatile and refined. And just as single-disciplined attacks inside the Octagon have become a thing of the past, so have the days of arriving to compete at the biggest stage in the sport unprepared.

Where amateur scenes were just ramping up a decade back, the current crop of fighters filling the UFC roster not only came to the promotion with a handful of bouts to their record before turning professional, but then had a thriving regional scene to jump out and compete upon.

Although it would be impossible for the smaller circuits to duplicate the feel and chaos of stepping into the Octagon for the first time, having put it all on the line in front of several thousand fans is something most athletes in the UFC ranks experienced before ever hitting the big show.

That was certainly the case for Clay Collard. The 22-year-old featherweight already had 15 professional fights on the Utah regional circuit when he received the call every up-and-coming fighter dreams of. “Cassius” would go on to face surging 145-pound talent Max Holloway in his UFC debut in August of 2014, and even though he’d take a loss that night in Tulsa, just making it to the premier stage in MMA was a dream come true for The Pit Elevated representative.

“I’ve wanted to fight in the UFC since I was 12 years old,” Collard said. “Being able to travel and see the world while getting to do something I love is just a dream come true.

“I have been wrestling since I was six and boxing since I was 10,” he added. “I was 18 years old in high school and didn’t have a clue what I was going to do with my life. My wrestling coach told me about a fight that was taking place a week after my birthday and he suggested I do it. I jumped on the opportunity and I’ve been in love with the sport ever since.”

While the Payson native would notch his first UFC victory in his next fight against Alex White, he once again found himself on the business end of things in his next outing against Gabriel Benitez at UFC 188 in Mexico City back in June. Collard came into the tilt hoping to continue building momentum, but Benitez proved to be the better man inside the Octagon, as took the bout unanimously on the judges’ scorecards.

Yet, rather than sulk about suffering his second setback in three fights and casting doubt on his ability to compete at the highest level of the sport, the hard-nosed former wrestler and boxer pushed the negativity aside and immediately resumed his hustle toward improvement.

“I had a lot of things going on in my personal life and I wasn’t really focused for my last fight,” Collard said. “I wasn’t as focused as I should have been. Just having that loss now on my record, and losing to a guy I believe I’m better than really kind of bugs me. With this next fight I went and spent some time with my family and got refocused and back to why I fell in love with this sport in the first place. As soon as I found out I had this next fight booked I started training immediately and put my nose to the grindstone.

“I believe every time a person fights it’s a reflection of who they are, and I definitely wasn’t happy with my last performance. I’m way more focused coming into this fight and hungry for a win.”

His next opportunity was originally slated to come against Team Alpha Male staple Andre Fili, but an injury forced the scrappy featherweight out of the bout. The UFC then tapped Tiago Trator to step in, and the two fighters will look to handle their business at UFC 191 this Saturday night in Las Vegas. Even though having opponents drop in and out of fights is a common turn at the highest level of mixed martial arts, the twists and turns in preparation can be a difficult circumstance to deal with for a young fighter who is attempting to establish his footing in the featherweight fold. Nevertheless, Collard simply saw the change of opposition as one more detail on his road to Las Vegas, and he believes he will emerge victorious against his Brazilian foe when the smoke clears at UFC 191.

“I just want to be able to get as many fights in as I can,” Collard said. “That’s how I’m going to build the experience I need. I kept my focus through the change of opponent. It doesn’t matter who I fight…I’m going to be ready. I feel when I’m focused I’m one of the hardest working, most self-driven people out there. I like to work hard and I strive to be the best.”