In Her Move Up To Flyweight, Nina Nunes Heads Into UFC Fight Night: Vera vs Cruz Feeling Better Than Ever
By Zac Pacleb, on Twitter @ZacPacleb • Aug. 10, 2022

Call it determination or call it stubbornness, but nothing could deter Nina Nunes from fighting Mackenzie Dern just six-and-a-half months after giving birth to her and wife Amanda Nunes’ daughter, Raegan, but that decision came with its fair share of struggles beyond the struggles newly minted parents experience.

After birth, Nunes had to return to the hospital on two occasions because of infections. A month out from the bout, she had kidney stones and had a stent inserted. The week of the fight, she experienced kidney stones again and required medication. And yet, for better or worse, she still competed.

The accomplishment was valiant and rightly praised, but Nunes struggled against the jiu jitsu ace, tapping out late in the first frame. 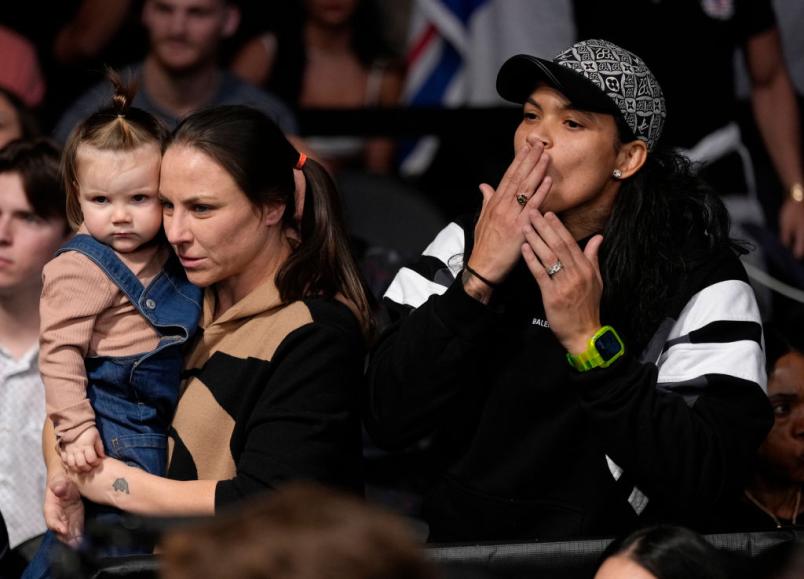 “I went into the fight feeling, ‘Oh, you’re supposed to go through all this hard stuff.’ And it’s like, ‘No, you’re not.’ Sometimes, it takes something like that to slap you in the face to be like, ‘I know you’re tough, but you gotta listen to your body, as well.’ After that, I sat down, I had Amanda telling me, ‘You shouldn’t have done it.’ It’s hard to listen to your partner.

“We kind of sat down and realized we need to take this more as a professional sport. It’s not just about being tough anymore. It’s a business, and things have gotten easier since we looked at it this way.”

Losses offering lessons and hindsight providing perspective is cliché (so is ignoring your partner’s advice, honestly), but Nunes freely admits she made the wrong choice fighting in April 2021.

“I shouldn’t have been there,” Nunes said. “I was excited to get back because I’d just had the baby, and sitting on the sidelines watching Amanda do her thing, I just kind of got bored. But this time, I took care of my body. I’m 100 percent.”

More than a year later, Nunes is flying into her flyweight debut against Cynthia Calvillo at UFC Fight Night: Vera vs Cruz. 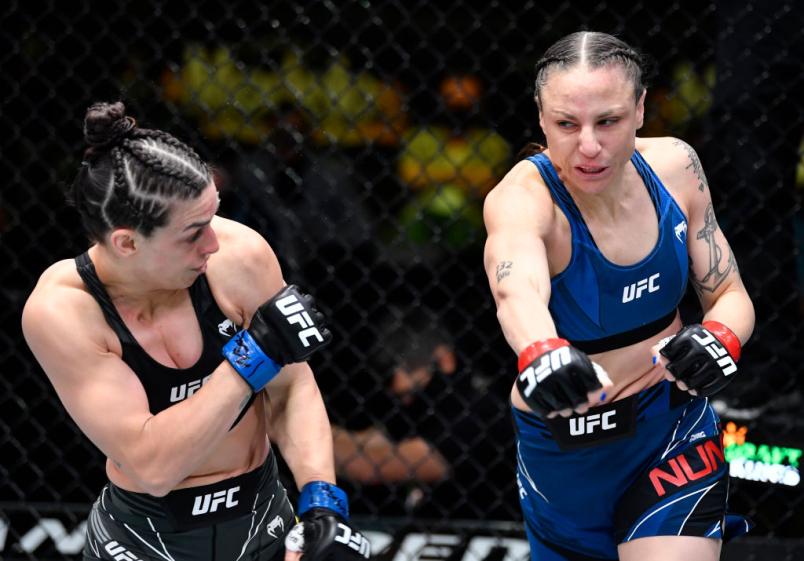 The move up to 125 is one that Nunes said should have happened when the UFC opened the division up in late-2017. Her investment into the strawweight division was too much to give up, though, especially after she went on a four-fight win streak in 2017 and 2018. No longer worried about cutting down to 115, Nunes said she was reminded what it’s like to actually enjoy a fight camp and look forward to fight night rather than first counting down the days to official weigh-ins.

Nunes now feels the power and speed replenished at this weight, and, combined with Raegan now sleeping through the night, she just feels happier and healthier.

Part of that “happier” includes a new weekly tradition throughout camp.

“Every Friday, I get Crumbl cookies,” Nunes said. “I’ve never done that before. The thing I looked forward to at the end of every week was, ‘I get to have a cookie today.’ At 115, it was miserable. I was scared to go anywhere, scared to travel, scared to leave the house because I had to know exactly what I was eating. I didn’t want to eat out. I didn’t eat horrible to make 125 because some people make that mistake and then they miss weight at the class they go up in. I was just happier. I was able to go out to dinner and not be like, ‘Oh my God, am I going to have to go home and run for 30 minutes?’”

On top of a generally improved mood, Nunes is excited to face fellow ex-strawweight Cynthia Calvillo, who made the move up in June 2020. Although Calvillo earned a main event victory over Jessica Eye in her return to 125, she subsequently dropped three in a row to Katlyn Chookagian, Jéssica Andrade and Andrea Lee.

Even so, the matchup is appealing to Nunes, who doesn’t expect Calvillo to just rely on her potential grappling advantages.

“(Calvillo) likes to fight,” Nunes said. “It’s not like the, ‘Oh, I’m just going to do this one thing.’ She’ll stand with me. She’ll probably want to take me down, as well, but she’s a fighter. She goes in there with that, ‘Let’s get into a fight’ kind of feeling, and I feel like I haven’t been like that in a while. I feel like I’ve kind of gone in there and just been like, ‘Oh, let’s be technical. Let’s score.’ I’m getting into a fight this time, and she’s the perfect person for that. She’s a good opponent for me.”

She went on to admit she had previously gotten too in her head about her opponents’ grappling skills in the past, citing Gadelha and Tatiana Suarez as cases in which she was “too caught up” in defense rather than expressing her own skills.

As August 13 approaches, all seems good on the Nunes front. Amanda reclaimed her bantamweight title vs  Julianna Peña July 30 in Dallas at UFC 277, making her the first fighter to reclaim double champ status.  Next is Nina’s fight, and she is fully intent on imposing her will after a training camp focused on her and her well-being.

“I practiced what I was strong at,” she said. “Of course, I’m aware of what she’s strong at, but I didn’t dwell on it much. I worked on everything. I’m a mixed martial artist. I’ve been doing this for years, and I just need to remember that.”