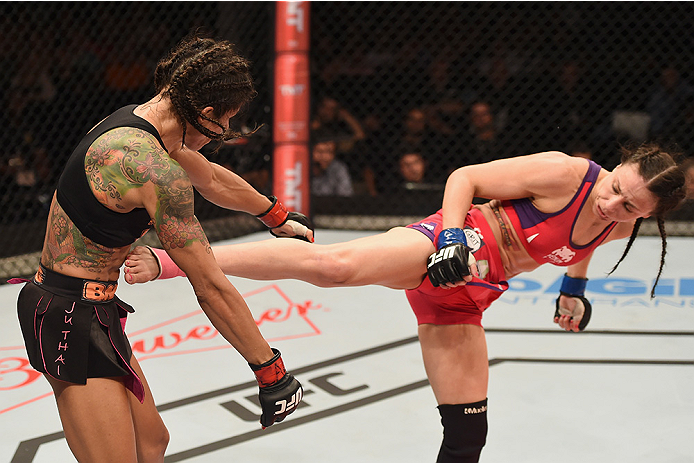 Nina Ansaroff was not happy with her UFC debut last November. After years of struggling on the local circuit, she finally had her chance to show the world what she was made of, but dropped a disappointing unanimous decision to Juliana Lima in Uberlandia, Brazil.

The Florida native is counting on erasing that memory for herself and her fans when she faces TUF 20 finalist Rose Namajumas at UFC 187: Johnson vs Cormier on Saturday.

“I’m in a way better spot mentally, physically and training-wise than I was for my last fight,” Ansaroff says. “That was my UFC debut, and my first time at 115 pounds so it was a hard process for me, so now I’m feeling like this is going to be my real UFC debut.”

Ansaroff has been training in Florida since 2008, and although she took off on a four-year journey of self-discovery, she’s back at home where she says she needs to be, in order to compete at her full potential.

“I moved around a bit because my mind wasn’t really where it needed to be, but now that I’m back I feel great,” The American Top Team standout said. “I love being in Miami and near my family and it makes me a better fighter when I am here.”

Family is important to Nina and she credits hers with believing in her even more than she believed in herself.

“I was working as a nanny for my sister,” she said. “It was really just to help me out, so I can continue trying to make a run at being a professional fighter, and I’ll be honest with you, for a while there I didn’t believe women’s MMA would ever make it to the point where I could actually make a living fighting.”

Like most mixed martial artists, Ansaroff started taking martial arts classes at a very young age. In her case it was the Korean style of Taekwondo, which focuses much of its technique on kicking. She thrived at the art, and looked up to kickboxers as her role models, but her father, a first generation Macedonian – was a professional soccer player in Europe, and the family had other ideas for Nina.

“I never thought of fighting as something I wanted to do professionally,” she said. “Everybody just thought I would play soccer professionally like my father did, but after high school I just got burned out. I had a motorcycle accident and gained a lot of weight during rehab so I took up mixed martial arts as exercise, and I here I am, getting ready face one of the biggest names in women’s MMA.”

Indeed, despite having less experience than Ansaroff, Namajunas is one of the biggest names in women’s mixed martial arts. And while becoming a finalist on The Ultimate Fighter and possessing an oversized personality helps in the marketing department, Nina believes she knows which path to stardom she’ll take.

“Stopping Rose will be the soundest way to put myself out there,” she said. “Rose built a name for herself while I was busy just trying to book fights. She had Invicta and the TUF show, plus being Pat Barry’s girlfriend and all the fun they have on Twitter has really put her name out there. But people who know me know what I’m capable of doing, and the best way for everyone else to get to know me is by beating Rose, preferably by finishing her.”

One of her coaches, Marcos Da Matta, believes she has all the right tools to get that finish.

“I think she’s going to crush her,” the Brazilian jiu-jitsu professor and former champion says. “I don’t see Rose beating her anywhere. Nina’s wrestling is amazing. Rose has great jiu-jitsu so she’s dangerous on the ground, but in my opinion at 115 pounds, there is no one who hits harder than Nina.”

With four TKOs in six wins to corroborate the sentiment, Ansaroff also comes into this fight with the knowledge that she’s been in deep waters before, and is confident in her ability to stay afloat.

“Early in my career I faced some really tough competition that I wasn’t quite supposed to be ready for, and I held my own pretty well,” she said, referring to bouts with current Invicta champion Barb Honchak and former UFC strawweight champ Carla Esparza, whom Nina lost a close split decision against in 2010.

“I don’t really have any game plan for Rose,” she said. “I have enough experience in MMA that I don’t really go into a fight with specific things in mind. I train to be a well-rounded mixed martial artist, and I am confident that I will win the exchanges. Whatever she’s good at, I am going to try to do just a little better.”