UFC Welterweight Niko Price Has A Lot In Common With Alex Oliveira, But That Won't Stop Him From Trying To Take Him Out In The Octagon On Saturday
By By Maddyn Johnstone-Thomas • Oct. 1, 2021

Niko Price feels that he and Alex Oliveira have a lot in common…especially when it comes to how many kids they each have. When Price, who is about to become a father for the sixth time, was asked what he thought of his opponent, his response was quite simple.

“He’s awesome,” Price said. “He has 11 kids, so we’re sitting up there in the high kid area. We’re both fighting for a lot, and it is going to be action-packed and awesome.”

There’s no doubt that Price’s welterweight bout with Oliveira at UFC Fight Night: Santos vs Walker will be an exciting one to watch. The 31-year-old always brings the action to the Octagon and has some of the craziest finishes in the UFC.

Yet for the first time in his career, Price went to the judges’ scorecards in back-to-back fights, and it has been almost exactly two years since he has had a victory. “The Hybrid” has registered 10 wins by knockout and three by submission and his mindset to end a fight in less than 15 minutes is the same heading into this weekend.

“Get it done. Finish. No more judges,” Price told UFC.com “No more worrying about what the refs do and what they don’t see. I’m coming in there to get my dub, simple as that. It won’t be going 15 minutes.”

Entering this camp, the welterweight made changes in training, keeping the same number of sessions, but making them more intense.

"We're both savages so this is just going to be a savage war."@NikoHybridPrice tells us why he's thrilled to compete against Alex Oliveira at #UFCVegas38 🔊⬆️ pic.twitter.com/sai6CJU1SP

Price is addicted to training again and it stems from the changes he has made inside and outside of the Octagon.

The fighter that will be standing across from Price is a veteran in the UFC. Brazil’s “Cowboy” will make his 21st walk to the Octagon on Saturday, after making his debut back in 2015. Just like Price, Oliveira brings an exciting energy to fights, with 12 wins by knockout and five by submission. 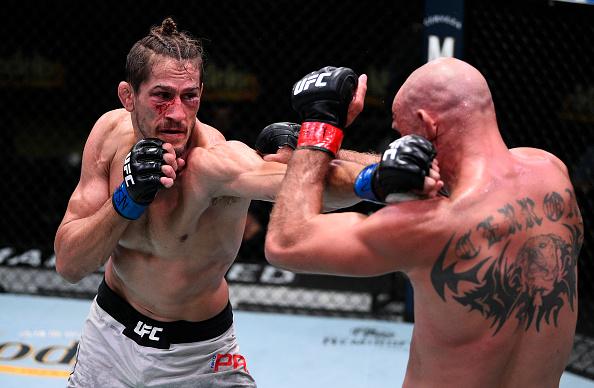 The fighters have seven Performance of the Night bonuses combined and Oliveira has earned Fight of the Night twice in his career. It will be a battle to see who can get the finish first.

“I have to be ready everywhere,” Price said. “We’re both the type of dudes that can finish you from any position, on the ground, standing up, in between with knees, elbows. We’re both savages. It’s just going to be a savage war. I wouldn’t be surprised if there is blood, put it that way. I would be more surprised if there isn’t.

Heading into this weekend, Price feels blessings all around after he recently announced that he will be expecting his sixth child, alongside signing a new contract in the UFC. 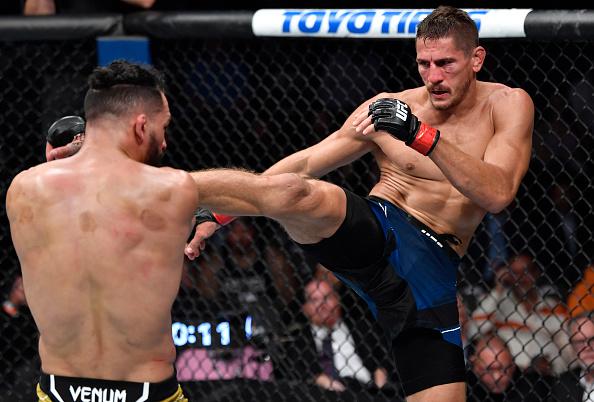 Niko Price kicks Michel Pereira of Brazil in their welterweight fight during the UFC 264 event at T-Mobile Arena on July 10, 2021 in Las Vegas, Nevada. (Photo by Jeff Bottari/Zuffa LLC)

He has earned 10 first-round finishes through his career and doesn’t plan on stopping. Price is eager to win by finish in all four of the fights on his new contract, and while he isn’t worried about any fights beside the one this weekend, he does have something sitting on his radar.

“I’m looking for a Diaz fight, I think that would be so fun,” Price said. “I think me and those guys would have some crazy battles, but I’m not worried about that until after Saturday.”