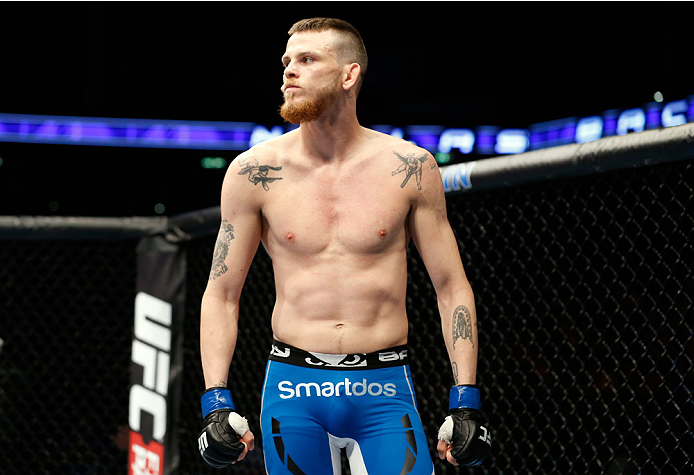 On a week with two UFC events, both with several rising stars filling each card, a lot of the spotlight is shining directly on Sweden’s Niklas Backstrom, who competes in his second Octagon bout this Saturday in Stockholm against England’s Mike Wilkinson. It’s a fairly new occurrence for the 25-year-old from Ornaset (population 3,033), but it’s not the only one.

“This feels different in a lot of ways compared to most of the fights that I’ve had,” Backstrom said. “Most of my fights have been on short notice, and I’ve been matched up to lose, and stuff like that.”

Not anymore. With Sweden suddenly joining Ireland as a hotbed for rising MMA talent, Backstrom is one of those fighters with obvious talent who will be given every opportunity to succeed. That doesn’t mean gimme fights, because there aren’t any of those at this level; but he will be in fights where he will have an ample amount of time to train and be able to put his best foot forward, which is all any fighter can ask for.

Of course, Backstrom has that mentality in him already that if there is a short notice fight against anyone, he’s the guy to call. Where does he think that comes from?

He goes on to talk about not making much money in his early days in the fight game, so taking fights whenever they were offered wasn’t to prove that he was a bad ass, but to pay the rent. Getting that rent money in on time also forced him to take a job in a mental institute for the criminally insane, though “forced” may not be the right word to describe it, since he calls that gig “the best job I ever had.”

“Before that I worked at a grocery store packing bananas and that sucked so hard,” Backstrom explains. “Of course there was a seriousness to the job, but I was not too worried about getting jumped by people. I fight every day and I fight against people who know how to fight, so I was never worried. I played cards with the guys there and I was super nice. Some people, when they work in a place like that, they have to point their chest out and walk around like they’re tough because they don’t want to get jumped. Me, I didn’t even think about it. I just walked around, joking with the guys over there, and I think I was really liked by the patients and my work colleagues because I had a really relaxed attitude.”

All these little vignettes explain a lot about who Backstrom is as a fighter. Unbeaten in nine fights, with eight victories, Backstrom is an aggressive attacker who is always looking for the finish, and more often than not, he gets his wish. This earned him rave reviews on the European scene, but it wasn’t until he stepped in on short notice (how appropriate) to face Tom Niinimaki in May, and proceeded to submit the veteran in less than a round. It was a spectacular debut to say the least, but it was his mix of aggression and calm that impressed the most.

But don’t call him a natural, as he has been working at this since he was a child, when he saw his first fight. By the age of 10, he was training with his brothers in their home. Well, he calls it training, but a particular form of it not found in most dojos.

“I started training with my brothers in my room with instructional tapes and stuff like that, but it was mostly torture training,” Backstrom laughs. “They were just taking side control on me and elbowing me in the stomach because they were six and nine years older than me and they were a lot bigger. So I just got tortured.”

That will make you either get tough or quit, and the Backstrom boys don’t quit, a trait learned from their father, a hockey coach who expected that Niklas would hit the ice, not opponents.

“I was playing a lot of hockey because I come from a hockey family,” Backstrom said. “My father was our hometown team’s coach and the only time my hometown won the Swedish championship, my dad was coach for the team. So I was pretty much brought up to be a hockey player. But I just wanted to learn how to fight. I always found it fascinating, and my brothers loved the sport. They were watching PRIDE and UFC from the beginning, and my cousins were all doing jiu-jitsu and training.”

You know what that means – family wrestling tournaments.

“We kind of stopped when I started winning them all because I’m the youngest,” he laughs. “We all loved the martial arts, but my interest switched over from hockey to fighting. I don’t know why, but I really enjoyed the sport.”

By 2009, he was making his pro MMA debut in a sport that was still very mysterious in his home country. He at least had one fan in his father, who didn’t blow a gasket because his son didn’t continue in hockey. And given dad’s reputation when he had the skates on, that’s not surprising.

“My father was a little bit of a hockey fighter,” Backstrom said. “There’s a lot of newspaper clippings from back in the day with pictures of him fighting. (Laughs) The main thing for him is that I’m a hard-working guy and there are a lot worse things you can do as a young kid than to go into a cage and fight. I think he thinks it’s pretty cool, and I know he’s very proud of me.”

He should be. Backstrom has had great success in his career thus far, and it looks like things are only going to get bigger for the featherweight prospect in the coming months and years. Sweden has gotten on board with MMA as well, setting the stage for the type of explosion that will take things to a new level for the sport and its athletes. For those there in the sport’s dark ages like Backstrom, that’s a welcome development.

“We’ve got a bunch more guys (coming from Sweden) that I spar with and in other weight classes, and they are definitely the future,” he said. “I don’t know why it is, but Sweden is really good at this sport. We don’t really get into something half-heartedly. We do it a hundred percent if we do it. And I noticed how big it’s gotten in Sweden, because when I started, nobody knew what it was. They thought it was a bloodsport, and I remember the papers saying it was a deathmatch. Every conversation you had with somebody above the age of 20, they thought it was human cockfighting. Nobody knew what it was, and you really had to explain for a long time what you did. But nowadays everybody knows about (light heavyweight contender and teammate) Alex (Gustafsson) and knows about the sport. I’ve really seen a difference here.”

The difference for Niklas Backstrom on a personal level is only beginning, but he insists that if he truly is the Next Big Thing out of Sweden, it won’t change him.

“I consider myself to be someone who doesn’t really like cameras and stuff outside of the ring, but I’m getting more used to it,” he said. “It’s part of the job, you have to do it, but it’s not like ‘oh, tomorrow there’s a camera coming, I have to put more gel in my hair,’ like some people, and then walk around with a tank top. (Laughs) That’s not me and it’s never gonna be me. I’m from a small town in northern Sweden, and it’s a lot different there.”