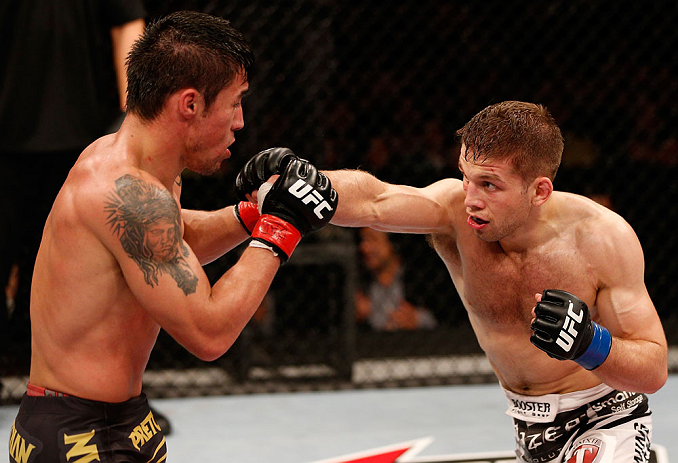 Back when he was fighting anyone and everyone from welterweight to light heavyweight, competing in shows sub-titled the “Throwdown at the T-Bar,” “The Myth in Maplewood,” and sometimes just “Brutal,” Nik Lentz wasn’t exactly putting all his eggs in one basket when it came to a professional fighting career. In fact, the former University of Minnesota wrestler wasn’t putting any of his eggs in that basket.

“When I started fighting, it was never a plan to be a professional fighter; I just started getting into it,” said Lentz, who turned pro in 2005. “And whoever they said fight, I would fight. I was just trying to get experience.”

He got it, and as the years, the wins, and a few losses piled up, he realized he had developed into a pro fighter, one with the potential to make some noise in the UFC. The only thing was, it wasn’t going to be in the division in which he went 5-2-1 (1 NC) in the Octagon. So Lentz did what a lot of fighters did, moving to a new weight class. For him the drop was from 155 pounds to the 145-pound featherweight division, but losing 10 pounds wasn’t going to be enough. He had to change everything.

“To get to 145 pounds I had to get a nutritionist, to be strong enough at 145 pounds I had to get a strength trainer, to progress as a fighter, I had to move camps,” he explains. “So in the process of making 145 I had to re-evaluate and redo pretty much my whole life. And in that process, that’s what made me a better fighter. When I look back and see what I did at ’55 and even before that when I fought at ’70 and at 205 a couple times when I was younger, I’m disappointed in myself because I see how much I wasn’t doing and how wrong I was doing things. I was working really hard, but I wasn’t really doing anything right.”

His success while not “doing anything right” is a testament to Lentz’ talent, his work ethic, and a grinding style that made life miserable for those tasked to spend 15 minutes in the Octagon with him. Grabbing a few wins here and there in the biggest show in the world wasn’t enough for him though, and when asked why he decided to make the move, the answer is as succinct as you can get.

“I can make a serious run at the title.”

But first, he had to pack his bags, moving from Minnesota to south Florida to work with American Top Team.

“It snowed last week in Minnesota, so it is a lot different,” said Lentz in a recent interview. “It is a little bit of a culture shock as well. Minnesota is more of a Midwest place where everyone is kind of ‘Minnesota nice.’ They’re all very polite, and even if they do get angry with you, everyone keeps it to themselves. Florida people are a little more aggressive. I’ve gotten used to it, but they’re definitely a little more aggressive. The weather here is nice too, but the thing I don’t like is that the temperature changes. I get really cold here because it’s like a thousand degrees outside and then inside they have the AC blasting so it’s 60 degrees. But overall, it’s gonna be nice to train outside. I hate training in the cold; it’s just not good for you and you get injured more often, so it will be nice.”

Training with the ATT elite doesn’t hurt either, and with two wins over Eiji Mitsuoka and Diego Nunes already under his belt at 145, he believes that there’s no place to go but up as he prepares for a Saturday bout in Brazil against Hacran Dias.

“I’ve been through the ups and downs, I’ve made the mistakes, I’ve done all the things and I’ve learned it the hard way,” said Lentz, 25-5-2 with 1 NC. “Learning stuff the hard way and going through everything has just made me into a better and much stronger person in every aspect of life, but especially fighting.”

At this level, being successful often comes down to what you do in those other aspects of life. Everyone here can fight; can you manage your life outside the Octagon as well as you do the one inside it? Lentz, who just sold his house in Minnesota and is in the process of shopping for a new one with his wife, knows how difficult it can be to juggle both lives.

“It’s really hard, and actually early in my career I messed that up,” he admits. “I let my personal life get in the way of training and stuff. Not for a while, but it’s happened and it had terrible consequences. The good thing is that I’m married now, I have a wife, and when it comes to fight camp time, I forget about everything and I just train for the fight because my wife is really good about keeping up with the rest of our life.”

Which leaves him with only one thing on his mind, and that’s Brazil’s Dias, a member of the renowned Nova Uniao team who hasn’t lost in nine fights dating back to 2009. Lentz is respectful of his foe, but not to the point that he’ll be reluctant to punch him in the face come fight night.

“He’s a very talented guy,” said Lentz of Dias. “He’s the same age as me, but I feel like careerwise he’s a lot younger and I feel like he hasn’t been tested like he’s going to be when he fights me. He’s got a good record, he’s a very talented fighter, but he hasn’t been in anywhere near the battles or fought the caliber of people I have, and he’s gonna be in for an awakening when he steps in there. He’s gonna be stepping into a top ten fight and he’s gonna realize fast that it was a mistake.”

That confidence doesn’t come with being able to pull off flying armbars, win 20 straight fights without a loss, or knock opponents out with a single blow. It comes after you’ve struggled, after you’ve doubted, and after you put that all aside and just kept moving forward. Nik Lentz has hit all the potholes and roadblocks that you can over the course of his career, yet at 28, he’s not only lived to tell about it, but he’s become a top level fighter in the process. And he’s not done.

“I feel now is my time,” he said. “I feel like I’ve put in all the work, I’ve been through the grinder, I know how everything works about this business, I’m a veteran, and I’m still young. I’m peaking right now and I’m gonna be good for at least another five years, so this is my time. Everything is right, I’m at 145 pounds, I feel better than ever, I got a new team, a new nutritionist, new strength coaches, my fighting skills have gone through the roof, and people haven’t noticed yet, but they’re going to.”