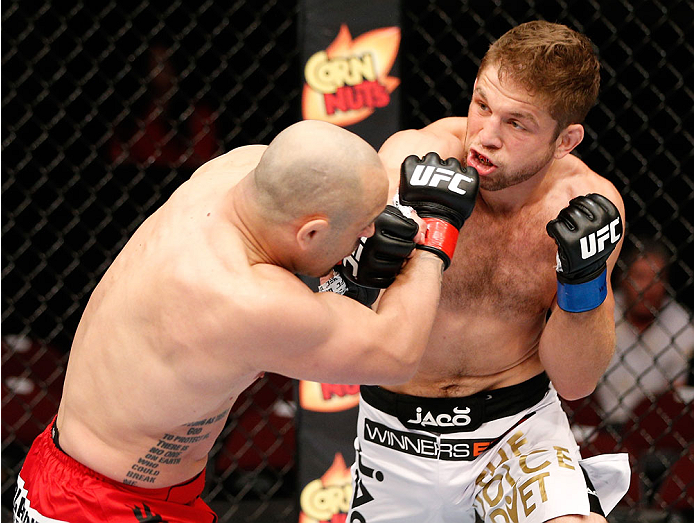 It’s simple; Nik Lentz is better than he was before. A lot better.

In 2012, the former NCAA Division I wrestler for the University of Minnesota put his UFC lightweight record of 5-2-1, 1NC behind him and he dropped the 10 pounds to compete at featherweight. On top of that, Lentz relocated to South Florida to join American Top Team.

Those two decisions have made Lentz, in his own estimation, at least three or four times the fighter he was previously, and it’s only now that “The Carny” has the confidence to show it inside the Octagon.

Since the drop to 145 pounds, Lentz has established himself as a top ten threat by rattling off a 4-1 record inside the Octagon. Lentz’s lone loss was by decision against two-time title challenger Chad Mendes, a bout which he admits he wasn’t fully mentally prepared for. Nevertheless, the bout did prove that he should be battling the best in the world, as he easily pushed Mendes harder than any other fighter he’s faced in the UFC not named Jose Aldo.

Last May, the 30-year-old rebounded nicely by netting a unanimous decision win of his own over former Ultimate Fighter 5 finalist Manny Gamburyan. Whether it was strikes at distance, strikes in the clinch, leg kicks, knees or takedowns, Lentz was dishing them out in droves against his veteran opponent.

“I always have respect for my opponents, I always study them hard and I always make sure to know what they’re good at,” Lentz said. “Manny has been around a long time and he’s fought some of the toughest guys in the world. I knew he would be a tough fight. At the same time, I knew that he didn’t pose any real threats to me. Once I established what he was good at, I knew I was going to pick him apart and I did. It’s pretty straightforward, pretty simple - I beat him up wherever we fought. Overall I think the fight showed the progression of Nik Lentz pretty well.”

Since that win at UFC Fight Night: Brown vs. Silva, Lentz has been linked to two bouts that really excited him, but his opponents have had trouble finding their way into the Octagon. Originally, Lentz was set to take on Charles Oliveira in September and, later, Thiago Tavares this coming weekend, but these opponents withdrew before they got to touch gloves. Both fights would have been featherweight rematches from previous lightweight battles that had mercurial endings.

Lentz believes the contrast between him at 145 pounds vs. him at 155 pounds against these past foes would have been profound, and that’s why he’s not surprised the fights never materialized. “If you fight me one time, you realize I’m not quitting,” he said. “I’m always going to be in your face. Regardless of how the fight goes, it’s going to be one of the hardest fights of your life. I don’t think people want to sign up for that twice.”

Up next, Lentz will enter the Octagon at UFC Fight Night: Henderson vs. Thatch against Levan “The Hornet” Makashvili. Making his UFC debut, Makashvili owns a 6-1 pro record including three knockouts. The 26-year-old from Oceanside, New York is taking this fight on short notice as a replacement for the aforementioned Tavares. It will be quite a trial-by-fire situation for the newcomer, as his first Octagon appearance will be against the number eight-ranked featherweight in the world.

“I guess it’s both a good and a really bad day for him,” Lentz said. “He just got signed to the UFC, which I’m sure is good for him, but it’s a bad deal for him because he has to fight me. That’s a hard first fight in the UFC, that’s for sure. I mean I’m not going to look past him. I’m not going to run across the ring and act like the kid can’t fight or anything. I’m going to take my time and dismantle the guy and put him in positions he’s never been in, showing him why he shouldn’t be fighting me. Good on the dude for stepping up because the UFC went through all the rest of the 145ers and they said ‘no.’”

This Saturday, the supreme confidence The Carny knows he is ready to wield inside the Octagon comes from a singular place: American Top Team. From the coaches to the training partners, Lentz has the right people helping him grow and he’s ready to shock the world.

“I can go into ATT every day and I have a plethora of coaches who can teach me something new,” Lentz said. “I can go into ATT right now and my wrestling coach Kami Barzini, he’s still a better wrestler than me and he still knows more about wrestling than I do. He can still teach me something every day for many years to come. My striking coach Roger Krahl, he’s still a better striker than me. He still knows more about this game and he can show me and teach me new things every day. That’s what makes me so much better now. Now, Nik Lentz knows he’s number one. And I’m going to prove it.”