Nik Lentz Is A New Man

A realignment of priorities is paying dividends for Nik Lentz.
By E. Spencer Kyte • May. 13, 2019

If you thumb through Nik Lentz’ Instagram page, the eighth image in his array is a fan-made fight poster announcing his trilogy bout with Charles Oliveira this weekend in Rochester, New York.

Above the myriad hashtags affixed to the post is a message from the 34-year-old lightweight, who enters the contest on a two-fight winning streak. It reads, “I’ve been telling everyone… I’m a new person. New faith, new father, new man. I get a chance to prove it.”

A cynical person would say it’s a personal spin on the same old pre-fight promises of being in the best shape ever, training camp going perfectly and feeling ready to take on all comers, but to hear Lentz chronicle the twists and turns and milestone moments that led him to this point in his life, you come to understand that the unflinchingly honest and refreshingly open veteran really is in a different place.

All it took for him to get here was to stop caring about fighting so damn much. 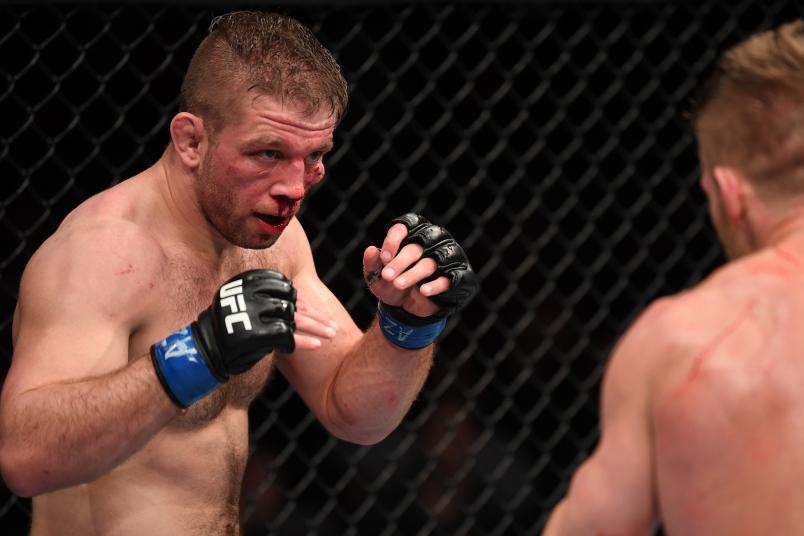 “I’m very good at working,” says Lentz, who grew up wrestling and has logged 42 trips into the cage over the last 13 years and change. “I’m almost too good at it, because the rest of my life takes a back seat sometimes and that can lead to bad things.”

That’s the short version of how Lentz found himself sitting on a plane headed for Brazil, just a few days away from facing Oliveira for a second time, pondering retirement.

While his move to the 145-pound weight class started well, making the weight became a constant struggle and left him in a permanent bad mood, which caused stress in his personal life, including his marriage.

Following that fight with Oliveira, Lentz returned to the lightweight ranks and the win column, registering back-to-back victories over Danny Castillo and Michael McBride. But as things were coming together professionally, he and his wife dealt with trauma at home that once again knocked the lightweight veteran for a loop.

“We got pregnant and we ended up losing that kid and that put a rift in our marriage,” he begins. “My whole life kind of went to hell from there and when I tried to get it back together, it just never came back together right. I never got the same motivation and my marriage wasn’t as good.

“Life wasn’t good and nothing was going to make it good and we went through years of that. I did okay in fighting, but it wasn’t until she got pregnant again and we had our first child that it kind of snapped me out of that rut I had gotten into.” 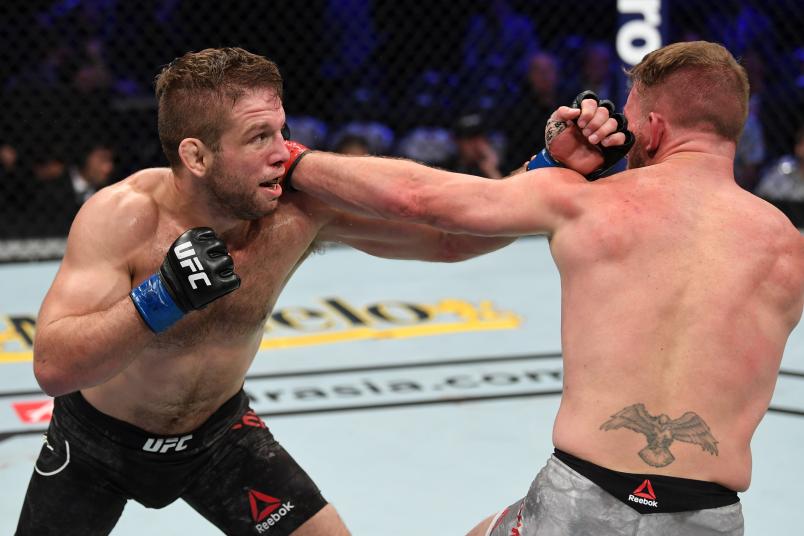 Lysanna Lentz was born on December 9, 2016 and, according to her father, it was also the day he started to reorganize his priorities and become a better man.

“A lot of it was my own fault,” he says, laughing. “Because I was trying so hard to excel at this game, the rest of my life fell apart, but when we had our first kid, all of that went away. She made everything click and come back together.”

Lysanna would soon become a big sister, but it was a moment before her little sister came into the world that pushed their papa even further down the road that has carried him into his third meeting with Oliveira this weekend.

Somewhere during their surprise second pregnancy, Lentz’ wife experienced some distress and the UFC lightweight feared that she had suffered another miscarriage. In that moment, the man who had always been opposed to organized religion prayed for a miracle, asking God to care for his family and help him restructure his life.

Lavinia Lentz was born on May 21, 2018, and on that day, Lentz’ priorities shifted completely. That was the day the new life he mentioned in that April 15 Instagram post about this weekend’s bout with Oliveira really began.

“I am a new man, I have a new faith, new motivation and a new outlook on life,” he says, echoing the Instagram caption. “It wasn’t until fighting became third or fourth in my life that I became a good fighter. It was No. 1 for so long and I cared so much about it that all the rest of my life kind of fell apart and that drags on you. It wasn’t until I had my kids and solidified my marriage that I got everything together and I can only thank God for that because it’s a miracle that it happened.”

In the midst of his major life transformation, Lentz made a massive professional switch as well, abruptly severing ties with American Top Team following his loss to Islam Makhachev at UFC 208.

With Lysanna in tow, he drove to Hard Knocks 365, where Henri Hooft’s wife instantly tagged in and started caring for the little one, while Lentz walked right into a workout. He’s been training there ever since and believes the renowned striking coach and the rest of the crew at the South Florida facility have helped to transform him into a complete fighter and someone capable of making a run towards the top of the lightweight division.

“I’ve always been an unorthodox striker; I give people a lot of problems when they fight me because they get hit with stuff they don’t understand,” says Lentz. “Henri has tuned me up and fixed me and now my striking is on whole different level and now that I have that and I can fight like a technical kickboxer, all my other skills have gone through the roof as well. It’s taken the pressure out of fighting.

“I’m having a great time and that’s the piece that was missing,” he adds. “I always worked the hardest, trained the hardest, wanted it the most, but I don’t think I ever had a good time and I finally am now.” 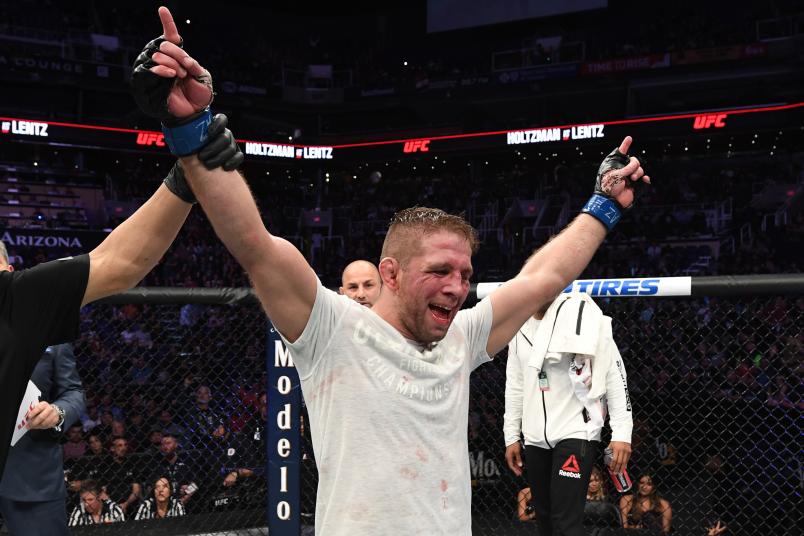 Sporting a 5-2 record since returning to lightweight and riding a two-fight winning streak, Lentz is headed to Rochester for a third meeting with Oliveira that had never really crossed his mind, at least not until two weeks before the UFC called and offered him the fight.

“Ironically, two weeks before I got the fight, I was sitting in my bedroom and I had a random thought about fighting Charles Oliveira and I was like, ‘That’s weird. That’s never going to happen. There is no reason for us to fight.’ Two weeks later, they were like, ‘Do you want to fight Charles Oliveira?’

“It wasn’t a fight I pursued or something I ever thought would happen,” says Lentz, whose first contest with the lanky, surging Brazilian ended in a no contest after Oliveira blasted him with an illegal knee early in the second round. When they finally ran it back four years later and down at featherweight, Oliveira took home the victory and the duo earned Fight of the Night honors.

“I have nothing against Charles Oliveira. The guys I fight, I don’t like them or dislike them — they’re just robots I need to beat up to make money. I did not see this fight coming, but when they offered it to me, I was like, ‘Yeah, let’s do it. I’m going to beat him this time.’”

If he does, it will register as arguably the biggest win of his career, as Oliveira enters on a four-fight winning streak, all of which have ended by submission, giving the 29-year-old veteran a UFC record 13 wins by submission and counting, two more than the legendary Royce Gracie.

Having already logged roughly 25 minutes of cage time with Oliveira, Lentz is acutely aware of what the streaking finisher brings to the table, including the unexpected strength he believes often catches opponents off-guard, creating opportunities for “Do Bronx” to catch submissions.

“You expect a rangy, lengthy kickboxer who is trying to do funky stuff off his back, but the guy is really strong and really athletic,” he says of Oliveira, who halted David Teymur’s five-fight winning streak last time out. “As long as you know that ahead of time, you can prepare for it, but the first time you grab that guy, you don’t know where that s*** comes from because he doesn’t have a muscle on his body.

“It’s a weird strength and a weird athleticism to deal with, but I know exactly what it is and what he does.” 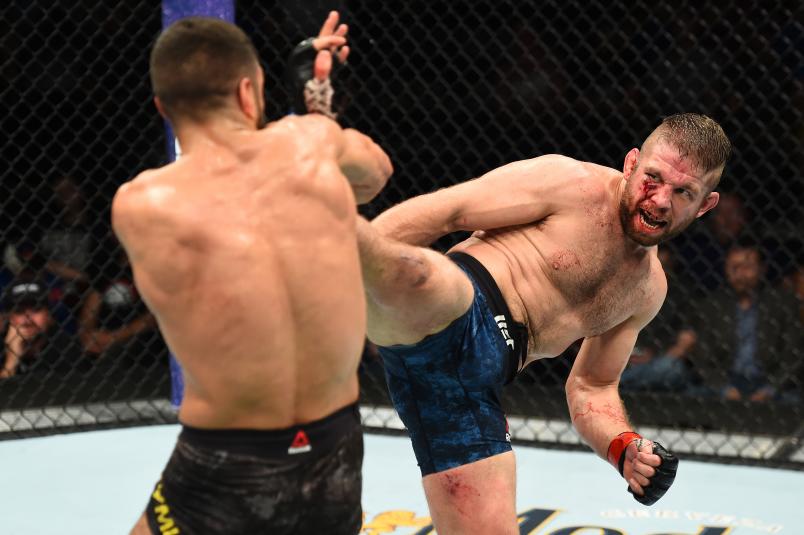 It’s that knowledge and understanding, combined with his new outlook and work with the team at Hard Knocks 365 that has Lentz brimming with confidence heading into Saturday’s crucial lightweight contest at Blue Cross Arena.

“I feel very ready, I’m very confident and although anybody can lose to Charles Oliveira, if he beats me that night, he would have to beat a miraculous human because I’m ready,” he says. “I think the holes that I had when we fought last time aren’t there anymore because I have the best striking coaches and the best wrestling coaches in the game.

“I’ve never been better than I am right now, in every way,” he adds. “That night is going to be my night. I wish him the best of luck, but the odds are against him.”

Should he emerge successful this weekend, halting Oliveira’s winning streak while extending his own run of positive results, don’t expect the man who will be making the walk to the Octagon for the 23rd time this weekend to humbly offer to fight whomever the UFC puts in front of him next time out.

“I learned a lot in this game and one of the things I learned after winning a whole bunch of fights is that winning isn’t enough — there’s more to it,” says Lentz. “I used to fight all the younger guys who were just as good as the guys in the Top 10, but when you beat them, you get no recognition.

“So after I beat Charles, I’m cutting in line because I deserve it. I’m going ahead of some of these guys and I’m going for the top. In two or three fights, we’re going to be talking about title stuff.

“I’ve been here before and fallen off the ladder, but now I’ve climbed back up and I know how to stay on top this time.”

All it took was four or five years of personal and professional struggles, switching weight classes, changing teams and learning to get out of his own way.

And if you ask Lentz, he’ll tell you without hesitation that it was all worth it.