"I do all the stuff that is needed, so when it comes down to the
conditioning battle or the ‘who is tougher’ battle - you can't win that
against me. It isn't possible.”- Nik Lentz 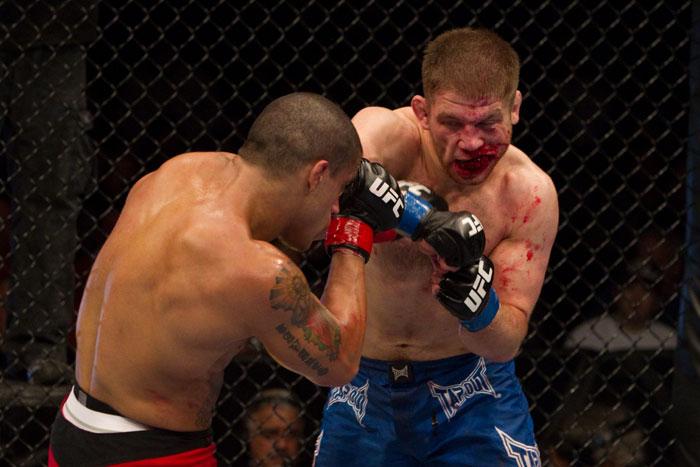 Everyone loves a comeback. Everyone loves the harrowing come from behind victory with only a few fleeting moments remaining. Historical matches like Louden Swain down by 4 points with only 27 seconds left staring down the seemingly unstoppable Brian Shute in “Vision Quest”. (Spoiler alert) It's the drama of seeing Swain, with no time on the clock and all the odds against him, get the reversal, the takedown and the pin. And the crowd goes wild.

In Seattle at UFC Fight Night 24, two lightweights came close to matching that exciting finish. Waylon Lowe played the role of the muscular Shute, who was way up on the scorecards. Playing the hero, Swain, and the eventual victor was Nik “The Carny” Lentz. With time expiring and down two rounds, Lentz grabbed a guillotine choke, pulled guard and got the tap out at 2:24 of the third. And then UFC President Dana White tweeted, “Lentz vs. Lowe was a SICK fight!!! Seattle is going crazy.”

“I'm pretty self-aware, I knew that I was losing,” said Lentz when about what he was thinking entering that last round. “It was pretty obvious I lost the first round. In the second round, he had taken me down and didn't do much, but judges score real heavily on the takedown. I knew that I was behind. Greg Nelson, my coach, is always very truthful with me and said, ‘hey, we need to get it done this round.’ So, I went out there and tried to push the pace. I tried to get him into a brawl and I knew that if I got this into a brawl, I was hurting him and he would shoot and that's what happened.”

Two things worked in the 26 year old’s favor in those final five minutes: Lowe was getting tired and Lentz’s belief in himself as a finisher. “I knew I was behind, but at the end of the second I got the takedown on him and I felt he kind of sighed.” Lentz knew that he was getting to the bigger Lowe and would look to push him even harder in the next round. “I knew if I could put the pressure on him in the third that I could finish him. I don't know if this is right or not, but if there are 10 seconds left in a fight I still think I can win it. When I'm in there I always think I can win.”

That type of unflinching confidence the Minnesota Martial Arts Academy prospect has should really come as no surprise. But there is a striking difference between Swain from “Vision Quest” and “The Carny”: Lentz is a proven winner. With an overall record of 23-3-2, Lentz hasn’t tasted defeat in four years, least of all inside the Octagon. In the shark infested waters of the UFC’s 155-pound division, “The Carny” is 5-0-1 and, currently, riding a four fight win streak. Lentz might have more in common with Shute nowadays as the hard working consummate victor.

“I feel like I'm going in the right way in the division. You just have to keep winning and beating the people they put in front of you. Truthfully, everyone in the 155-pound division in the UFC is insanely talented and insanely good. The fact that I've been able to win all my fights is good. I'm very proud of it and I'm very happy. As far as when I get to fight the bigger names doesn't matter to me because in the long run of things whether it is six months or a year or even two years, if I'm fighting for a title by then, then that's good for me. I would be very happy with that.”

Oliveira gained a name for himself quickly in the UFC with back-to-back “Submission of the Night” wins over Darren Elkins and TUF winner Efrain Escudero. “I think he's done a lot and he should be commended for doing so well and being so young, but when he fights me I'm going to expose him,” asserts Lentz, who knows how dangerous Oliveira can be, but isn’t worried because he’s faced tough competition before. “Overall, I think I have a lot more experience, I have fought a lot tougher people and I have been in more wars than he has. That's going to be one of the reasons I will win the fight.”

Another key to “The Carny” staying unbeaten in the Octagon is using Oliveira’s greatest strength against him: his jiu-jitsu. “He can be aggressive because he is fearless of the takedown.” Lentz explains that Oliveira’s over-confidence about his own ground game was his undoing when Miller took him down and kneebarred him at UFC 124. “That attitude backfired in his fight against Jim Miller. That's how Jim Miller beat him. He's so aggressive that he gets taken down and he doesn’t care, but these aren’t the days where you can just fight off your back anymore - people are too good.”

On June 26th, Lentz will look to continue his march through the UFC’s toughest division against rising star Oliveira. “Anytime I can make the fight into a very gritty and hard type fight I'm going to be the one who comes out on top.” And he isn’t looking for another pretty comeback victory, but is looking to give Oliveira his first real war in the Octagon. “I'm tough and I'm always in excellent condition. I take my training very seriously and I diet perfectly. I do all the stuff that is needed, so when it comes down to the conditioning battle or the ‘who is tougher’ battle - you can't win that against me. It isn't possible.”

And the crowd goes wild.