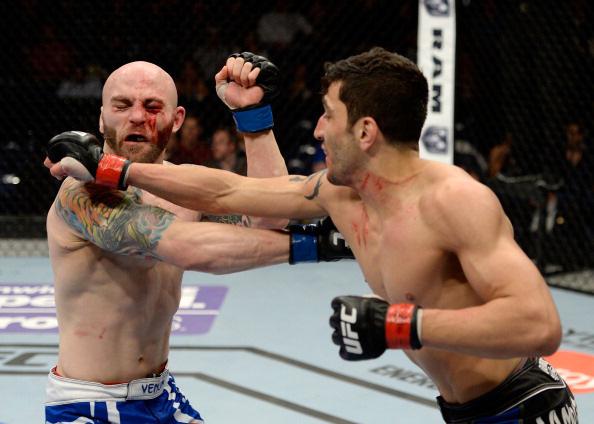 Edwards fought in spurts in the first five minutes as he chased the laterally-moving Nijem around the Octagon, but when he did, he usually found success with his strikes, particularly his left hook. Nijem was far from out of the fight though, as he gave Edwards plenty to think about with his kicks and a late leg lock attempt.

A slip during a scramble early in round two almost cost Nijem, as he was caught in a tight guillotine choke. Nijem was able to pull free after some dicey moments, and after escaping another submission attempt – this time an armbar – he was able to get back to his feet. Nijem proceeded to rock his opponent on the feet, and after they went to the mat, it was Nijem’s turn to go for the tap with a rear naked choke attempt. Edwards got loose a couple times, with the final one coming seconds before the end of the round.

Nijem got on the board first in the final round with a takedown a minute in. Edwards, now bleeding from a cut over his left eye, got back to his feet and went on the attack, again able to land with the left hook. Nijem’s strikes didn’t have the power on them that Edwards’ did, but he remained busy with his hands and feet before scoring with another takedown. Edwards got up quickly and tried for another guillotine, but Nijem pulled free easily before engaging in another leg lock battle as the fight ended.

Silverio had a good first round both standing and on the ground, tagging and then dropping 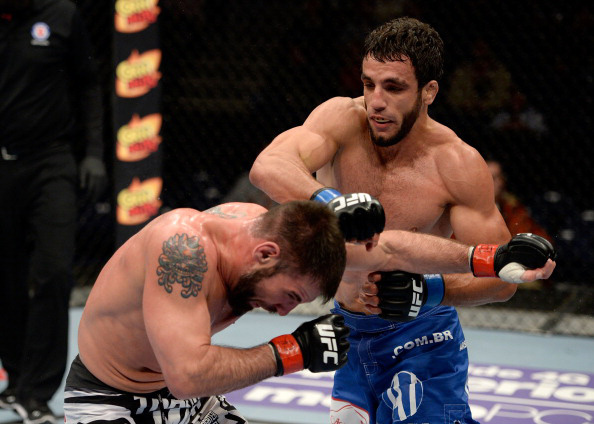 Vallie-Flagg two minutes in, and following up with a steady diet of ground strikes on his game opponent, who just didn’t stop battling.

The Brazilian remained in control in round two, even though he lost a point for kneeing his downed foe to the head. It was an infraction that put Vallie-Flagg on the offensive, but Silverio simply used that aggression to score another takedown.

Feeding Vallie-Flagg a steady diet of front kicks followed by right hands, Silverio tempered his opponent’s aggression and put him back on the canvas early in the third round. The Sao Paulo native proceeded to land with shot after shot from the top position, eventually taking Vallie-Flagg’s back for a rear naked choke attempt that didn’t finish the fight, but did put an exclamation mark on his victory. 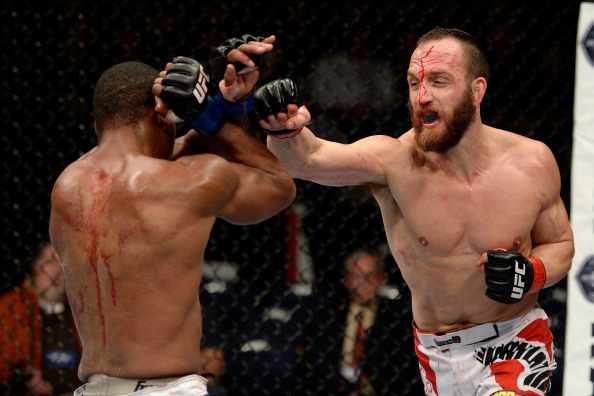 Houston was forced to be on the defensive for much of the first round against the steady aggression of Smith, and after surviving a near arm triangle choke submission, that had to be a moral victory of sorts, though not one that would be reflected on the scorecards.

After opening a cut on Smith’s forehead early in round two, Houston got fired up, and after tossing off a couple frenzied takedown attempts from his opponent, “B-Hue” had even more confidence. Yet he still wasn’t doing enough offensively to take the fight over, allowing Smith to stick around.

Houston did come on strong in the final frame, with his movement and quick punches keeping Smith from getting set with his own striking attack, but it was not enough to allow the Nebraskan to squeak out the victory.

Both fighters delivered quality action in the opening stanza, Smolka with his technical striking 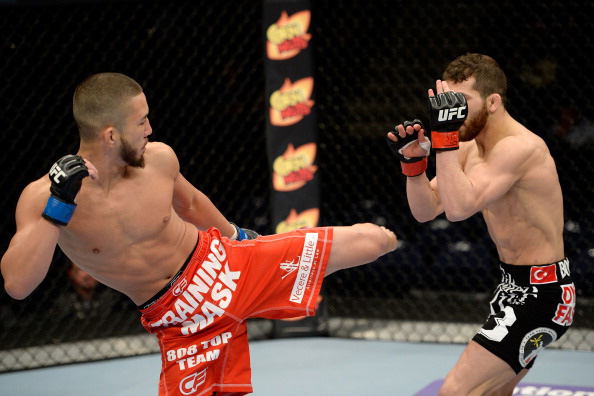 and ground defense, and Ozkilic with strikes that were, let’s say, a little less technical, as well as his always solid wrestling and ground attack.

Ozkilic bookended the second round with takedowns, but in between, it was Smolka’s long range striking attack and close range knees that had a tiring Ozkilic on the defensive for much of the frame.

Despite several Ozkilic takedowns in the final round, the third again belonged to Smolka’s whose accurate strikes had “The Turkish Delight” looking for any respite from the onslaught. Smolka wasn’t only effective on the feet though, as a late ground and pound assault nearly prompted a stoppage from referee Herb Dean.

Pichel started out the fight strong behind some accurate strikes, but the majority of his work was done on the ground thanks to a couple takedowns. Whiteley stayed busy on the feet and the mat as well, nearly sinking in a choke late in the frame.

A left-right by Pichel in the opening minute of round two set up another takedown, and this time, the former Ultimate Fighter competitor piled up the points with punches and by improving his position before Whiteley was able to get back to his feet. Pichel took him right back down though, remaining in control until the bell.

There was more of the same from Pichel in the third when it came to ground control, as he kept Whiteley from mounting any sort of offense, save for a late kimura attempt that Pichel was able to get out of, sealing the victory.

UFC debutant Beneil Dariush spoiled the Octagon return of Charlie Brenneman in the opener, submitting “The Spaniard” in the opening round of their lightweight bout.

After solid striking work from Dariush (7-0) on the outside and Brenneman (19-6) on the inside, Dariush dropped the Pennsylvanian with a left to the jaw a minute in. Dariush calmly moved in with ground strikes before sinking in a rear naked choke that produced a tap out at 1:45 of the first stanza.