From 'Nightmare' to 'Lionheart', Sanchez is a new fighter at 35

When you think about the fighters that have carried the torch for the UFC in the dozen years since The Ultimate Fighter became the Trojan horse that carried mixed martial arts into households around the world, there are obvious names that spring to mind. One of them is clearly Diego Sanchez, who faces Al Iaquinta in the co-main event of UFC Fight Night in Nashville this Saturday.

And while fighters like Chuck Liddell, Matt Hughes, Anderson Silva, Georges St-Pierre, Brock Lesnar, Ronda Rousey and Conor McGregor have occupied the spotlight and been the faces of the promotion, Sanchez has always been its heart and soul.

The first man to be christened “The Ultimate Fighter,” Sanchez has stepped into the Octagon 25 times in four divisions, delivering a string of unforgettable performances while establishing a legacy as one of the most resilient, tenacious fighters in UFC history.

On the eve of crossing the threshold into the UFC cage for the 26th time this weekend, the 35-year-old lightweight is showing no signs of slowing down.

Sanchez’ career has played out like several of his most iconic fights: right when you’re ready to write him off and think that he’s done, he comes roaring back and proves you wrong. While he hasn’t always come out on top, the Albuquerque native has never quit either, always finding a way to reinvent himself and remain relevant.
RELATED CONTENT: Sanchez matchup with Iaquinta | Fighter bio | Iaquinta returns to Octagon

He’s done it again in advance of this weekend’s pairing with Iaquinta, adopting a new nickname that embodies the performances he’s become known for throughout his career.

“Right now, I’ve reinvented myself and I’m ‘Lionheart’ and that’s because I asked myself, ‘What defines me as a fighter?’ and it’s my heart,” Sanchez said, explaining the origins of the moniker that replaces his familiar “Nightmare” nickname. “That’s where I’m at now. I’m the ‘Lionheart’ Sanchez and it drives me. It gives me more purpose.

“I’ve been in this fight game for a long time and right now is an exciting time for me because I have my focus, I have my purpose and I have my drive and everything is aligned correctly.”

Last time out, Sanchez took on Marcin Held, a fighter 10 years his junior and known for his submission skills. In the opening round, the Polish newcomer appeared to have Sanchez dead to rights, locked in a standing guillotine choke, only to have Sanchez propel himself forward off the fence to break the hold.

From then on out, it was vintage Sanchez, marching forward relentlessly, putting it on Held en route to a unanimous decision win.

“I’ve had some hard losses, but a loss can either make or break a man and I’ve always had it in my heart and in my gut to be able to bounce back from a loss. Now, at 35 years old, I’ll be honest with you: I feel better at 35 than I did at 25 – physically, mentally, spiritually. I’m excited for what I’m doing in my career.” 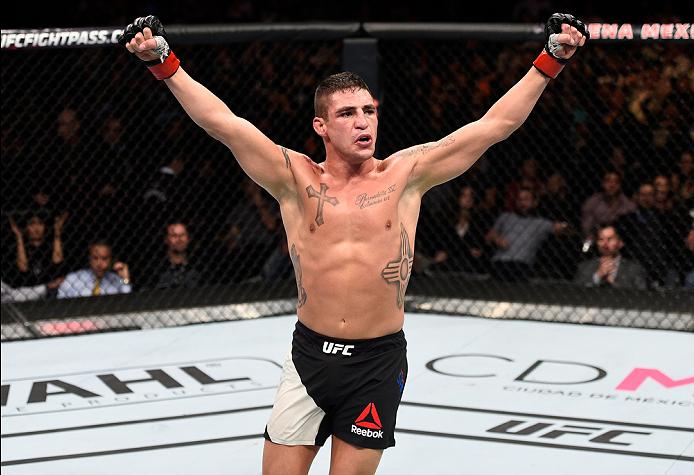 In order to take the next step forward in his journey, Sanchez has to first get through Iaquinta, who returns to the Octagon for the first time in two years this weekend.

Before his sabbatical, the Serra-Longo Fight Team member was on a roll, climbing the lightweight rankings with four straight victories, making good on the potential he showed while progressing to the finals on Season 15 of The Ultimate Fighter.

“Right now, at this point in my career being 35 years old, I’m strategically taking the right matches that are going to be the correct steps for advancement; that’s what it’s all about,” Sanchez said of this co-main event bout. “Team Al Iaquinta liked the fight and I liked the fight; it made sense on both teams.

“They watch my fights and see the holes in my game and think that I’m a good matchup for him and I look at him and see a fighter who is unfocused and has been out of the sport doing real estate for two years while I’ve been grinding, getting better in all aspects of martial arts. I said, ‘You know what, this is a good fight, so let’s do this.’

“I wanted to do it in New York,” he added. “But they set it up for Nashville and now we’re ready to go. Everything is full force and we’re going to fight.”

And while his catalogue of past performances offers a pretty good idea of what to expect from Sanchez on Saturday night at Bridgestone Arena, the man who has been the heart and soul of the UFC for the last dozen years promises a little something extra as well.

“You’re gonna be shocked on April 22 because this is just the start,” he said. “This is the debut of The ‘Lionheart.’ I’m coming stronger than I’ve ever been in my life and I’m gonna shock the world and it’s gonna be the start of something great.”