“The Nigerian Nightmare” has a dream and it’s to claim UFC gold.

The first step to making that dream a reality for welterweight prospect Kamaru Usman is to believe in himself. The second step is amassing a whole bunch of Ws inside the Octagon. And The Ultimate Fighter 21 alum is well on his way with both.

“You have to believe you are the champion,” Usman said. “You have to believe you can get the job done. That’s all it takes. If you don’t believe, then you’re not going to do it. My mindset is exact. Every now and then I struggle because of injuries, but, at the end of the day, my mind is strong. I believe I will be champion of this division one day. I know I have to start from the bottom, but I know that’s what I have to do to get to the top.”
WATCH: Kamaru Usman Octagon interview after his TUF 21 finale win

In a previous athletic life, the 28-year-old native of Auchi, Nigeria had his sights set on a different form of gold - Olympic gold. As a three-time NCAA Division II All-American wrestler from University of Nebraska at Kearney, Usman would move to the Olympic Training Center in pursuit of international acclaim and there, he learned what it meant to be an elite athlete, both physically and mentally.

Eventually, Usman would take that knowledge into the sport of MMA, into the JACO Hybrid Training Center as a member of The Blackzilians and into The Ultimate Fighter: American Top Team vs. Blackzilians competition While the season had a unique set of rules and challenges, it was clear from the very beginning to Usman that the climactic welterweight finale would come down to himself versus ATT’s heavy-hitter Hayder Hassan. And Usman wasted no time preparing himself mentally for that clash.

“From day one, he was the standout from their team,” Usman said. “He had the confidence, he had the swagger about him. I felt he was their team captain. Some people might say the same for me. For me, I was the one people looked up to, to kind of get everyone together and pick up their morale if the morale was down. I saw him as that person from his team. I knew we were going to fight, I just didn’t know when. But we were destined to fight. Being in the house, I got a front row seat to witness how this guy’s fights and I’m someone who loves to study. I love this game with all of my heart and I love to study it. Studying him, he had a huge weakness and, it so happens, that weakness was my biggest strength. It was a matter of time. I just had to exploit his weaknesses and that’s what I did in the finale.” 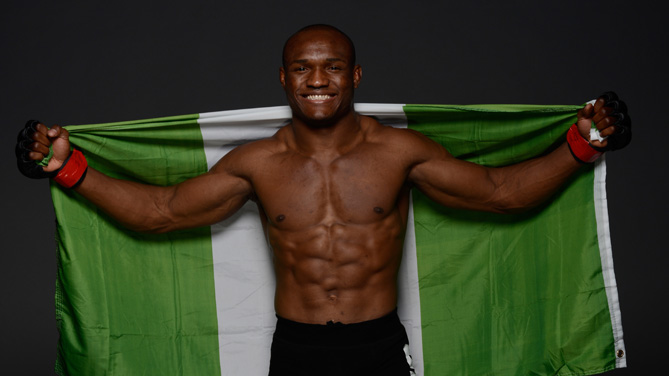 Apparently, that weakness was stopping Usman’s takedowns. The Nigerian Nightmare scored six takedowns in just over six minutes of Octagon time prior to sinking in an arm triangle choke to nab his first UFC win and a Performance of the Night bonus. Grounding his opponent against their say-so was nothing new, but the sub stoppage was Usman’s first and it improved his pro record to 6-1. As his previous career five KOs can attest, he is well-inclined to drop bombs while on top, but now, Usman will hunt for submissions too.

“It felt great,” Usman said of his first submission win. “Initially, I hated jiu-jitsu. If you think about it, jiu-jitsu in some ways is kind of a counter for wrestling. And vice versa. For a hardcore wrestler to try jiu-jitsu, it was tricky. It was frustrating. You go from wanting to go from dominant position to dominant position, to having to give up certain positions and lay on your back to set a guy up for a choke or submission. To play that game, it was frustrating initially for me and I didn’t like it. But more and more, I got into it and I learned that I could blend my style into jiu-jitsu. I gravitated toward it once I started to see the holes and the tricks that they teach you. I started to love jiu-jitsu. Those are things I have been working on. In that fight, I was in a position where I could have ground and pounded him until the ref pulled me off of him or until I put him to sleep. But I wanted to show that I knew something else and I felt that at that moment and I went for it.”
Fate and the Journey of Kamaru Usman

Up next, Usman will represent his adopted home state of Florida at UFC on FOX: Dos Anjos vs. Cerrone in Orlando against England’s Leon Edwards. Following a disappointing split decision loss in his Octagon debut, Britain’s “Rocky” has scored back-to-back UFC victories with an eight-second KO of Seth Baczynski and a unanimous decision over Pawel Pawlak. On paper, it’s a classic “striker vs. grappler” matchup, but Usman sees it more as a difference in pace and intensity that he will use to defeat the Brit.

“Leon Edwards is a good opponent,” Usman said. “He’s a very dynamic striker on his feet. He’s done well for himself, but he’s not faced anyone like me. He’s not felt the type of pressure I can put on somebody. He’s never felt that. He’s never faced a wrestler of my caliber. He’s never faced a fighter of my caliber. He’s a dynamic striker and I’ll give him props. He’s very talented in that way. His striking level is very high, but so is mine. His ground level is pretty high, but mine is better. I’m just better in every way than him. That’s what I’m going to prove. He’s a tough man and I’m not trying to take anything away from him, but when the fight is on, I will be victorious.”

Obviously, Usman is busy training for Edwards with The Blackzilians. Sharing the mats with the gym’s “founding fathers” like Michael Johnson, Tyrone Spong and former UFC champ Rashad Evans, Usman is leasing the charge for the Blackzilians’ next generation of Octagon stars. As important as the litany of incredible sparring partners is, the Blackzilians’ coaching staff is equally impressive, with Henri Hooft for striking, Greg Jones for wrestling, Jorge Santiago for jiu-jitsu, Jason Gochez for boxing and recent addition Neil Melanson for catch wrestling.

“Our team, there’s so much depth,” he said. “Anyone who has come into our gym to train can attest to this. It doesn’t matter what weight class you spar with, you are going to get beat up. A 135-pounder will beat you up. You could be a 185-pounder and go against a 135-pounder and you will have it put on you by one of those guys. It’s only hungry lions in our gym. They might have only two or three fights, but they’re hungry lions because they know they need to be at that level to train with this team and to get yourself to the top. There’s a whole generation of new guys coming up and we’re just piggybacking off of our founding fathers.”

This Saturday, Usman aims to best Edwards and get one step closer to making The Nigerian Nightmare’s dream a reality.

“When I first came into this sport, I was unsure about the future, but it looks a lot clearer right now,” he said. “I can get to the top of this and become the champion of this division. Fans can expect me to put it all together and start to show them the guy who will rule the division one day.”