Nicolas Dalby's Sights Are Set Ahead

Now Known As "Danish Dynamite," Nicolas Dalby's Sights Are Set Ahead On The Bigger Picture Heading Into His UFC Fight Night: Gane vs Volkov Matchup Against Tim Means
By McKenzie Pavacich, on Twitter @mpavacich_ • Jun. 24, 2021

By now, Nicolas Dalby’s story of perseverance and redemption isn’t really news to us since his return to the UFC nearly a year-and-a-half ago.

Thriving in his second stint in the UFC as he heads into his 26th professional fight this weekend against Tim Means at UFC Fight Night: Gane vs Volkov, Dalby simply feels grateful.

“He’s a veteran of the sport and UFC,” the Dane said in his fight week interview with UFC.com. “It’s amazing to get the opportunity to fight a guy like him. He’s exciting because he brings a lot of tools to the fight. He’s got his knees, got his elbows, he’s a good grappler, he’s a good striker and he’s really good at pulling people into his rhythm and his distance.”

Nicolas Dalby (@DalbyMMA) talks about how he came up with his new nickname and the start of a new chapter at #UFCVegas30 🔉⬆️ pic.twitter.com/4Ag6JsiMor

It’s not the first matchup with a veteran Dalby has had to face inside the Octagon, as his coveted return to the UFC was met with a test in Alex “Cowboy” Oliveira -- a test he passed by way of a unanimous decision victory in 2019 in front of a home crowd in his native Denmark.

“I really like these fights because of the maturity they bring,” Dalby said of adding another veteran name to his rolodex of opponents. “It’s weird, I feel like I can fight a better fight in a way.”

MORE UFC FIGHT NIGHT: Fight By Fight Preview | Rise Of Alexander Volkov | Significant Stats | Rise Of Ciryl Gane | Alexander Volkov Can See His Path To The Title | Kennedy Nzechukwu Is All About Resiliency And Discipline | Jai Herbert Is Focused Only On Moving Forward | Raoni Barcelos Is Ready To Break Through

Dalby, excited to let loose after a stiff, but successful, performance against Daniel Rodriguez in November, said that he’s excited to relieve the pressure of “fighting to keep my job.”

“I think I learned that if I keep my focus and fight the way I fight best, I’m going to get the victory,” Dalby said. “Last time I was maybe holding a bit back because I didn’t want to risk anything, going into crazy positions with Rodriguez, because he thrives there. This fight, I don’t have that same pressure, so it’s going to be more exciting.”

An exciting fight is a promise that will likely be easy to keep, as Tim Means enters the Octagon with 45 professional fights under his belt. With more than half of his victories coming by way of knockout, he’ll look to hand Dalby his first career loss by way of finish -- something that Dalby doesn’t plan on letting happen.

“It needs to be a dominant victory. Hopefully a finish, that would be excellent; if it’s a submission or KO, I don’t care. I just want it to be exciting,” Dalby said of his expectations for himself this Saturday.

“I’m changing up my nickname from Lokomotivo to Danish Dynamite. I’m Danish and I bring the dynamite in almost every fight, so it fits.”

Confident in his abilities despite a few setbacks in his career, the 36-year-old said he feels that we’ll see the best version of himself this weekend inside the Octagon.

“I’ve matured a lot as a fighter; I’m a late bloomer, but I really feel like the last year I’ve leveled up in a lot of ways - mentally, physically. My cardio has never been better than it is for this fight, and I’m not just saying that -- I’ve got the hard data to back it up. Mentally I’m in a very good place, kind of in the same mentality I was in for Copenhagen, and things went well there.”

Despite the hurdle that is to first be cleared inside the UFC APEX this Saturday, Dalby said he draws confidence from the “bigger road map” of his career -- a two-year plan that he hopes culminates with a title shot. 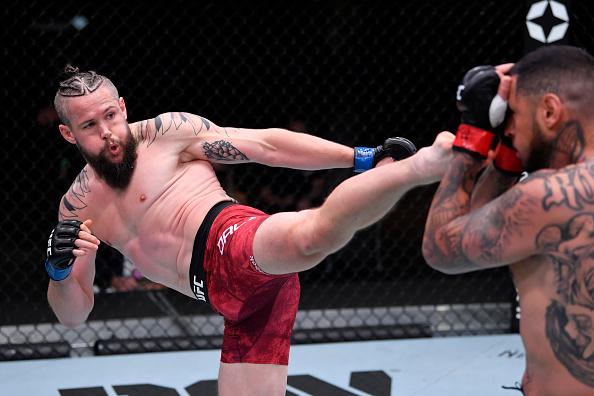 Nicolas Dalby of Denmark kicks Daniel Rodriguez in their welterweight bout during the UFC 255 event at UFC APEX on November 21, 2020 in Las Vegas, Nevada. (Photo by Jeff Bottari/Zuffa LLC)

“Of course, the fight in front of you is always the most important thing, but for me, having some general plans looking forward is good for me,” Dalby explained. “It gives me the motivation in between fights, to keep going even harder. In some weird way, having a general sense of where I want to go also helps me prepare for the specific fight right ahead of me. So, I’m not looking past my next fight at all; it’s just motivating me a little bit more to have success.”

Armed with a renewed sense of confidence thanks to a bigger picture plan, and of course the new nickname, “Danish Dynamite” said while he’s confident this fight will bring the fireworks, he’s simply proud of what he’s been able to accomplish during this camp.

“I’m going to be proud that I was able to get through a lot of distractions leading up to this fight, and still keep my focus. Just like when I fought in Copenhagen and got re-signed, there was a lot of pressure, a lot of buzz and a lot of distractions to kind of take your mind away from things, if you let it. I’ve had the same kind of thing for this fight, in different aspects, and I’ve been able to maintain my sharp focus all the way though, and I’m going to be proud of that when I get my hand raised on Saturday.”