Nicolas Dalby Is A New Man

Following two losses in 2016 that resulted in getting cut from the UFC, Nicolas Dalby took some time away from the sport and has rejuvenated his career fighting in Cage Warriors.
By Thomas Gerbasi • Jun. 28, 2019

It’s the elephant in the room as Nicolas Dalby prepares for his Cage Warriors main event against Ross Houston on Saturday in London, but the affable welterweight doesn’t mind the line of questioning, which zeroes in on the possibility of him making a return to the UFC this fall when the Octagon lands in his hometown of Copenhagen, Denmark on September 28.

“In the end, that’s not up to me to decide,” said Dalby, whose last UFC appearance was in 2016. “What I can do is put on my best performance ever and hopefully the fans and the promoters, they want to see that at UFC Copenhagen. I can’t imagine why they wouldn’t want to see it, so I’ve got to put everything on the line on Saturday and I’ll let my fighting do the talking.”

It may be the most important fight of the 34-year-old’s MMA career. A win over Houston will get the fans buzzing about a UFC return, but the main thing at the moment is to hand the Scotland native his first pro loss and take his Cage Warriors title. A victory would make Dalby (currently the 170-pound interim champ) a two-time welterweight champion for the promotion, and that’s a big deal considering that the likes of Conor McGregor, Michael Bisping, Dan Hardy, Gegard Mousasi and Martin Kampmann, among others, have held the CW belt.

But for Dalby, the promotion has been more to him over the years than just a place to fight.

“Cage Warriors has meant a lot,” he said. “It’s kind of like my home away from home in fighting. I’ve grown to know a lot of the crew and the fighters there, so it really feels like a nice safe place to be and an amazing promotion that’s really helped me in my career, so I couldn’t be more happy to fight for them again.”

And having another shiny belt doesn’t hurt either.

“I don’t mind that at all,” he laughs, and it’s good to hear Dalby in good spirits considering all he’s been through over the last few years. Dealing with depression and a battle with alcohol, Dalby hit rock bottom after two losses that got him cut from the UFC in 2016. But after more than a year and a half away from the sport, Dalby returned in 2018 and he’s since won three of his last four bouts, including three straight finishing wins that have led him to the bout against Houston.

“I think the secret is that I got my head in the right place,” Dalby said. “When I got signed to the UFC the last time around, I was already on a spiral. And I was lucky / unlucky that my professional career was kicking up when I was getting worse. So for a while I made it work, but as my mental health deteriorated, it was difficult to keep it up in the cage as well because it’s a very demanding sport, physically, and mentally as well. So now that I’ve got my head in the right space, that’s why you’re seeing what I can really do.”

Dalby has also become a father, with his eight-month daughter a constant inspiration for him. And he’s an inspiration as well to a host of people who have followed his struggle and who admire his honesty in telling his story.

“I think it’s very important,” he said. “I’ve at least had a lot of people tell me that they find a lot of inspiration in my story and my resurgence and how I’ve pulled myself up from depression and alcoholism and stuff like that. So part of me talking about it is partly because it helps me get over it and it also helps other people who might find themselves in a similar spot, maybe not professionally, but mentally, and it seems to be a great inspiration for people that want to move on and get better.”

Dalby has gotten better and he’s moved on. And as good as he’s looked in recent fights, it pays to also look back and realize that as he battled depression, he still holds a UFC win over surging contender Elizeu Zaleski dos Santos and fought to a draw in an instant classic with world title challenger Darren Till. Those are no small feats, especially when not at a hundred percent, and Dalby knows it. 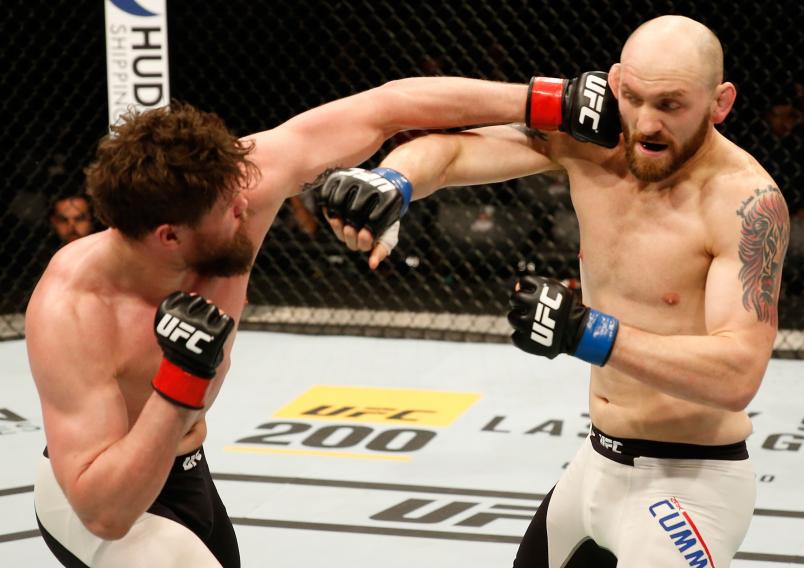 “It’s been weird watching those guys perform so well after I fought them and took them to a loss or a draw,” he said. “In some moments, it wasn’t helping my depression to see that, but then I came to a conclusion that it’s only good that they’re winning because that meant that even when I wasn’t at my best mentally, I was able to fight these guys and make them struggle. So once I got my head straight, it gives me a lot of confidence in how good I actually am and what I’m able to achieve.

“I guess it’s like if you’ve faced your demons or your phobia,” Dalby continues. “If you’re scared of heights and go bungee jumping, you feel empowered by looking your demons in the eyes, and that’s kind of how I feel. I’ve gone through this and it was very tough on me and my relationship with my fiancé and it was tough on everyone in my life. So coming out on the other side of that is why you see me perform so good. Now I actually trust in myself, I have self-confidence and I know I can do anything I want if I set my mind to it.”

And maybe, just maybe, UFC fans will be seeing him in Copenhagen in a few months.

“I’ve got a fight to fight first, so I won’t try and set my hopes up too high because there’s an important task at hand first,” he said. “And I have to focus on that.”