Nico Musoke: Timing is Everything

"I know that when I perform at my best, I’m right at the top, and I’ll be willing to prove myself one fight at a time." - Nico Musoke 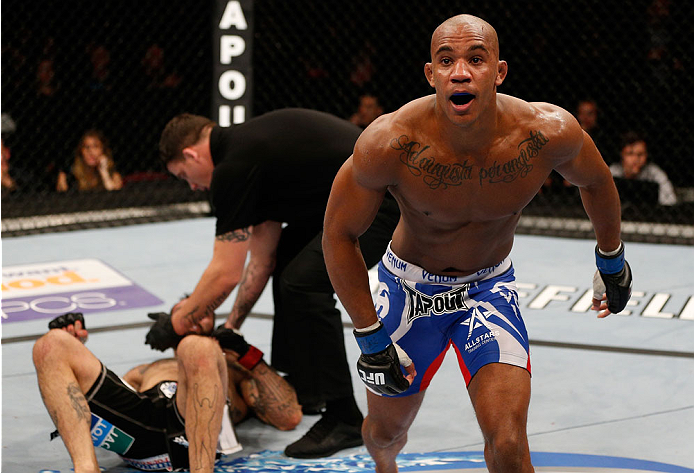 The call from the UFC. For every mixed martial artist, it’s the validation for all the years of blood, sweat, and tears. And for 99% of those who receive it, things like opponent, venue, and date are mere details to be dealt with later. Nico Musoke is part of that 99%.

“Honestly, there was no hesitation at all,” said Musoke, who accepted a short notice bout with Alessio Sakara at UFC Fight Night in Manchester, England last October after Tom Watson and Magnus Cedenblad were both forced out of the matchup due to injury. “It’s what I’ve been waiting for, what every fighter in my position is waiting for. All the work we put in is just to hear that call. And then when that comes, another chapter begins. So when it came, I was just happy and there was no hesitation at all. Sure, it took a few days actually for it to sink in, ‘okay, it’s in two weeks.’ But more than anything, I was just happy and excited for the opportunity.”

In other words, no worries about having two weeks to prepare for the biggest fight of your life, no concerns about facing a veteran foe in Sakara who had more UFC fights (14) than you had fights (13). In fact, they could have called Musoke up with a bout against UFC heavyweight champion Cain Velasquez and he would have said yes.

One Sakara was enough for Musoke, and despite everything seemingly in the Italian’s favor going in, it was the 27-year-old Stockholm native who pulled off the victory, finishing Sakara in the second round of a match that earned the newcomer Submission of the Night honors.

Now that’s a debut, and for Musoke, it was everything he imagined it would be when he sat in the stands at the Ericsson Globe Arena back on April 14, 2012, the night the UFC arrived in his home country of Sweden.

“It was nice to have friends and training partners on the card, and having the UFC in the country and in my hometown, that was great,” he said of the card headlined by teammate Alexander Gustafsson. “On a personal level, I wanted to be on that card, but I knew I most likely wouldn’t have been on the card. I was bummed, but all in all, looking back, it was a huge step in the right direction. It was a sign of new beginnings.”

A little over a year later, Musoke would make it to the big show, capping the first chapter of a pro career that began in 2007. At that time, the UFC was beginning to make serious inroads on the European scene, but there was still a negative connotation attached to the sport, one Musoke was only too aware of.

“It surely has been a trip,” he chuckles. “Before, I would lie about what I was doing just to avoid certain longer discussions with prejudiced people. If people would ask ‘do you box?’ I would give them the short answer and say yes. But then if I could sense that they were genuinely interested, then perhaps I would go ahead and explain that it’s actually MMA that I’m doing. Back then, there weren’t many positive reactions, but it has grown and today at least, most people, if not all, know of the sport and they know what it’s about. And even if they may not necessarily like it on a personal level, they still can remain kind of neutral and look at it and say ‘okay, this is what you do, kudos to you and the best to you, but it’s not for me.’ So the stigma has been removed and people look at it a bit more neutrally.”

A lot of that new outlook has to do with the arrival of the UFC in Sweden and the emergence of Gustafsson as an elite light heavyweight. Add in the Ultimate Fighter appearance of another Musoke teammate, Tor Troeng, and Musoke knew that he was on the right track to one day join his friends in the Octagon.

“More than anything, on a friendship level I’ve always been happy for them,” said Musoke. “And also, before being signed to the UFC, (seeing them in the UFC) it was kind of a reminder that the work that we do daily works at the highest level. All you’ve got to do it believe in it. Knowing that, there was no other option than to keep working, believing in the system and knowing that my time will come.”

His time came last October. It was a bit unexpected, but when the pressure was at its highest, he performed. On Saturday, he will be back in the Octagon, back at his natural fighting weight of 170 pounds, back on the main card, and back in the spotlight as he takes on Viscardi Andrade in Brazil. Musoke set the bar pretty high the first time he fought in the UFC; what does he do for an encore?

“I set the pace then, and I don’t intend on doing anything less than having a spectacular performance,” he said. “If that will end up in a bonus, it will play out during the fight. I know that when I perform at my best, I’m right at the top, and I’ll be willing to prove myself one fight at a time, and all I have in mind is giving it my all on fight night.”