"You just gotta step up and surprise people. I’ve been the underdog the
last couple fights, so I guess I gotta just keep proving people wrong.” - Nick Pace 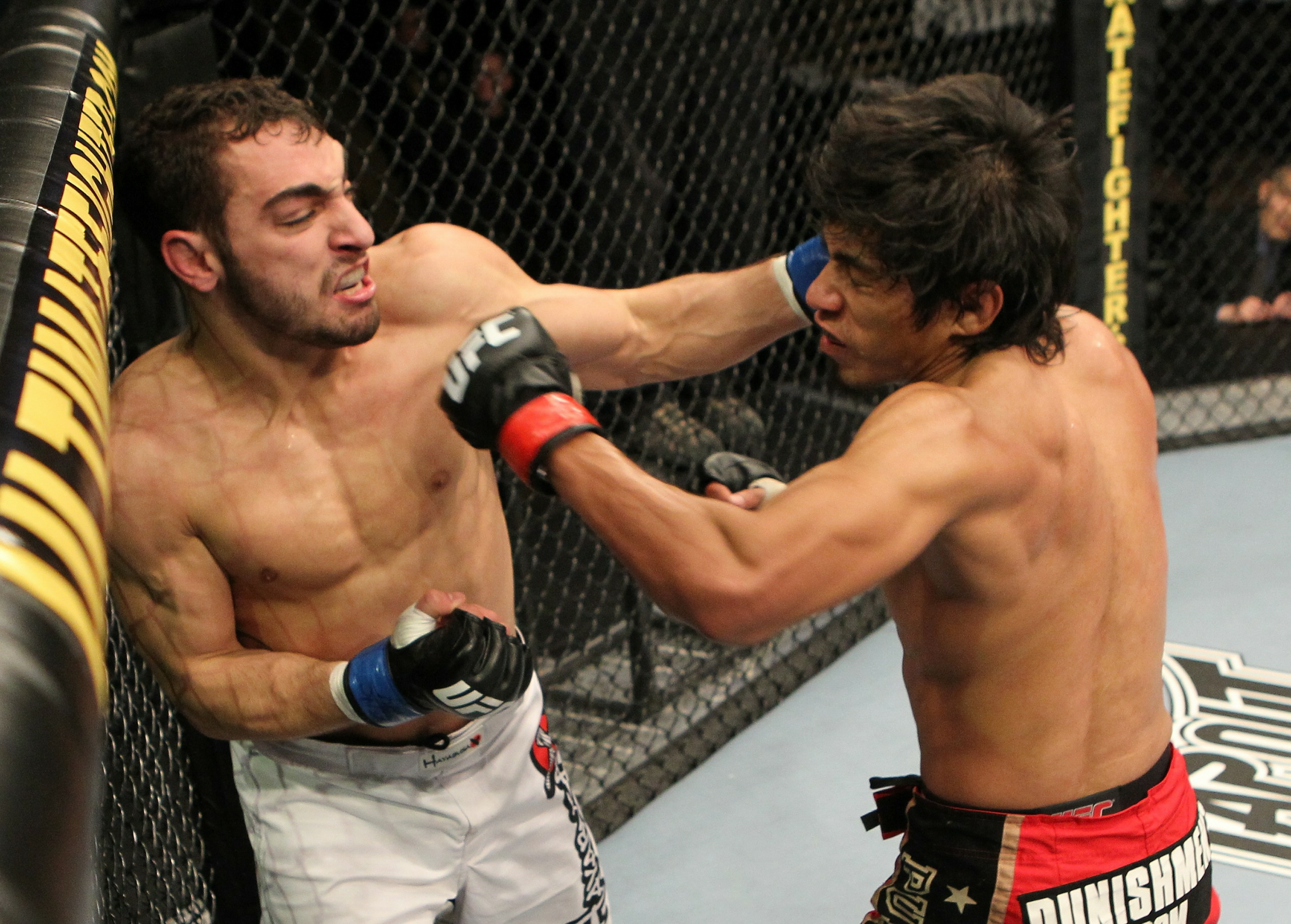 The joke around Staten Island used to be that the best fighter to emerge from the fifth borough of New York City was beloved New York Rangers enforcer Nick Fotiu. Of course, there were brief flashes in boxing from 80’s contender John Verderosa and recent prospect Gary Stark Jr., and former UFC heavyweight champ Ricco Rodriguez used to call the Island home, but for the most part, there’s been little to get excited about for local fight fans until UFC bantamweight Nick Pace showed up.

“I think there should be a lot more fighters here because there’s really nothing to do in Staten Island,” laughs Pace, who faces Ivan Menjivar at UFC 133 on August 6th. “And instead of doing nothing, they should probably come and train.”

If Pace is burdened by the idea that he is alone in representing his city on the sport’s biggest stage, it doesn’t show. But that doesn’t mean he’s oblivious to the fact that the automatic reflex when glancing at a bout sheet and seeing his hometown is to say ‘ah, can’t fight.’

“In anything, people automatically judge, and it’s not good to judge somebody right off the bat and say ‘he’s from Staten Island, I don’t think he’s gonna be a good fighter. How is he gonna get any good training over there?’” said Pace. “But that’s why you just gotta step up and surprise people. I’ve been the underdog the last couple fights, so I guess I gotta just keep proving people wrong.”

6-1 in a pro career that began in 2008, the 24-year old Pace has been training in martial arts since the age of 10, and he’s done so with the same coach, Shihan Danny Schulmann. If the name doesn’t sound familiar, let’s just go with the more recognizable name, Tiger Schulmann. The Tiger Schulmann MMA schools are an east coast staple, but as with any chain, there’s also the stigma that it’s not a “real” place to learn how to fight. That’s another scarlet letter Pace has had to carry around, but again, he’s proud to do so and to stay loyal to his coach and camp.

“When I started when I was 10, I fell in love with it, and it just kept evolving and it kept getting better, and it held my interest,” he said. “It was also showing me new things and I was getting better and going to tournaments before I even started fighting. We went from being Tiger Schulman’s Karate to Tiger Schulman’s Mixed Martial Arts and I’m definitely loyal. On the east coast, you used to hear ‘oh, people from Tiger Schulman’s, they’re bogus martial arts, they’re like a McDojo.’ But setting me aside, we earned a lot of respect with all the fighters coming out of our camp. We fought people from Serra’s, we fought the Gracies, ATT, and everyone on the east coast, we fight. You ask people now, and they know, and they have a little bit more respect for us. They know we’re the real deal.”

A former Ring of Combat standout who also scored a highlight reel flying knee knockout of Collin Tebo in a Bellator show in 2009, Pace got his call to the big leagues in 2010, and he gave a good showing in a competitive three round loss to Demetrious Johnson in a WEC bout last September. The fact that “Mighty Mouse” has gone on to defeat Damacio Page, Kid Yamamoto, and Miguel Angel Torres in succession to earn an October shot at Dominick Cruz’ bantamweight title may soften the blow of Pace’s first defeat a little, but not much.

“My fight with Demetrious Johnson, at least I didn’t lose to some shmoe, because the guy’s really good, and hopefully sometime down the line, if I keep putting my work in and keep getting wins under my belt, I’ll get a rematch with him,” said Pace. “But that’s like a thorn in my side and it really put a damper on me. I thought I was the man until I fought him, but it was good because it humbles you, and you learn more from your losses than you do from your wins.”

Migrating over to the UFC, things continued to go downhill when he came in at 138 pounds for his December bout with Will Campuzano, making it imperative that he win the fight to keep his job.

“I lost that first fight, and then the next fight I came in overweight, and I learned things the hard way.”

But his talent showed through, as he submitted Campuzano in the third round and earned another shot in the Octagon. A March fight with fellow prospect Michael McDonald was scrapped due to injury, but in Philadelphia on August 6th, he’ll square off with Canadian veteran Ivan Menjivar.

“I know he’s been around for a while,” said Pace. “Some people ask me, ‘who ya fightin’ bro?’ Ivan Menjivar. They’re like ‘Who?’ Then they go look him up and they’re like ‘Oh my God, he fought GSP (Georges St-Pierre) and Matt Serra.’ I’m very excited to fight him, but I’m not intimidated. That’s not anything against him, he’s a bad ass fighter, he’s got a lot of experience, he’s super tough, and he trains with a really good camp, but I’m not intimidated. If you go in there and say ‘oh my God, this guy is so good,’ you’re already defeating yourself mentally, and that’s half the battle right there.”

Given the doubts that have been thrown his way already, Pace is not one to lose that mental battle. And at this point, he kind of enjoys being the underdog.

“Being the underdog, you’ve got more to fight for,” he said. “It gives you that extra boost and pumps you up a little more. When people count you out right from the beginning, that can mess with someone’s head and make them start believing it. So you just have to have a strong mind and believe in yourself. So if you believe in yourself and people are trying to put you down or talk smack, you just have to be the stronger person and use that energy in a positive way and let that be the fire under your butt to make you work even harder.”

Not a bad representative for Staten Island fighting, eh? But Nick Pace can’t get caught up in such matters. He needs to worry about Ivan Menjivar, winning, and showing people that he’s ready to move up the ranks and be considered not just New York’s best bantamweight, but the world’s best.

“I haven’t fought the way I wanted to fight, and it’s been a little rocky,” he admits. “It kinda gets me a little upset at myself because I want to perform so much and show everybody how good I am. I need this fight to step up my game and show everybody that I’m here and that I’m no joke.”