Nick Hein: A Wolf in the Lightweight Fold

"It did feel greet opening my account in the UFC with a win. However, I am well aware that that means absolutely nothing and I will be starting from scratch again as I enter the Octagon for the second time." - Nick Hein 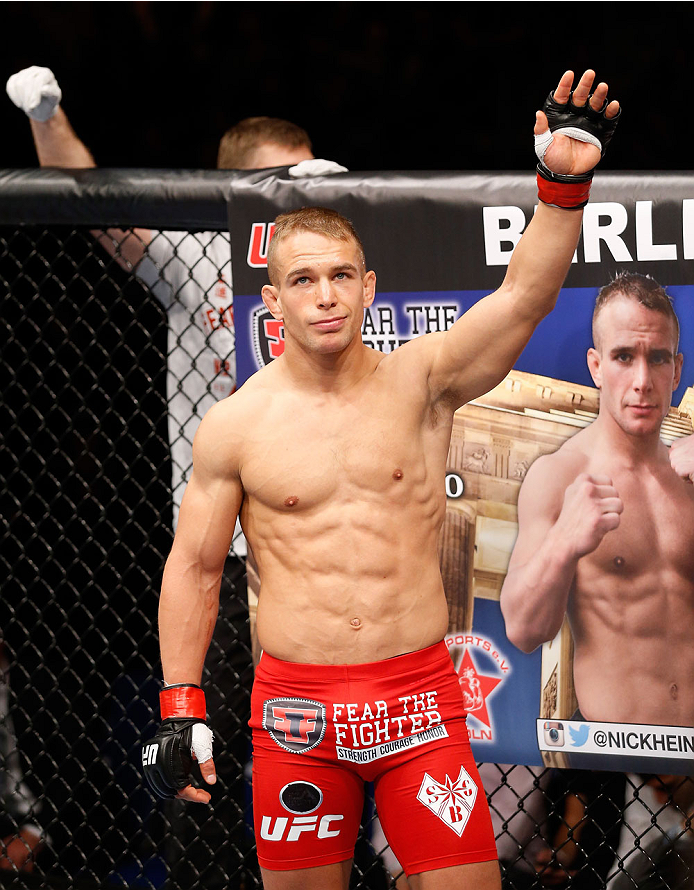 No two fighters get where they are looking to go by traveling the same path.

This especially rings true for German powerhouse Nick Hein, who has put together one of the most versatile portfolios of any fighter currently competing at the highest level. The 30-year-old has tested his skills in both the artistic and athletic realms as he appeared as an actor in a popular sitcom on television sets in his home country just before launching out into a successful international judo career where he won numerous tournaments around the globe.

Furthermore, Hein went head and heart into both tasks while progressing up the ranks of the Cologne police department - hence “The Sergeant” moniker that suits him so well. And while having deep commitments in a variety of areas can tend to spread an athlete thin, Hein thrived within those challenges. He discovered at a very young age the risk and reward that comes from getting out of his comfort zone, and facing up to new challenges brought out the very best in him.

“I’ve been an athlete since I was six years old,” Hein said. “I’ve won a lot of national and international titles in judo.  While judo is just a little part of MMA and just nowadays a little part of my game as well, the experience of competing at the highest level for such a long time is something nobody can ever take away from me.  I know what it’s like to walk out into a big arena for an important competition. I’m used to the pressure. I know how to train for it and how to deal with it.”

Where the actor turned judoka turned surging mixed martial artist had a successful debut against Drew Dober when the promotion made its inaugural visit to the German capital of Berlin, he was unsatisfied with the victory alone. Hein wanted to put Dober away in exciting fashion because that’s what he’s aiming to do every time he steps into the Octagon.

Hein wants to give fans a reason to remember him and he has every intention of making that happen each and every time he goes to work under the UFC banner.

“My mentality when I step into the Octagon is that I just want to leave everything in there. This is the culmination of ten weeks of hard training. This is the fun part, this is what I love doing. When I step into the cage, I’m doing it to test my skills against the skills of my opponent, but also to entertain the fans. The applause and the cheers of the fans is the reward for all the hard work.

“It did feel greet opening my account in the UFC with a win. However, I am well aware that that means absolutely nothing and I will be starting from scratch again as I enter the Octagon for the second time. The level of competition, especially in the lightweight division, is just so incredibly high that you have to work hard to evolve each and every time in order to stay competitive.”

With entertaining MMA’s passionate fan base being one of his main objectives inside the Octagon, the scrappy lightweight won’t have to look far for the action in his next fight as he’s slated to face James Vick at UFC Fight Night: Swanson vs. Edgar this Saturday night in Austin. In his short time on the sport’s biggest stage, “The Texecutioner” has been electric once the ruckus goes live, as the undefeated prospect has shown a willingness to trade from pillar to post.

Furthermore, the 27-year-old is undefeated as a professional, with two of his six victories coming inside the Octagon. When asked for his thoughts on his upcoming bout with Vick, the German lit up with excitement.

“With all due respect for my last opponent Drew Dober, who is a great athlete and a lionhearted fighter in his own right, fighting Vick will crank it up to another level on the difficulty scale,” Hein said. “First and foremost, he’s bringing a unique challenge, which is his size. There are few lightweights as tall as him. I won’t be fooled by his (lack) of experience either – he’s been on the Ultimate Fighter, where he made the semifinals, and prior to that he’s been boxing as well. I think that the two of us match up really well and it should be a very exciting fight for the fans.”

While Hein will certainly have his hands full in Austin, he’s also looking at the bigger picture as well. The lightweight division is one of the most talent-rich collectives under the UFC banner, and there is no such thing as an easy matchup in the 155-pound ranks. That said, Hein is well aware of how competitive the road ahead will be, and he plans to use his performances on fight nights to draw bigger names from the divisional hierarchy every time out.

And if that goal sounds ambitious, his plan to headline the next UFC event in Berlin will seem downright shocking. Nevertheless, Hein has never been one to keep his dreams running on a fixed scale. He’s made a career out of capitalizing on the opportunities within his grasp, then going further and beyond to see what is waiting for him on the other side of the horizon.

“The UFC lightweight division is an absolute shark tank,” Hein said. “You’ve got amazing all-rounders like Joe Lauzon, hard-nosed brawlers like Ross Pearson or the eternal Gleison Tibau and these guys are not even in the Top 10. I’m looking forward to working my way up in the rankings and hopefully I will be able to test myself against some of the best next year.

“I’d like to have my fighting do the talking. Getting another win would be huge for me. My ultimate dream is to headline the Berlin event next year and I need to get as many wins under my belt as possible before to stake out a claim for that.”