"To be honest with you, I’ve been waiting for this opportunity for all my life." - Nick Hein 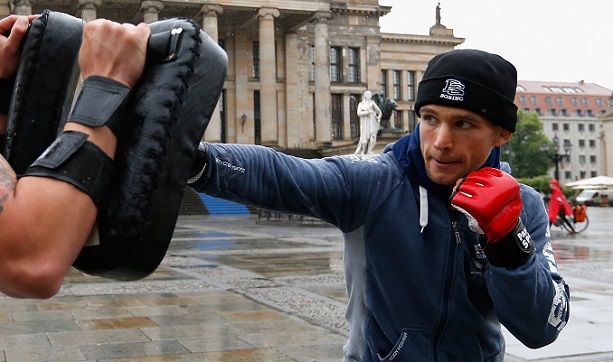 Star making is not an exact science. But when you took a look at Nick Hein’s pre-UFC resume and through in the fact that he is a German fighter making his Octagon debut in Germany this Saturday on UFC FIGHT PASS against Drew Dober, it’s easy to see why people have been captivated by the Elsdorf native’s story.

“To be honest with you, I’ve been waiting for this opportunity for all my life,” said Hein. “I’ve been practicing these interviews in front of my mirror ten years ago already. I’m so happy that I finally get the chance to show what I’m made of and to actively play a part in this event. Of course it hasn’t been easy to complete fifteen training sessions a week and still be fresh and motivated to do all the media work, but fortunately I’ve got a ton of support from my wife and family, my friends and my colleagues at work.”

Not easy may be an understatement, as Hein has been the focal point of the promotion locally, but despite getting pulled in several different directions while still trying to keep his training and mental focus intact, he’s finally seeing the finish line in Berlin.

“It’s been an extremely demanding last ten weeks for me, both physically and mentally,” he said. “I’ve pushed myself to the limit in training and there has never been a time in my career where I have been better prepared. I know this is my one shot to make it and I’ve pushed everything else aside, so the fans in Berlin will be able to see the best Nick Hein ever. At the same time I’m happy the daily grind, the dieting and all the interviews will soon be over. I can’t wait to finally get into that Octagon and throw down.”

With a 10-1, 1 NC record as a mixed martial artist, Hein has impressed in competition thus far and he is expected to continue his success in the UFC’s lightweight division. But going back to that star making thing, why has Hein captured the imagination of the public and the media like few recent debutants have? Well, he is a police officer, actor, and a top-level judoka who came close to earning an Olympic berth. Yeah, he’s not your average prizefighter. So how does he keep it all together? 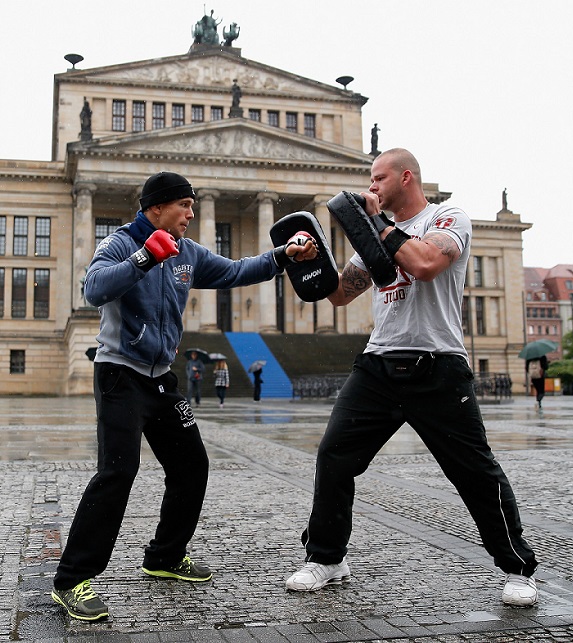 “Even though I’m working as a sergeant in the German Federal Police and I’m doing a little acting on the side, my absolute number one priority is my sport,” said Hein. “Everything else has to accept a subordinate role to my training and my competitions. MMA is my passion and I want to do everything in my power to accomplish as much as possible now that I’m in the UFC.”

If the 30-year-old - who now makes his home in Cologne - sounds like he has a sense of urgency to succeed, realize that he considers the UFC not just the latest step in his MMA career, but his own personal Olympics after falling short of making the 2008 Games in Beijing.

“Let me tell you something, it was heartbreaking,” said Hein. “Making the Olympics is the dream of any athlete competing in an Olympic sport. My career started very well with two national titles in judo as well as winning the European Under-23 Championship in 2006, but I had the misfortune of competing in the same weight class and at the same time as arguably Germany’s best judo player of all time – Ole Bischof.

“I could win as many matches as I wanted, the national team coach decided he was the starter for Beijing and I had to accept that,” he continues. “Now, six years later, I get the chance to compete on the highest level in a sport that is even more complex than judo – mixed martial arts. I am truly thankful that the UFC has given me this opportunity.”

A pro since 2009, Hein has not lost since a September 2011 defeat to Sebastian Risch, with his most recent victory a unanimous decision win over Michael Erdinc in February. That’s a long time to stay unbeaten in this sport, but he whittles the reasons for his success down to two simple components.

“Hard work and surrounding myself with the right people,” said Hein. “Early on in my career I did not have the coaches, training partners and team around me that could lead me to peak performances. I was also thinking that I would be able to dominate in MMA easily thanks to my judo. My lone defeat in 2011 and changing teams a year later really opened my eyes in that regard. Ever since, I have been much more dedicated, hungry, and focused to prove all doubters wrong, and with that rekindled fire, it was just a matter of time until success came back.”

It was right on time, because he’ll need to be in peak form, not just for his Saturday bout against Dober, but for every UFC fight from here on out.

“In my opinion, the UFC’s lightweight division is one of the toughest divisions to compete in, period. Not just in the UFC or in fighting, but in sports in general. The talent pool is just that deep. There are so many great fighters that I’ve watched and admired over the years. Being a part of that feels just great and I can’t wait to start testing my skills against them. I’m at the pinnacle of my sporting performance ability and I want to fight with the best.”

And if you haven’t seen him fight before, he describes his style in quite an interesting way: “I’m a lightweight Johny Hendricks, without the beard.”

Call that just another reason to be intrigued by Sergeant Hein, who says of his primary influence, “The biggest influence in my life is the Lord: He is my rock, my fortress and my savior.” He also admires German judoka Udo Quellmalz, but at the same time jokingly cites “Dirty” Harry Callahan and Judge Dredd as influences in his day job as a police officer. So when it comes to star making, Hein’s rapid rise is no surprise, as he’s got plenty of aspects of his life and personality to draw in all demographics. But when it comes down to it, Hein doesn’t care about being a star; he just wants to be a winner.

“I won’t guarantee victory, but what I can promise is that I will fight until my very last breath and I will leave everything inside the Octagon.”