"He’s the next guy I need to prove myself against. We are
both top level and we win by doing damage, not by trying to score
points." - Nick Diaz 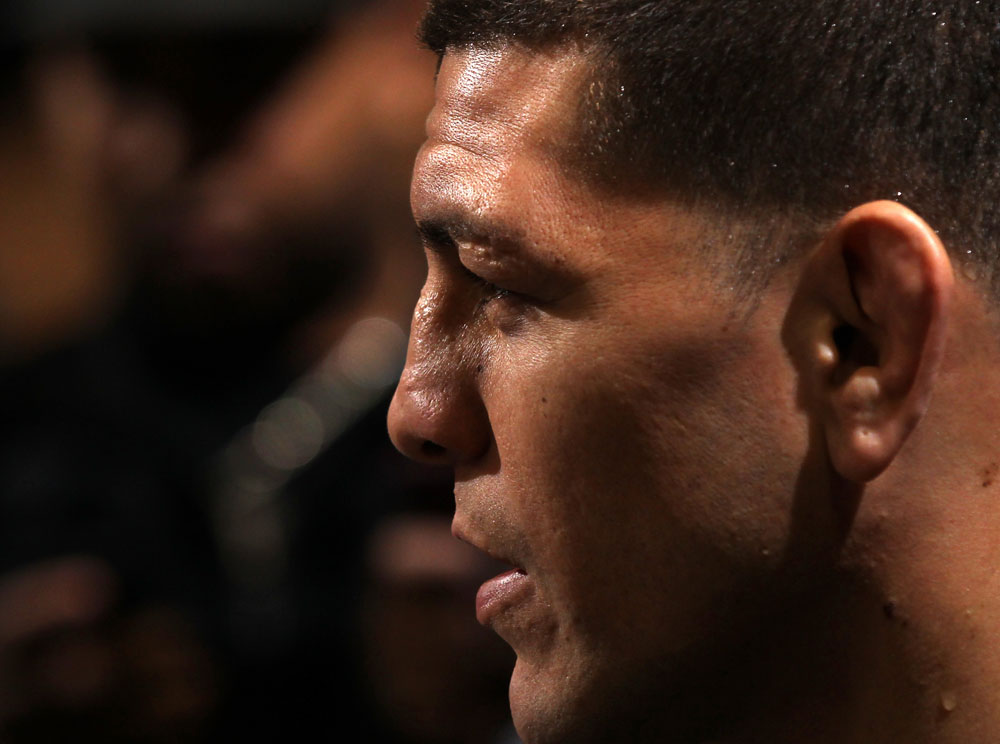 If you want to define the pure essence of the word “fighter,” odds are that eventually you will find yourself face to face with the story of Nick Diaz.

In many ways, he’s been fighting since his days growing up in California, moving from school to school and always being the new kid. It’s a story shared by thousands, but few have taken it as far as Diaz has – to the main event of UFC 143 this Saturday and a shot at the interim welterweight title against fellow contender Carlos Condit.

But for all the media attention and scrutiny around the 28-year old from Stockton since his return to the UFC late last year, all you really need to define who Diaz is would be a look at his second pro fight in July of 2002 against Chris Lytle. Yeah, that Chris Lytle, who at the time was already a seasoned vet of the sport. But when Lytle’s original foe, Jake Shields, was forced from the fight due to a staph infection, it was his 18-year old teammate, Diaz, who stepped in.

“This guy had something like 20 fights,” said Diaz in an interview before his 2011 bout with BJ Penn. “Chris was fighting in Japan, he was ranked in Pancrase, he was way older than I was, and I was supposed to lose.”

But he didn’t. Instead, Diaz pounded out a three round split decision that earned him his first title, the IFC welterweight belt, and truly started him on a career that he has had a love-hate relationship ever since. And though a lot of water has gone under the bridge since that day, he still has fond memories of his first big win.

“I think I was a lot happier when I won back then,” he said. “It was more about proving myself. Back then I really had something to prove and I really needed to be more than what I was. After those fights, I felt established in all sorts of ways. It was good.”

“When people would hear about who I was, they would pretty much think I was full of s**t,” he continues. “And even after these fights they would think the same thing, but at least I would know I’m not, and it was just enough for me to keep going.”

A jiu-jitsu player since he was 15, and a pro MMA fighter from 18, Diaz has spent more than half his life in the sport that made him a worldwide star, one of the best welterweights on the planet, and perhaps the game’s most intriguing figure. It’s a trio of titles that Diaz could probably do without, well, at least two of the three, and when it comes to being the best in the world, Diaz would likely enjoy that title if he didn’t have to deal with all the miscellaneous distractions and requirements that come along with it, like media obligations, etc. But he has no apologies for who he is.

“With me, you get the real me, real martial arts and a real warrior mentality,” he said at the media workouts for his fight with Condit. “I don't act friends with anyone I am going to fight. That's crazy, I don’t understand that. Some people aren’t mature enough to understand I don’t want to put on an act for the cameras. I’m real. I’m acting natural, I don’t want to be friends around a guy I am about to fight.”

You could chalk up such comments to Diaz being a hard man in a hard sport, and his mean mugs, and trash talking and taunting during fights do little to dispel that image. But we may not be seeing the full picture of the enigmatic welterweight.

“I don’t know how I come off, but I don’t like to hurt people, first off,” he said last year. “You get these guys like ‘I’m going through a lot and I’m real pissed off and I’m ready to fight and I just want to hurt somebody.’ I don’t say that and I don’t feel that. I don’t want to hurt anybody; I don’t want anybody to be hurt. I want to win, I want to come out on top, and I want to be in an exciting fight because I worked hard, but I don’t necessarily want anyone to hurt. That’s what I don’t like about fighting. I like the competition, I love it, but I don’t love fighting for money, because it hurts people.”

It may be why Diaz has been fairly reclusive when it comes to the media, and why he wants to keep his day job and his personal life as two separate entities.

“I’m trying to separate life and MMA fighting because they’re really two different things for me and that’s kinda rough for me to deal with and it’s probably been my biggest problem, more than the fights,” he said. “It’s my challenge to separate the two.”

So when he falls short of succeeding in that challenge, he’s left with two things – training and fighting. And with 11 consecutive wins constituting an unbeaten streak that has lasted nearly four years, it’s obviously something that has worked for him professionally. Personally? That may be another tale to tell.

“I don’t have any life, I don’t have anything else going on,” he said. “All these other people are like ‘oh, I have a wife and kids now.’ I don’t have any of that. I screwed all that potential stuff I had going for that up way back when I was too busy training to fight and acting crazy to train. Now I don’t really like the idea of changing what’s been working for me right now. So as long as I’m fighting, I don’t see things changing for me.”

Especially not with an interim title shot and the prospect of fighting current champion Georges St-Pierre right at his doorstep. But first he has to get by Condit, an equally hungry contender who has earned Diaz’ respect.

“He’s the next guy I need to prove myself against,” said Diaz. “We are both top level and we win by doing damage, not by trying to score points. He has a realistic fighting style like I do. Carlos is a very well rounded guy. He’s tough and it will be a fight.”

If Diaz emerges victorious on Saturday night, he will once again be the center of attention, something that has seemingly plagued him for years, but never more than when he missed two press conferences for a proposed fight with St-Pierre last year and saw the fight scrapped. He was eventually brought back into the fold for his UFC 137 bout with Penn, which he won via unanimous decision, and is now slated for Saturday’s matchup with Condit, which was originally going to be the GSP fight until the champion injured his knee and was sent to the sidelines. But during all of this, Diaz became mixed martial arts’ anti-hero, the most interesting man in the world not appearing in beer commercials.

It’s everything that he didn’t want, but with another stellar performance, the focus will be on his fighting and not everything else that he’s already put to the side to focus on his craft. On Saturday night, he could make his case for being the best welterweight in the MMA world, something that will only be proven as fact should he beat Condit AND St-Pierre. But he already has an endorsement from boxing’s best at 168 pounds, super middleweight champ Andre Ward.

“I've worked (sparred) with Nick and his brother Nate in the past,” said Ward, who was recently named 2011 Fighter of the Year by the Boxing Writers Association of America. “Both are extremely good boxers, and have a great feel for standup boxing. Nick specifically, is left handed, tough as nails and physically strong. That's why we work with him. I like Nick Diaz in an Octagon against anyone. I also feel he could compete in a boxing ring, if he so chooses.”

That’s the kind of respect Diaz wants. He’s not interested in photo shoots, autograph signings, or the bright lights. This is a fight. And if everyone else hasn’t figured that out yet, that’s not his problem.

“This isn't soccer, it’s fighting,” he said. “I've got no problem that this is a sporting event and being respectful, but it is a fight. It is what it is. It matters how I am seen by fans; sometimes I care, sometimes I don't, but when I think about it, I try to be real.”