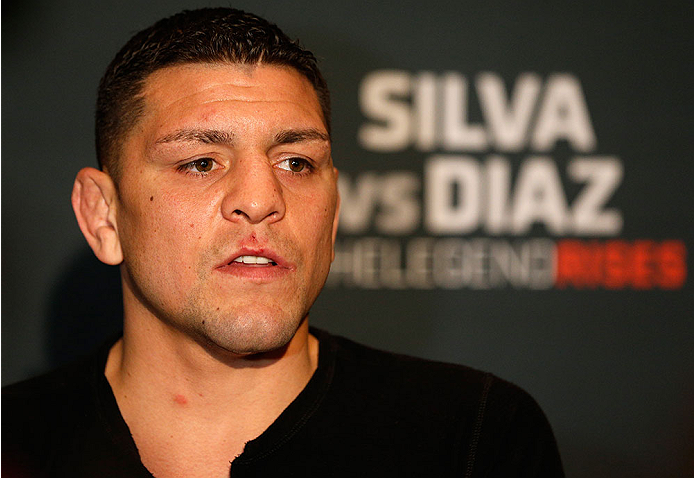 It’s 2pm Pacific time on January 20, and Nick Diaz is awake. That wouldn’t have been the case 30 minutes earlier, but Diaz never does anything like everyone else. That means training at night, sleeping in during the day, and doing it all over again, just like he has for 15 of his 31 years.

“I've missed out on everything that's going on in the day,” he chuckles, a fitting statement considering that eight days later, the headlines throughout the mixed martial arts world screamed about him missing the open workout for his UFC 183 main event bout against Anderson Silva.

It gets clicks, Twitter retweets, Facebook likes, and provides fodder for the readers of MMA forums, but when all is said and done, everyone knows that when the bell rings on Saturday night, Diaz will be there with gloves on and mouthpiece in, ready to fight. That should be all that matters, but at the same time, people still want to hear about the fight from the main eventer’s mouth, making all the media tours and press conferences pivotal to a bout’s ultimate success. Diaz, who was permanently cast as the “guy who doesn’t show up” when he was pulled from a 2011 title fight with Georges St-Pierre for missing a pre-fight press conference knows what is necessary, but also feels that the talking done in the Octagon should take precedence to that done beforehand.

“Who gives a s**t?” he bristles. “Does that have anything to do with me being a way better fighter than every other one out there? We've got all these guys that are amateurs out there compared to what I am. Full-on amateurs. Everybody gives everybody credit for stuff that they do that I was doing a long time ago. (Featherweight) Conor McGregor comes out and he's doing stuff that I was doing when I was 18 years old, and people weren't making such a big deal out of it then. They didn't really believe in what I was bringing to the table and they didn't know how to take it. And now when Conor comes out and does that now, they give him the red carpet. I never had no red carpet, even to this day.”

You wouldn’t know it from the reception Diaz gets from his loyal fanbase, a group of followers he appreciates simply because they appreciate him for who he is.

“That's not from the UFC or media or anybody putting that out there,” he said. “A lot of other fighters, their solid fanbase comes from marketing and advertisements and putting on a good look. Me, people are going ‘wait a minute, what's going on here? Why is this guy getting thrown under the rug, why is this guy the best in the world but they're not giving him the credit?’”

At 31, the Stockton native still has the fire he’s always had. He may not admit to it, but his desire to represent himself and the sport in his own way is as strong as ever. Whether he does one interview or a hundred, the point of it all is the fight, nothing more, nothing less. On Saturday, he fights the man who is widely considered to be the greatest mixed martial artist of all-time. But Diaz could be fighting anyone and he would still approach it the same way. Sure, the techniques and game plans change, but it’s still a fight.

“The thing is, I can fight,” he said. “I'm still young, I invested in my health and in mixed martial arts, so regardless of where I'm at, there's a minimum I'm going to do before entering into a fight. There's a standard I'm going to make it to at least, and I'm not going to come in at less than that. So whether my head's in it or I'm in it, I know what has to be done to go in and put on a half-decent performance. And I'm always going to do that. You see other fighters out there that haven't been consistent throughout their whole lives fighting. But I know what it takes so I can flip the on switch in time and do what I need to do.”

After Diaz’ 2013 decision loss to St-Pierre, fans weren’t sure whether he would strap on the gloves again. He said he was done after the fight and there was no reason to think otherwise. Eventually, he talked of coming back, but only for a big fight. Silva qualifies, not just for Diaz, but for “The Spider.”

“Anderson Silva took this fight with me because he's a real martial artist,” Diaz said. “He knows what's what, and he also knows who's selling the tickets. We're not trying to fool nobody, we're not trying to mislead the media into thinking I'm not one of the baddest motherf**kers there is. Anderson doesn't want people to think that I suck right now, and he knows that I don't suck. He knows that I'm not this mediocre fighter.

“The rest of the people don't know what to think because the media doesn't portray me the way that they need to or the way that they should. They like to portray me as a punk or a bad ass or a street thug, and it's not like that. I'm double intelligent compared to most fighters when it comes to mixed martial arts. They haven't spent half as much time dealing with this situation that I'm in, which is a really tough situation to be in. It’s my whole life, except for the last year and a half, two years after I fought Georges. And all I've been able to do in that time is sort out a sort of understanding for myself and try to present it to you or to other people so they can understand what's really going on here and not be misled or fooled by random propaganda.”

Some fighters need adversity to perform. They have to look in a mirror and see a crack there in order to put themselves through the rigors of training and then step into an arena to fight a skilled opponent who has prepared to beat them. The first time I spoke to Nick Diaz in 2005, before his bout against Diego Sanchez, he gave me his philosophy on fighting. Not on martial arts, but fighting.

“I just think in my head that the guy that I’m fighting had it easy,” the 22-year-old Diaz told me.  “They haven’t been where I’ve been and they’re not as crazy as I am and that’s the way it is.  You’re just not.  I know you’re not.  I know it.  That’s the way I think.  I know you’re not trying to get up out of this hell hole.  You’re just trying to be the best that you can be. I’m gonna come out of my hell hole and I’m gonna beat you.”

I read that quote back to him last week. He laughs, not a “ha ha” laugh, but more of an incredulous one.

“That was nine years ago,” he said. “That mentality was coming from nine years ago, and nine years later, I'm sitting in the same exact boat. If anything, things have gotten a lot worse as far as how I feel in that predicament. That sort of understanding could have me feeling really hostile at any point in time.”

He chuckles, knowing that as far as the public sees him these days, he’s a mellow 31-year-old just competing.

“I try to keep my mouth shut a little bit more, but I knew that and I felt that way back then, and I would just run my mouth in these things and do the best I could to shout out for someone to hear what I'm trying to say and people were saying 'this kid's crazy,'” he recalls. “People were saying I was illiterate and couldn't talk right, and that I wasn't comprehending this or that, and I'm like 'you guys are the idiots.' I've competed in jiu-jitsu, I've been with top-level boxers sparring at different gyms, I've fought the best fighters in the world. Who's not comprehending what? Who's under some sort of understanding and who's not?”

Diaz pauses, perhaps not content with the fact that no one outside his inner circle will ever really know him, but resigned to it. Bottom line though, he’s probably not what you think he is, no matter what that may be.

“I work a lot harder on what's going on for it to be just something that's not a big deal, for it to be just taken lightly,” he said. “And when I'm not presented correctly, it's hard to come out and make up for it with stuff like being a loudmouth. Then people end up with nothing and start calling me a no-show. It's really frustrating. To me, this is something that needs to get done correctly.”

So he controls what he can, and that’s his work in the gym. Even while away from the sport, Diaz would make the trek to train, not for a fight, but for himself.

“I had a lot of stuff to work on and not just fool around and go off to cupcake land the whole time I was off,” he said. “There was a lot of hard work and a lot of stuff to deal with. I had ups and downs in life out of fighting as well as in fighting. But you always have an excuse when you're a fighter. Then when you run out of excuses you're like 'wait a minute.'”

He laughs, knowing that when it comes to fighters, that may be the only thing he shares with his peers. If anything, he’s accepted that, but that doesn’t make him shake his head any less when he hears or sees certain things, or when he’s described as the guy who will fight anyone at anytime. That’s a concept he hears from his fellow competitors that he just can’t fathom.

“They're weird to me,” he said. “To me they're weird in general if that's really them, and number two, I think that's completely fake. I think it's a cover up. Realistically, they don't want to do that. They're saying that that's what they would do. A lot of fighters, like people, are really lost, and I don't like to feel that, so I figure it out for myself and once I figure it out, I can explain it to you. I'm not gonna sit here and go like 'yeah, I'll fight anybody,' and all this stuff. It's just the biggest meathead thing to say 'I'll just fight anybody, even my friends; I just love to fight.'”

Diaz has not been shy about his love/hate relationship with the sport, but as he approaches a pivotal moment in his career, he does seem to have a bit of peace with where he’s at. Of course it’s Nick Diaz, so it’s unconventional, but that’s part of the charm, right?

“I have nothing to prove,” he said. “I feel like my real career is all over with, like my whole drive to do things that I was doing five, six years ago, and fight for a title and all that stuff. If I'm put in a position to do that all again, that's just the way it is, but as far as right now, I'm just content and I’ve felt that way for a long time.”

Nick Diaz content? That comes with time, maturity, and knowing that you are giving the people something they are willing to pay for.