Nick Catone - Winning The Fight Before The Fight

"The day I don’t love it anymore, then maybe it’s time to step back and
just teach and run the gym. But as of now, I like getting up and pushing
myself, I’m constantly learning, and it’s fun." - Nick Catone 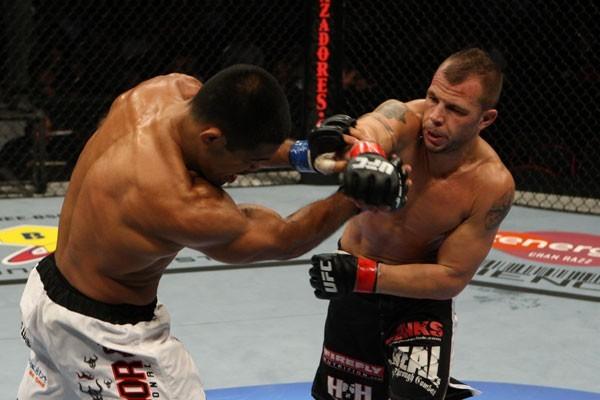 Nick Catone’s biggest fan won’t be at the Revel Casino in Atlantic City to see the middleweight prospect’s return to action tonight against Chris Camozzi in a UFC on FX preliminary bout, but when the bell rings, the fighter’s grandfather will certainly be in his heart.

“He’s one of those guys I think about when I need something to dig down deep and push through at times,” said Catone, prepping for his first fight since he decisioned Costa Philippou in March of 2011.

His 89-year old grandfather, also Nick Catone, is “not really too big on the fights,” according to the 30-year old from Brick, New Jersey, but the two have a lot more in common than that, and they share it almost every day during what has become almost a ritual of coffee in the morning.

“Ever since my grandmother passed three years ago, I started hanging out with my grandfather almost every day,” said Catone. “That week she was gone, I was hanging out with him every night and I used to turn on the Yankee games, and he was never really a big baseball fan and now, he’s a huge Yankees fan. I try to get over in the mornings because that’s the hardest time for him. He was always with my grandma in the mornings having coffee and stuff.”

Yet what may be most motivating for Catone is watching the patriarch of the family never stop moving and never stop living.

“He’s a big influence in my life,” he said. “He was a big part of helping me get my gym going, and he’s definitely a special person to me. He’s a stubborn guy, he’s 89, but he’s up and at it every day, driving down to the docks, crabbing. He’s got all his friends down by the boardwalk and he goes walking. Some days I don’t feel like getting out of bed. This guy’s 89 and he pushes through it every day and keeps himself active and busy, and I think that’s a big reason why he’s 89 and still going.”

If anything, Catone has needed that kind of inspiration as he waited out the roughest patch of his five year pro MMA career. After losing a razor-thin split decision to current middleweight contender Mark Munoz in August of 2009, he beat Jesse Forbes in January of 2010, but began getting plagued by injuries. He returned in March of last year to beat Philippou, but in the midst of training for an October fight with Aaron Simpson, disaster struck.

“I was doing sprints and I planted my foot,” he recalled. “I heard a pop and that was it. Four weeks out from the Simpson fight.”

It was Catone’s Achilles tendon, and injury he says “was probably one of the worst injuries I’ve ever had. I’ve had quite a few knee surgeries, my shoulder, my thumbs, and that was definitely the biggest setback.”

The injury was so bad that some people suggested that since he had already opened his gym, the Nick Catone Mixed Martial Arts Academy, and it was doing well, maybe it was time to step back from life as a pro fighter.

“Sometimes when you hear stuff like that from people it just motivates you more to get back quicker and get rocking and rolling again,” he said, and with the help of strength and conditioning coach Brian Blue, that rocking and rolling happened sooner than it does for most – four months to be exact. But once Catone was back to full speed training, there was a difference in a way he approached his time in the gym.

“I think it (the injuries) was just something where I’m always training too hard and too much and I’ve got to be a little smarter about my camps and listen to the body,” he said. “When you’re feeling a little rundown, that’s the time to take a step back, rather than trying to push through it. And I think that goes back to the old wrestling days. I was so used to training, training, training, and never taking a step back and letting the body recover. So in this camp, it was definitely something I wanted to be able to tell myself to do at times, which is sometimes hard still. In your mind you almost feel guilty if you’re not training six or seven days a week or sometimes getting a second one in, but I felt better this camp sometimes taking a day to recover and coming back the next day even stronger.”

And if Catone is back in his pre-injury form, the suddenly stacked middleweight division will have another standout in its midst, and after watching the 185-pound world go by for so long, “The Jersey Devil” can’t wait to get back in the mix.

“There’s a lot of tough guys,” he said. “I see Munoz moving up the ranks and me and him had a very close fight. Even Philippou is doing pretty well since we fought, so it’s definitely tough sitting back and watching these guys all move up the ranks and you’re at home and banged up. But I feel like I can hang with the best in the world. I’m just looking forward to this fight with Camozzi and I don’t really try to look too far ahead of anything. It’s whatever’s in front of me first, and we’ll see what happens after that. Sitting back and watching those guys move up definitely gets at you a little bit, but the cards are dealt, and the best thing I could do was get healthy.”

That part of it is done. The next part comes tonight, and if he goes in there, performs up to his ability and walks out of Atlantic City with a win, it will be just another reminder why he’s persevered and keeps fighting, just like his grandfather.

“I’ve been so competitive in my life, and it’s just hard to walk away and not have that,” he said. “Coming up a little short of All-American in college, I still got it in me and it’s still something that I love doing. The day I don’t love it anymore, then maybe it’s time to step back and just teach and run the gym. But as of now, I like getting up and pushing myself, I’m constantly learning, and it’s fun. It’s still exciting for me to get out there and have three, four hundred fans coming down to Atlantic City, and to get out there and put on a show and hopefully have a good fight. That makes it all worth it.”