“I'm looking forward to getting back in there, competing, the adrenaline rush, and putting it all on the line in there because it is do or die in the UFC.” 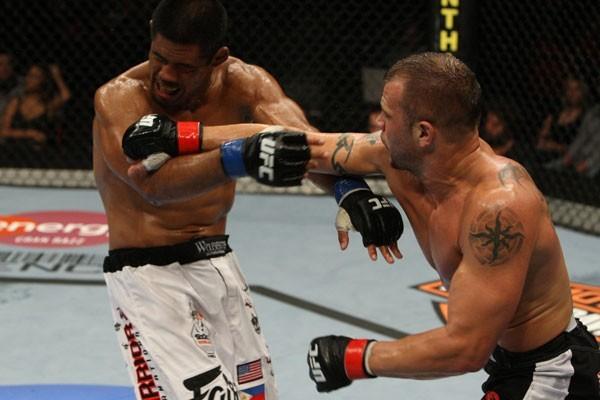 New Jersey is a state of fighters. It’s a swath of America raised on the heart of Arturo Gatti. It’s a length of tireless gyms housing the next generation of Frankie Edgars. It is a land of grit, determination and work ethic that produces a breed of athletes that do not relent and do not quit. It also has Buzz Aldrin, Bruce Springsteen, Princeton University, 127 miles of beachfront property and, on March 19th, New Jersey will have the UFC.

In just under a year’s time, the UFC will be hosting its second event at the Prudential Center in Newark, New Jersey. The night is stacked with high profile fights like the main event’s light-heavyweight title defense as well as an undercard featuring some of the toughest sons the Garden State has to offer. Nowhere is this more apparent than the middleweight showdown between the returning 8-2 Nick Catone and the rising 13-4, 1 NC Dan Miller.

As with most Jersey fighters, especially ones with local wrestling backgrounds, Catone and Miller know each other. “I've known Dan since I pretty much started fighting,” says Catone, who made his professional debut in 2007, like most in the state, in Atlantic City. “He cornered a couple guys on the first cards I fought on and he even wrapped my hands a couple times. We have a little bit of history, so it's awkward, but I think we'll still be friends afterward as well.”

“Friends” is a key word because Catone and Miller have known each more than just those few encounters years earlier. “During my first three fights with the UFC, I was going up and training with AMA like once every 2 weeks,” explains Catone about regularly training with his upcoming opponent at the AMA gym in Whippany, NJ. “I would see Dan up there and his brother Jim and Charlie Brenneman and all those guys. They've got a good camp up there, a good group of guys. I know his trainer and manager, Mike Constantino, very well and we're all friends.”

The Rider University graduate cannot sum up the feelings surrounding this fight any better, “It has put me in a tough spot, but it's a business.” It’s not personal. The UFC is an organization that houses the best of one particular sport: mixed martial arts. It’s a competition, and when it’s over, Catone and Miller can remain friends, but during it they’ll fight like rabid wolverines because that is what Jersey fighters are known for.

For the Brick, New Jersey resident this is also a chance for him to unveil a new and improved Nick Catone. The last time UFC audience saw “The Jersey Devil” in the Octagon was over a year ago at a UFC Fight Night on January 11, 2010. Catone was getting his hand raised via split decision after a well fought bout with The Ultimate Fighter season 3 alum Jesse Forbes. It was an action packed fight that started poorly for Catone, but he turned the tide in the later rounds with superior striking and solid takedowns.

“He broke my nose in the first 30 seconds of the fight. They switched my opponent on me a little over a week before the fight. I went from training for a right handed kickboxer to a good wrestler that was a southpaw. I didn't get a lot of training in for southpaws, so that whole first round my reaction time was off a little bit. Once I got into my rhythm I was able to control the fight and push the pace. He caught me pretty good in that first round. I sucked it up and still got my hand raised.”

The rest of 2010 was more or less a sabbatical from the UFC for Catone where he could focus on rehabbing injuries and training at a new gym. “In May, I hurt my back two weeks out from a fight doing strength training,” he says of the sidelining injury, which was three herniated discs. “That's something that will always be there, but it is about managing it. I've been doing all the right things to keep everything in line and it has been feeling good.” A few months later, the injury was aggravated in a failed experiment of cutting down to Welterweight.

The back injury was in part a blessing in disguise because at 29 years old, he finally had another nagging issue properly taken care of: his shoulder. “I was getting Cortisone shots for the past 18 months on it,” divulges Catone, noting that he had fought his four UFC fights with a bad shoulder that he just had the required surgery for last August. “I had a big cyst in there, some bone spurs and some arthritis. They actually shaved out a pretty decent sized portion out of the bone on my shoulder. Knock on wood, I’m feeling good and ready and I wish the fight was this weekend.”

Besides being healthy for the first time in the UFC, Catone is a part of a new gym, a new team and has had a lot of time off to improve his overall game. “I got back up with Ricardo Almeida and his team with new training partners, new boxing coaches, all new strength and conditioning program,” Catone enthusiastically reports about returning to training with Almeida and his camp in Hamilton, NJ. “Me, Frankie Edgar, Ricardo, Kris McCray we're all out three days a week doing strength and conditioning. It has been a whole different training regimen I've been putting together. I think I've made a lot of improvements and stepped up my game a lot.”

The old “Jersey Devil” was training pretty much by himself at a small gym. Now he’s in the weight room with the UFC lightweight champion and rolling with Jiu-Jitsu aces like Renzo Gracie, Roger Gracie and, of course, Ricardo Almeida. “We feed off each other and push each other to the next level,” asserts Catone, who clearly needed to join a fight team not only to make himself a better fighter physically, but, more important, mentally. “Before I felt like I was floating around always looking for workouts. Now, I'm in a routine with the proper guys. Everything is definitely improving.”

There are two more places where Catone has been putting his hours in these days: his alma mater and his own gym. “I like going out to Rider University, where they’re getting ready for the National Championships, which are in Philly the same weekend as the fights,” says Catone, who knows firsthand the unmatched grind and battle it can be in that or any Division I wrestling room. The other place Catone spends his time is new and has his name on the front door.

“I opened up my own academy, Nick Catone's Mixed Martial Arts, in my hometown, Brick, New Jersey, in September. I was down with my back and shoulder injury, so it gave me some time to open my own school. I’ve got everything from kids’ wrestling, Brazilian Jiu-Jitsu, Muay Thai, boxing. I've got close to 200 students now. It’s a big wrestling town and I've always had a huge following with that.”

This middleweight clash is bound to be an exciting showcase, with these two fighters with this history squaring off against each other. “We know each other and know what we like to do, but we haven’t trained together in a year and I think we’ve both improved a lot,” affirms Catone, declaring that his own training has been better and that Miller has experienced the cream of the crop opposition-wise since they last saw each other. “I'm looking forward to getting back in there, competing, the adrenaline rush, and putting it all on the line in there because it is do or die in the UFC.”

At UFC 128, the Jersey strong crowd will be there doing more than sporting supposed big hairstyles and bad accents. They will be there screaming their heads off for two of their very own. Two converted wrestlers with warriors’ hearts who will put a friendship aside for 15 minutes to compete in what they do best: fighting.